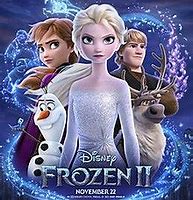 I walked into “Frozen 2” with my friend on opening weekend, surrounded by young children giddy with anticipation to see their favorite Disney characters, Anna, Elsa, Kristoff, Olaf, and the lovable reindeer Sven.

“Frozen 2” is a better movie than its predecessor with memorable music scenes and songs, meaningful story line and the heartfelt bond between the sisters.

The overall plot of both the original “Frozen” and “Frozen 2” center around the sisterly love between Anna and Elsa, that can save lives and “save the day”. This essential theme of non romantic love and its importance should be broadcasted in more media. The unconventional Disney princess movie where Elsa doesn’t need a partner to succeed, illustrates this message to young children of their own significance and power. The plot of “Frozen 2” is further developed with subplots with Anna and Kristoff’s romance, and the overall development of Anna as a character.

This film also pays more attention to Kristoff, Anna and Olaf as characters, bringing them more to the forefront along with Elsa. I found that refreshing because it showed off the whole cast and their different personalities, making the movie multifaceted and more entertaining. It lacks the focus on Elsa that the first film had, but I did not mind. I felt the development into all of the characters made it more enjoyable to watch and showed a broader range.

Furthermore, the humor throughout the film appeals to both children and adults with Olaf prancing around with playfully dark jokes and songs to make the entirety of the audience laugh.

Lastly, the soundtrack in this film is superior as opposed to the previous. The music plays an integral part in the film featuring songs from Elsa, of course, along with Kristoff, Olaf, and Anna. The music develops along with the film, integrating similar melodies and refrans to tie into the story line. The score is very well-written and conveys both comedy and heartbreak creating a soundtrack that both boosts the movie and can stand on its own.

“Frozen 2” is a more developed “Frozen” with the same lovable characters and sing-along soundtrack. “Frozen 2” delivers the valuable themes of love and family that provides entertainment for the whole family.

Accumulating over 1.3 billion dollars in box office sales, Disney’s “Frozen 2” surpassed its predecessor in taking the top spot for the highest grossing animated movie. For as much as the film was built up to be, I definitely felt that it is undeserving of its top spot.

Following the happily ever after of the first movie where Elsa has learned to control her magic and is crowned queen of Arendelle alongside her sister Anna, the original does not leave the audience with any loose ends. This raises the question of what direction the sequel will go in? To answer that, all over the place. Elsa and Anna find themselves in an enchanted forest where time is paused. They also learn more back story about their mother, and her childhood. Assuming this is the main plot, it is clouded by sub plots with magical caves, and resolving the curse of Arendelle causing the movie to be confusing and hard to follow.

“Frozen 2” does include more flashback sequences of young Anna and Elsa as well as flashbacks about their parents love story. The sequences also allow the audience to discover more details about how Elsa obtained her powers. Although the flashbacks give more insight into the characters, it overall just added to the jumbled mess of the movie. It felt as if there were multiple unconnected story lines going on at once. With such a busy plot it felt like each story line was fighting for attention and had barely enough screen time for the audience to make sense of it. If they wanted to make it a 4 hour movie, I’m sure they would have been able to go into appropriate detail the story deserved, but simply no kids will sit in a theater for more than 2 hrs.

While composer Roger Lopez managed to create artistic songs that captured the movies theme of staying true to oneself, “Frozen 2” songs were not even comparable to the first movie. I honestly could not remember any of them as I was walked out of the theater. “Into The Unknown” is probably the most comparable song from “Frozen 2” and still is able to showcase Idna Mezals amazing vocals, but it did not leave the same imprint that “Let It Go” did.

Although the soundtrack was second best, the autumn color palette made the movie theater screen come to life. “Frozen 2” definitely exceeded the original in terms of the magical effects.

Lastly, the returning actors’ voices were still pure perfection for the characters, and their voices were lovely, but the messy and complex plot took away from their talent. Olaf still gave the movie comedy for both adults and children. However; Kristoff did not really play a big part with the main action of the film. While I applaud this as highlighting  female dominance, his story arc was mostly just pathetic attempt to try and propose to Anna, and expected him to play a bigger role in the plot.

Unfortunately, when I waked out of the theater my mind was buzzing. I found the film very hard to follow and frankly just plain messy. I anticipated “Frozen 2” not being as good as the original “Frozen,” but I expected a little more than I received. From the unmemorable songs to the scattered story lines, this film ultimately felt like a rushed sequel just to make money. Taking into consideration that they had 6 years to produce this sequel, it was a major let down.