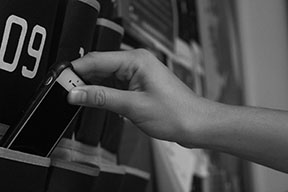 Student puts her phone in a phone pocket placed on the door of an English classroom before class (Fonseca/LION).

Nicole Lombardi, an English teacher at LT, was becoming concerned with students distracted by their phones in class, rather than learning the material. This frustration inspired her to reach out to other English teachers and approach a higher authority for clarity on the phone policies within classrooms, Lombardi said.

Teachers have realized that the policies in the LT student handbook clearly state that the presence of phones within classrooms is solely up to their discretion. Since LT administration clarified this, teachers have become increasingly more comfortable with the idea of students keeping their phones in phone pockets during the class period, Lombardi said.

“The phone pocket idea was very organic,” principal Brian Waterman said. “Teachers started using them in classrooms as a result of them trying to preserve that cell-phone free environment. I think we’ll continue to see this effort in a variety of classrooms where there is a high value placed on student and teacher discussion, and critical thinking and analysis.”

Zaria Giannotti Frye ‘21 was one of the many worried students who hoped the phone pockets wouldn’t become a common tool throughout classrooms.

“I would hate if this became more mandated, it’s that feeling of teachers thinking you have no restraint or responsibility,” Giannotti Frye said. “It kind of felt like I was in kindergarten again. When my English teacher started to explain the phone pocket system to us, I was like, do we really need this for 17-year-olds?”

There are still some teachers who don’t believe the phone pockets are necessary, or that they can potentially cause an issue with safety. English teacher Katy Melcher voiced her concern after a conversation that arose between her and her teen daughter.

“The Blue Point system could be activated and a student would get a text that included important information, but their phone would be in a pouch on the wall,” Melcher said. “In a hurry to evacuate the classroom, would students all run for their phones or for the exit first? I really took this to heart.”

Melcher has yet to implement the phone pockets in her own room, but is understanding of their purpose within the classroom.

“I am not saying that I do not have students who inadvertently check their phones during class or pull it out at the end of the period, but I try to be consistent in my message and expectations,” Melcher said. “I have told my students I will put up a pouch if it becomes a problem, so perhaps that has served as a deterrent.”

LT administration has not implemented this policy school wide, but for now teachers have the right to utilize one.