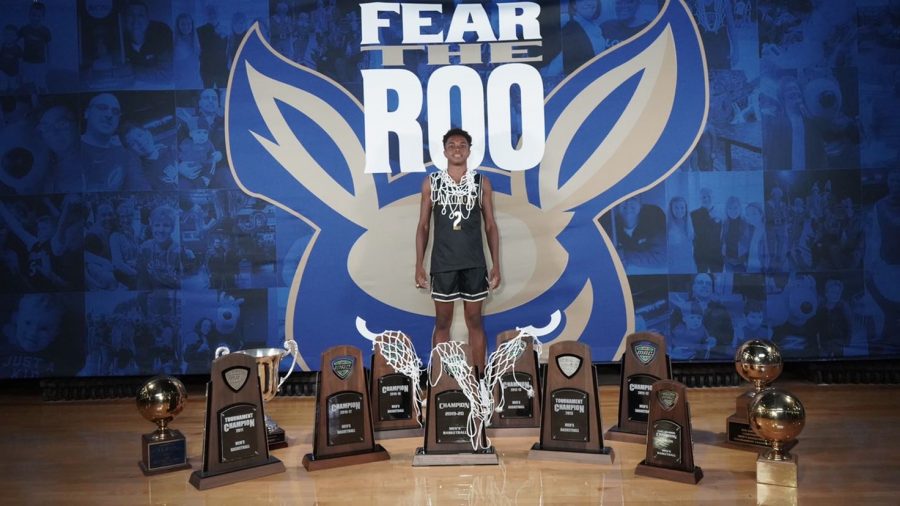 Lyons Township has had its fair share of college athlete commits this year, and Tavari Johnson ‘22 has been added to that list. Johnson committed to the University of Akron on Sept. 8, according to his social media post, and looks forward to a successful season, he said.

“My personal goal is to prove that I’m the best player to come through,” Johnson said. “There’s a lot of great players, but I know I’m capable of being in that category.”

Johnson has been training hard for this goal, ever since his days as a Park Patriot in middle school. That’s when Johnson connected with his current trainer, Dave Aldape.

“[He] has been my guy since seventh grade,” Johnson said. “I’ve been working with him since then, and we’ve built a great friendship with each other.”

Additionally, Aldape has gotten a job at the University of Akron where Johnson is set to go in the fall of  2022. On his instagram Aldape posts about training sessions with players like Johnson, perfecting their craft. These have benefited Johnson, who first played for varsity when he was a junior.

“I have been very fortunate to coach basketball at LT, and we have had a number of very good players come through the program,” varsity head coach Tom Sloan said. “Tavari is one of the most talented players we’ve worked with here.”

Sloan has embraced the recruiting process for Johnson as well, supporting him each step of the way, he said.

“Sloan has helped a lot with it,” Johnson said. “He allowed [coaches] to come to LT and see me workout. It’s been cool to see him build a relationship with them.”

When talking about the commitment, Johnson is more than thankful for the opportunity, he said.

Johnson has seen nothing but support, especially from fellow teammates such as Billy Bach ‘22.

“His leadership brings us together, and will help us win a lot of games,” Bach said. “His hard work is paying off and we’re all very excited for him.”

The varsity team is currently ranked top 10 in the state heading into the season, with high expectations. But rankings don’t mean everything, Sloan said.

“[Rankings] can be flattering, but can also be distracting,” Sloan said. “We will prepare by starting with the fundamentals and moving forward from there.”

The season officially starts on Nov. 22, as Lyons Township will host a Thanksgiving Tournament in the North Campus fieldhouse. The tournament will span from Nov. 22-24, with the team having games all three days at 7:30 p.m.

“I can’t wait for the season to start and to be able to play in front of my peers again,” Johnson said. “It’s going to be a fun but emotional year to hoop with my brothers for the last time.”

Notable games for the team this year will be against the highly ranked Hilltoppers of Glenbard West, taking place on Dec. 2, and the Downers Grove South Blackout game on Feb. 18. The team will look to make a run in the IHSA playoffs this year.