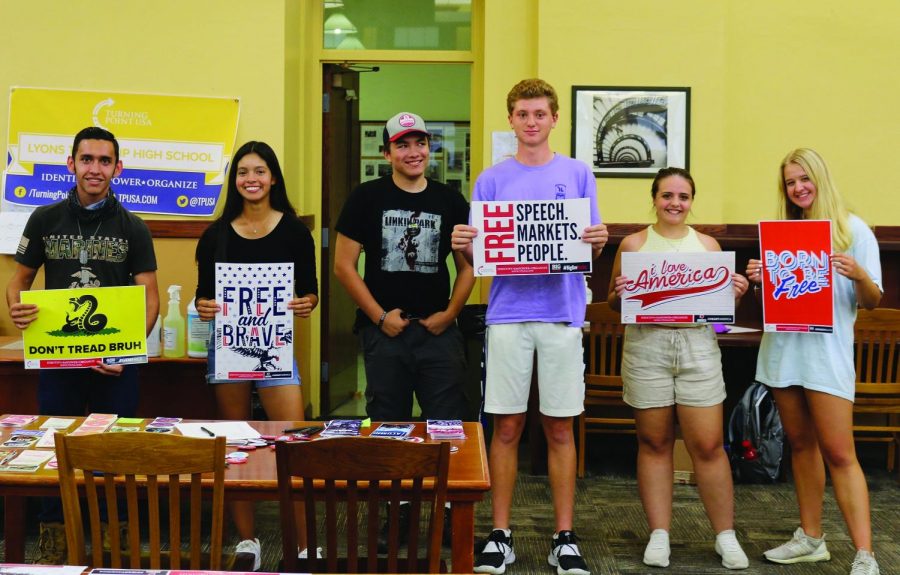 TPUSA club members and their president Leslie Mendoza '22 (second from left) at their first meeting held on Sept. 7 (Mahaney/LION).

The Lyons Township Turning Point USA (TPUSA) Chapter held its first meeting on Jan. 6. Founded by Leslie Mendoza ‘22, the chapter is affiliated with the larger nonprofit group Turning Point USA. The group focuses on teaching students about free markets, limited government, and the principles of freedom, Mendoza said. Since its first meeting the chapter has been working towards becoming a recognized club at LT.

“I want to give conservatives a voice at LT,” Mendoza said. “I think everyone should be able to speak their mind no matter where they fall on the political spectrum.”

“We have denied clubs in the past that have had proposals or the nature of the club be overtly partisan,” Director of Human Resources and Chair of the Stipend committee Ed Piotrowski said.

The committee did allow the club an opportunity to revise its proposal. More recently on Aug. 16, Mendoza stood up in front of the school board and parents to speak about the LT TPUSA chapter.

“There was a lot of energy in the air when Leslie was speaking and she had a real impact on the audience,” LT parent Molly Mcshane said.

In her speech Mendoza explained that her chapter was legally not partisan because it is a 501(c)(3) similar to many clubs at LT. 501(c)(3s) are nonprofit organizations that are exempt from taxes and can be charitable organizations or educational services.

In the community, many agree with the stipend committee’s decision to deny the LT TPUSA chapter’s bid. In the months after the chapter submitted its proposal, a petition was created to “keep hateful organizations out of Lyons Township High School”. There are currently over 600 signatures on this petition. The LT TPUSA chapter was one of the organizations listed.

“Although it’s definitely frustrating that the club is not being approved, we are still going to keep pushing [to be an official club],” Mendoza said.

Currently the LT TPUSA Chapter is allowed to meet on campus. They are not recognized as a club at LT and therefore do not have a sponsor or funds from the school. Their first meeting of the school year took place on Sept. 7, at 5 p.m., in room 251 at North Campus. Five students attended the meeting.