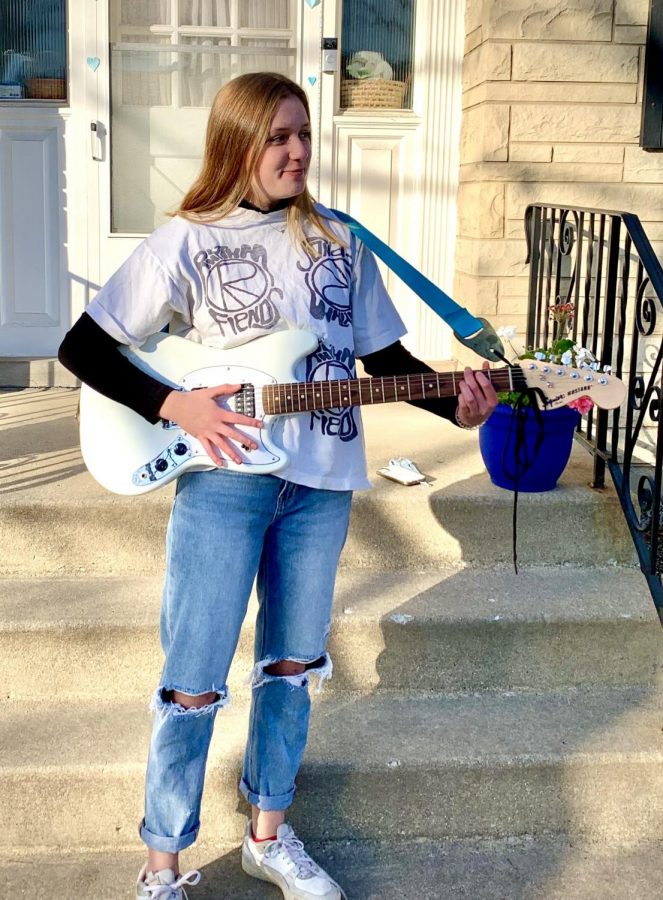 Ella Ruppert ‘22 realized how much she enjoyed creating her own music when she wrote and sang a song for an English project two years ago. Since then, she has released four songs—three of which are originals—on SoundCloud: “Mr. Tallboy,” “Soul Talk,” “Friends” and a cover of “Build Me Up Buttercup” by the Foundations. Her song “Friends” can also be played on Spotify and iTunes.

The songs that Ruppert writes fall under the alternative indie-pop category and typically include her voice, guitar, bass and a few other instruments in the background. She records her music on GarageBand and then uploads it to SoundCloud.

Ruppert tries to write songs that relate to real teenage experiences in order to appeal to a larger audience, she said. Her song “Friends,” for example, explores the sometimes blurred lines between friendship and something more.

“Any song can be great, but I feel that songs people can relate to really just hit home on a different level,”  Ruppert said.

Ruppert wants her listeners to know they are not alone, and all teenagers are going through similar struggles, Ruppert said.

“Being a teenager can be super confusing, but I hope I can show people there are always good moments,” Ruppert said.

Ruppert’s family and friends have been extremely supportive and encouraging of her music, she said.

“I was wowed and impressed by her song “Friends” when I first heard it, so I kept trying to convince her to release it,” Ruppert’s friend Katelyn Sommerfeld ‘22 said.

When Ruppert’s friend Keira Jensen ‘22 turns on Ruppert’s music, she forgets all of her problems she said.

“Ella’s music can completely change your emotions,” Jensen said. “When I am having a rough day I feel so much better after listening to one of her songs.”

Currently, Ruppert is working on a mini album set to be released in the next month. She plans to release five or six songs for the album.

“This album will focus on normalizing and shedding more light on issues in the world,” Ruppert said.

In the future, Ruppert would like to reach more people with her music. She isn’t sure if she wants to pursue music full time but is open to the idea, she said.

“There’s nothing stopping you from doing what you want to do in life,” Ruppert said. “If what you want in life is right in front of you, then just go for it.”