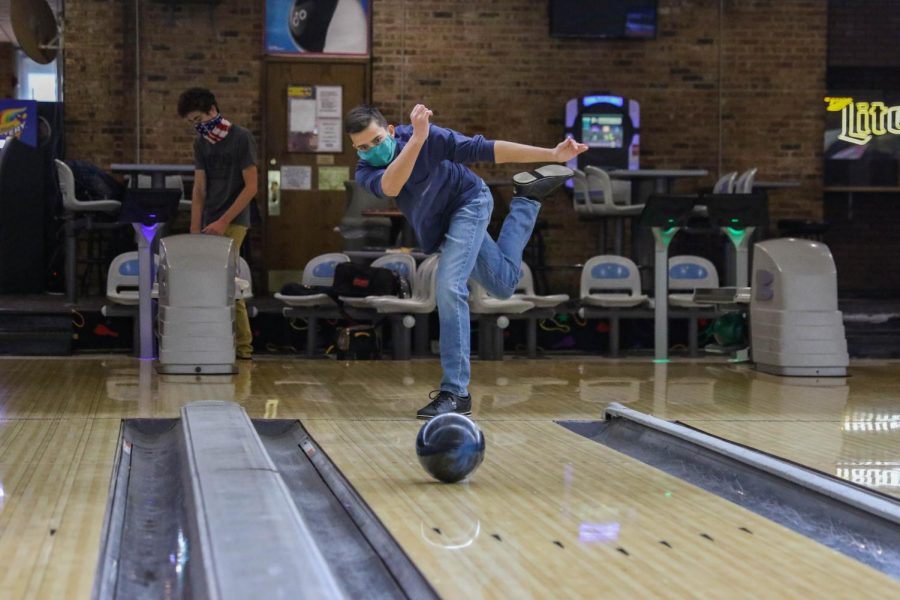 Matthew Skwarek ‘23 focuses on his shot at practice. (Kaitlin Preussner/TAB)

Daniel Hirstein ‘21 stepped up to the bowling lane with a nine strike streak, only three strikes away from getting a perfect score. The pressure was high with spectators starting to congregate to see what would happen during the first game on day two of the 2020 state tournament. Hirstein ended up splitting the pins and not being able to pick up a spare, but he still ended the game with a score of 260, the closest to perfect he’s ever been.

“It was a lot of pressure, especially being down at state, and that’s the farthest I’ve ever gotten for a perfect game,” Hirstein said. “So I think it was a pretty cool experience even though I didn’t end up getting the 300.”

However, members of the bowling team will likely not have state experiences like Hirstein’s this year due to COVID-19. All invitationals and plans for state have been put on hold and matches have been limited to their conference of three teams, which is greatly reduced from their previous competition of around 20, Hirstein said.

“I’m still looking forward to this season,” Hirstein said. “but it’s just not going to be as exciting with COVID[-19] and everything. It sucks that it’s my senior year, but it’s alright.”

The last season ended with a touch of disappointment for the team, as they missed making it to state by a very small margin, Firas Khuzam ‘21 said. Hirstein and Jackson Chadesh ‘20 individually competed at state, placing 36th and 10th respectively, but the team was hoping for a second chance at an opportunity for state this season.

“We did really good throughout the year, and we got really close to making it to state [as a team], but we just need to do a bit better [this year],” Khuzam said.

Varsity coach Gary Morrill is optimistic about the level of talent this year with many talented upperclassmen returning to play. The team is also looking to gain some freshmen at the Nov. 16 tryouts after the loss of seven key seniors.

“For the program to get better and sustain growth, we can’t just rely on upperclassmen,” Morrill said. “It’s more of trying to keep restocking the pond. I do have a freshman-sophomore squad, but I just don’t have the amount of kids that other teams have coming out, so it’s important that I find freshmen.”

As with most other activities at LT, nothing is certain, Morrill said. His main concern is being able to continue to practice with bowling alleys being dicey as a public establishment. Rising cases and the uncertainty of it all could easily decimate the season, and in the end they are subject to the governor’s decisions, Morrill said.

“[I’m] nervous,” Morrill said. “Nervous about whether we are going to have a complete season. Nervous on how everything is going to work, to be able to get matches for the kids, to be able to make sure that they maintain interest without having as many matches, without having the competition style that we’re used to having.”

Due to a rising number of COVID-19 cases, the bowling season has been suspended until further notice.