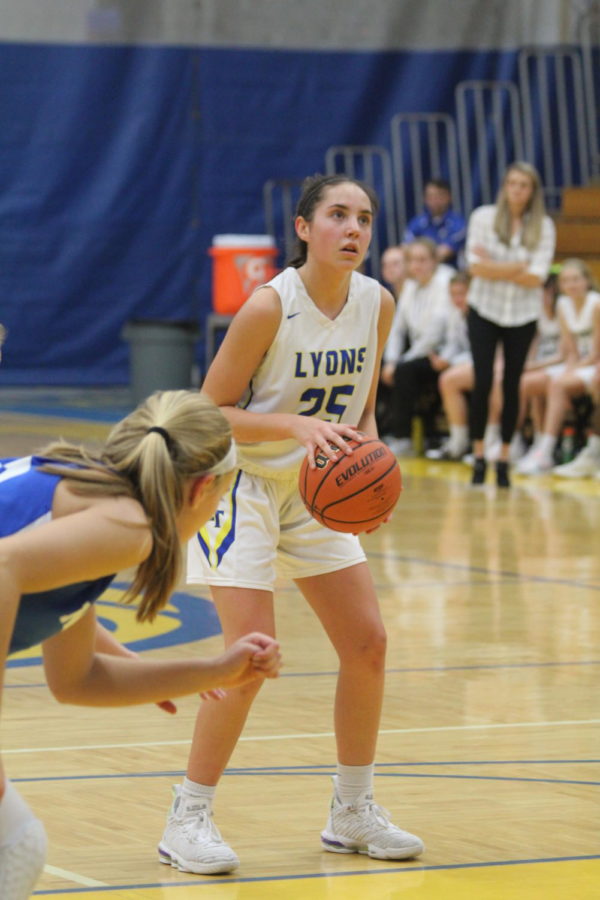 Hailey Markworth '22 shoots a freethrow during the tournament game against Wheaton North on Nov. 30 (Sorice/LION).

After placing second at the annual LT Thanksgiving Tournament, the girls basketball team, who now boasts a 2-2 record, will look to continue this success throughout the rest of the season. Their early victories can be attributed to the players’ hard work during practices, head varsity coach Meghan Hutchens said.

“The girls have been working diligently to perfect our team strengths,” Hutchens said. “As with any group we have, we expect our girls to get better every day and to consistently learn from mistakes.”

Entering the season, the team’s strength was expected to be quickness in the guard play and overall height, captain Linsdey Hahn ‘21 said.

Hutchens, however, thought the team’s leadership would be their best asset. Hahn is one of the five team-voted captains, the others being Lewis University commit Lily Courier ‘20, Ellie Kosanovich ‘21, Maddie Cranny ‘20 and Evelyn Purcell ‘20.

“We are proud that we have five girls that can bring our team together,” Hutchens said. “We expect so many of the girls to lead the team in different facets.”

Last year, the team, which consisted of only four returners, finished the season 14-15 with a loss in the regional finals against Saint Ignatius College Prep.

“It was good starting off the season with new people,” Hahn said. “Although, it took a while before we could all get used to playing together. ”

This year, the team has six returners. Even though this is more than last year, there will still be many new faces on the team.

“Part of the reason I’m so excited for this team is because of how awesome the newcomers are,” Hahn said. “We have some new juniors and also three lower classmen, all of whom will be great.”

With new talent on the team, the coaches implemented a big defensive change, Courier, said.

“We are doing way more conditioning than last year because we are going to be a full-court pressing team,” Courier said. “We are in really good shape and hope to tire out the other team who won’t be expecting us to press because we never have.”

In addition to their defensive changes, the girls have also put some of their preseason focus on the offensive side of the ball. Coaches have stressed game intelligence and understanding that although having set plays is important, players must recognize when the plays are not working and rely on their creativity, Courier said.

Moving forward, the girls will strive to win conference and avenge their second round playoff loss from last year, Hahn said. However, Hahn has another goal, one that expands beyond the court.

“Basketball season is my favorite season,” Hahn said. “Even my freshman year, starting it off was just such an enjoyable experience for me. I hope this year my teammates have as much fun as I do.”

The team will play its next home game on Tuesday, Dec. 10 against Proviso West High School in the NC fieldhouse.