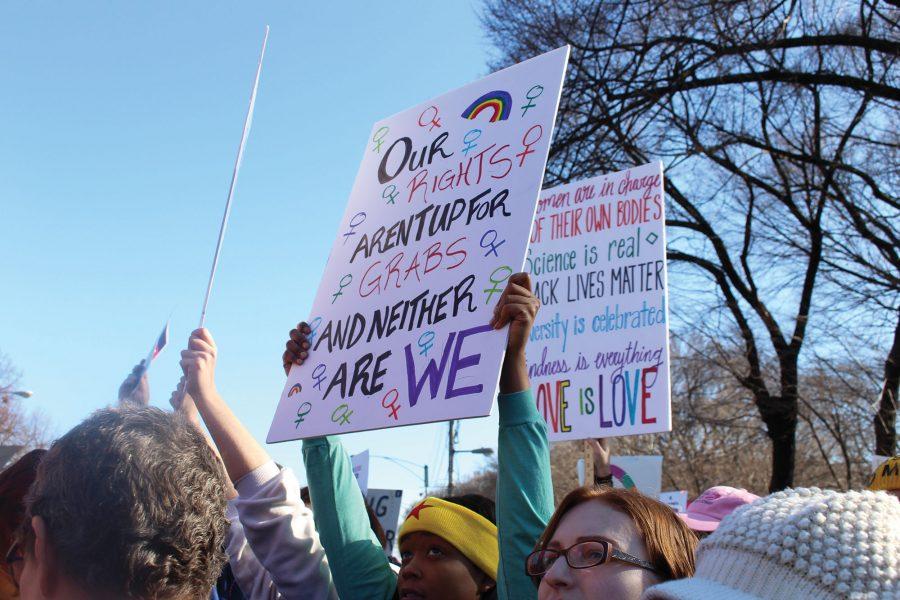 On Jan. 21, over one million men and women participated in the women’s marches across the nation. While there was an outpour of support there was also and overwhelming amount of hate aimed at “rabid feminists” and the “creeping global emasculation of my [the male] gender,” as British journalist Piers Morgan stated.

First and foremost, “feminism” is not a dirty word and calling someone a feminist is far from insulting.

Feminism is the theory of the political, economic and social equality of the sexes, as defined by Merriam-Webster dictionary, the keyword being equal. Feminists are not a group of women with a negative agenda; they are a group of women who are willing to take a stand and fight for equality.

While I am well aware that women today have more rights than they have had in the past, that is not so say that we have reached equality.

Yes, both men and women have the opportunity to further their education and attend college. However, according to the Sexual Violence Research Center, one in five women is sexually assaulted on a college campus as compared to one in 16 men, not including the 90 percent of sexual assaults that go unreported on college campuses. So yes, women have the same opportunity to attend college and earn a degree, they just have to be willing to compromise their safety and well being in order to do so.

Rape culture within the U.S. has progressively worsened though the years. Currently, one in five women will be raped at some point in her life as compared to one in 71 men. Yet, a majority of rapists will not go to trial and an even smaller amount will actually face jail time.

What message is being sent when Brock Turner is found guilty of three felony counts, assault with intent to commit rape of an intoxicated or unconscious person, penetration of an intoxicated person and penetration of an unconscious person, and only spends a measly three months in prison? Certainly not one that conveys the consequences that SHOULD come from a felony conviction. Certainly not one that expresses the severity of the affects that sexual assault leaves on victims and, most important of all, not one that brings justice to the victim.

Brock Turner’s case and cases similar to his convey the message that rape and any form of sexual assault is acceptable, they allow the rapist to walk, unaccountable for their actions, disregarding the trauma that faces the victim.

This is why we need feminists. This is why we need brave men and women to open their mouths and demand change. The women’s march was for the victims- both female and male- who were not given justice following their sexual assault.  The women’s march was for the men and women in and out of the U.S. who are sexually assaulted and overlooked, going unreported and unnoticed.

According to Forbes, on average, women make only 80 cents to every man’s dollar. So yes, women can work, they just have to accept earing substantially less than their male counterparts.

Additionally, only four percent of CEO positions at S&P 500 companies are held by women, According to catalyst.org.

As you can see, the glass ceiling is still extremely heavy. It is 2017 and we have yet to see a female president, and according to the Center for American Women and Politics, only 19.4 percent of the U.S. Congress is made up of women.

This is why we need feminists. This is why men and women march: promote female empowerment and make an effort to break down the glass ceiling that suffocates the workforce, to send the message that, yes, we are women and, yes, we are strong and, yes, we can hold any position and accomplish anything we put our minds to.

We need feminists to protect the fundamental rights that we as humans are all entitled to and to remind people that everyone has the right to be in control of their body.

Men and women march for reasons bigger than themselves. They march for the equality of all races, genders, sexualities, religions and disabilities.  Feminists aim to put an end to the oppression and injustice that people too often face. Their goal is not to put others down, but instead empower those who are oppressed to take action and advocate for their rights.  Feminists create a voice that demands change and equality.

America was built by those who were brave enough to take a stand and fight for change. Equality is an issue simple enough for 8-year-olds to understand, yet it has been prevalent long enough that 80-year-olds have been fighting for it all their lives.

It is 2017. Change is no longer optional, it is necessary.