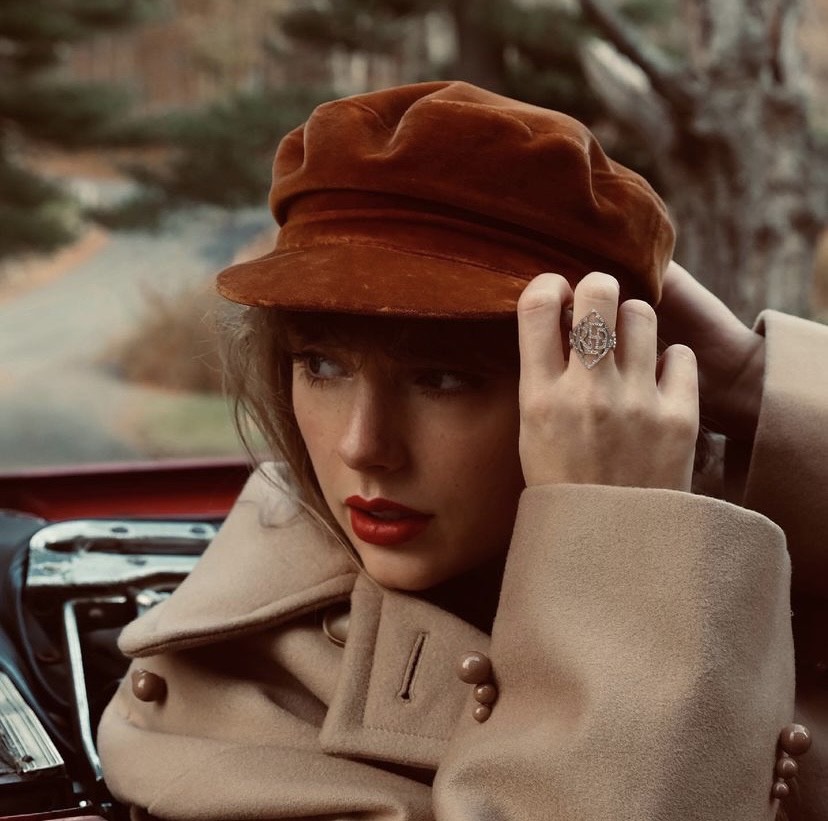 Album cover for “Red (Taylor’s Version)” which came out on Nov. 12.

I was ecstatic for this album, but when I started listening to “Red (Taylor’s Version),” I think I broke a rule. Instead of listening to the entire album, I immediately listened to “All Too Well (10 Minute Version) (Taylor’s Version) (From the Vault).” It was long, but the second it started I was blown away. You could say that I was not fine at all. “All Too Well” is a fan favorite, so I could hardly wait to hear it. I think it is the best song on the album, but I miss the anger the bridge has in the original. In the 10 minute version, I was able to find the same passion in different places, so the extra verses made up for it. The lyrics were amazing. My favorite part of the song is when she sings: “And did the twin flame bruise paint you blue? Just between us, did the love affair maim you, too?.” These lyrics are full of so much emotion and are some of my favorites of all time.

On my first listen of the album, I thought the re-recordings lacked passion; however, on my second listen, I enjoyed the album a lot more. The songs weren’t bitter anymore, which makes sense considering many were about a heartbreak Swift experienced ten years ago. Most of the songs on “Red” are theorized to be about a past relationship Swift had with Jake Gyllenhaal. Since the pair split up years ago, it makes sense that the original anger would be absent. When I compared both versions of “Red,” I could hear growth in Swift’s music and as a person. My favorite songs on the re-recording are “Treacherous (Taylor’s Version)” and “The Last Time (feat. Gary Lightbody) (Taylor’s Version),” which I feel like I never really appreciated when “Red” originally came out. I greatly appreciate the re-recordings for giving me another chance to fully absorb more of Swift’s music.

When I wasn’t listening to Swift’s music on Nov. 12, I was watching the premiere of “All Too Well: The Short Film,” which Swift wrote, directed and performed in. She cast Sadie Sink and Dylan O’Brien as the main characters, of which fans have speculated play a young Swift and Gyllenhaal. Their chemistry was off the charts, and their characters and emotions were incredibly well developed. All of the shots from the film were really well done, and there was never a dull moment. The short film was a combination of scenes performed by Sink and O’Brien and the lyrics from “All Too Well (10 Minute Version) (Taylor’s Version) (From the Vault).” I have watched it multiple times since it was released, because I am still so in awe of it.

On Nov. 15, Swift released “I Bet You Think About Me (Taylor’s Version) (From the Vault) (Official Video),” directed by Blake Lively. The color scheme she used during the video was really interesting. The music video is set at a wedding, and everyone except for her is wearing white. Swift wears red, of course, and the groom at the wedding wears a traditional black tuxedo. When the groom reminisced about his past relationship with Swift, she came in wearing a white wedding dress that then became red, and I thought it was breathtaking. It gave her so much power. I enjoyed watching the music video, but I have seen her do better, like in the “You Belong With Me,” “Blank Space,” and “Look What You Made Me Do” music videos.

Fans of Swift also received a surprise drop of “All Too Well (Sad Girl Autumn Version) – Recorded at Long Pond Studios” on Nov. 18. This was similar to “All Too Well (10 Minute Version) (Taylor’s Version) (From the Vault).” It had a sadder tone than the original ten minute song. I enjoy both versions.

The release of “Red (Taylor’s Version)” has been full of surprises, and I’m living for it. Listening to her songs on Spotify and watching her premiers on YouTube has kept me incredibly entertained. I’m infatuated by her unpredictability, even when she’s re-releasing her old music. I really enjoyed this album because of how ambiguous she was before the release, and how the surprises never seemed to stop.