‘Curb Your Enthusiasm’ returns with a much anticipated 11th season 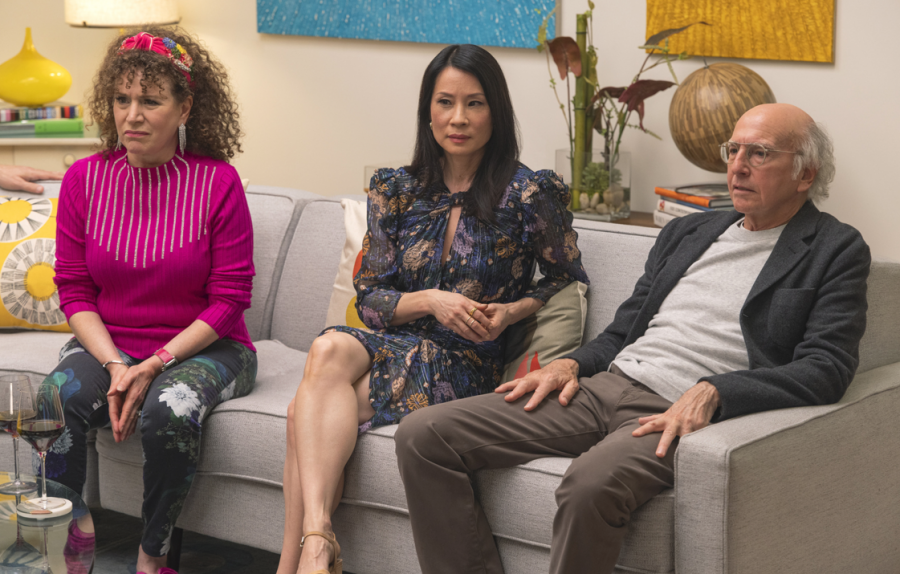 Left to right: Susie Esseman as Susie Greene, Lucy Liu as herself, and Larry David as Larry David at a party with the typical companions of the show (out of shot) (photo courtesy of Tribune News Service).

he 11th season of the show, “Curb Your Enthusiasm,” (Curb) created by Larry David, has returned for the first time since the last season premiere in 2020.

The show stars David himself, who plays a nitpicky and obnoxious version of himself. For instance, if he deems someone’s consumption of appetizers to be over the unspoken allotment, he will say so (as displayed in season nine). This often leads to comedically awkward and frustrating situations.

The new season of the show takes on a more modern approach (similar to how it has been for the last two to three seasons), but thankfully refuses to lose the unapologetically direct comedic style that made it so popular to begin with.

The first episode of season 11 premiered on HBO and HBO Max (the channel’s streaming service) on Sunday, Oct. 24 at 10:30 p.m.. New episode debuts will follow the same schedule.

The show’s history is as interesting as the characters it features. When David felt his ideas for the show’s storyline wouldn’t be good enough, the series took a six year break starting in 2011 and lasting until 2017, according to Vox. This means most of the show takes place before 2011. For some shows, a long break may not have been a good thing, as the characters of the world are forgotten. However, for Curb, it only added to the reality of the characters as the world and their environment changed radically.

However you look at it, eight seasons is a long time, where the audience becomes intensely acquainted with the characters. Thus, the seasons after season eight have a different vibe.It doesn’t feel like a new show, but it certainly feels like a different climate. It is because of the previously established strong connection to the characters, that the show retains its previously held magic. The show feels unchanged and is still just as hysterical as ever.

This method of maintaining consistent characters should mean that no matter the direction the show takes, it will remain funny. The main question becomes: does it pass the test? In my opinion, it most certainly does (if the first four episodes serve as any representation). I look forward to what the rest of the episodes entail.