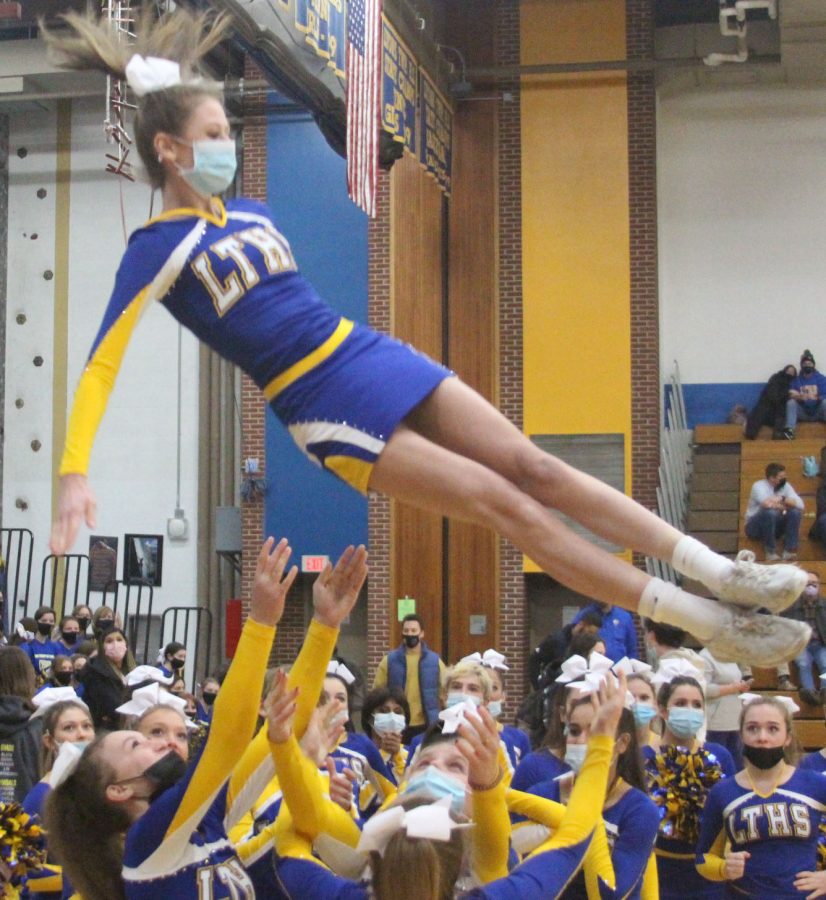 With the new year comes new changes, especially for LT’s competitive cheerleading team. This competition season is quite different from the previous one, since they can finally compete in- person and perform on the sidelines at basketball games. Last competition season, due to COVID-19, the team had to send in videos of their performances and weren’t allowed to do stunts; only tumbling, dancing, and jumping were permitted.

On Jan. 17, they placed second overall at the Western Suburban Conference, and first for varsity co-ed at Hinsdale South High School. However, leading up to the competition, the group had to run practices and strengthen the team on their own, as a coaching change was in progress.

“We had to put in 10 times more effort when practicing without coaches,” Flyer Clay Healy ‘23 said. “We had to prioritize making sure we would be the best we can be when competing.”

Leading up to competitions, the team had to put all their focus on cleaning up routines, and simplifying stunts for better clearance, Healy said. They needed to stay consistent and feel confident in their performance.

“While we feel there’s always room for improvement, we were proud of our 9.8 score on our pyramid,” Healy said. “With having new coaches, that leadership got us closer to our goal of making it to state.”

LT achieved that goal, making LT history and attending state on Feb. 4. They placed as one of the top 25 teams in the state, however they didn’t qualify for the second day.

Varsity head coach Sharon Lupo, hired midway through the competitive season, has been coaching cheer for 15 years; however this is her first year coaching a high school team.

“It’s a little tricky coming to the team mid-season and walking into someone else’s routine,” she said.

With many thoughts and ideas from the cheerleaders and coaches, they critiqued parts of the routine together. Coming from Lyons Football Club (LFC) recreational cheer, Lupo had many new rules to learn in a short amount of time.

“The cheerleaders have adapted amazingly to the coach change,” Lupo said. “I believe the team was ready for a change and it makes me so happy every time they thank me. I am so happy to help them out.”

For the few days that the team didn’t have coaches, they were told that they might not be able to finish the season at all. This was very stressful, according to secondary base Annabella Giovingo-Mino ‘22, because they spent lots of time and effort practicing their routine and would be devastated if they never got to compete together again.

“With all of the sudden changes, it showed us that no matter what happens, we can all stick together, work together, and improve together even with no coaches, or new coaches,” Giovingo-Mino said.

Aside from the coaching change, the team has continued to get stronger and stronger,  Giovingo-Mino said. This year, the team is a lot closer, which makes practices easier and more fun.

Giovingo-Mino has been cheering since her freshman year and had 10 years of gymnastics experience prior. With this being her last cheer season, she’s going to miss the little things about the season. She loves watching videos from practices and competitions to see the difference in confidence and skill, and  how much her teammates have all changed in such a short amount of time. It feels like a reward to her, she said.

“I think team sports like cheerleading teach you a really valuable lesson of working with others,” Giovingo-Mino said. “It’s hard to progress if everyone isn’t working together.”