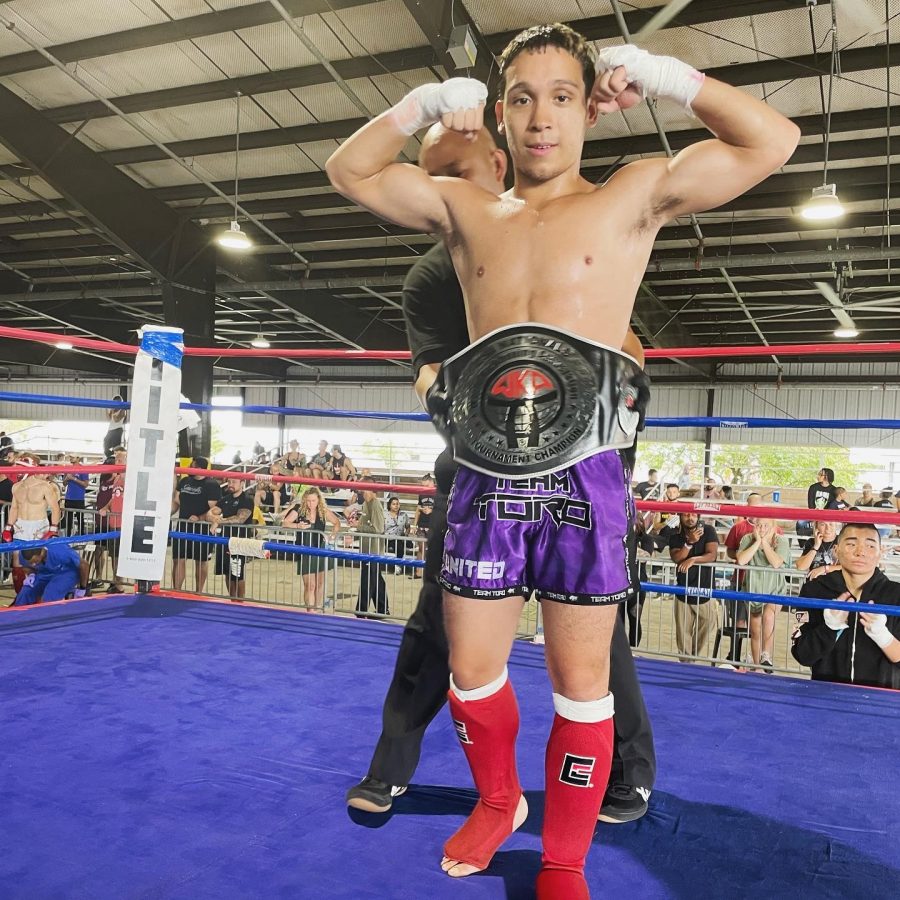 Eddie Camana ‘22 first walked into Team Toro Muay Thai gym in Westmont in March of 2020. After he was unable to continue boxing at his previous gym, which was shutdown due to COVID-19, Camana was eager to find a way to fight again. Although that meant training in a different capacity than the boxing he was used to, his decision prompted him to find a newfound passion for Muay Thai, he said.

“Boxing can get a little bit personal [between you and your opponent],” Camana said. “Muay Thai has a community all about respect, which I like.”

In a Muay Thai match, two fighters are against one another in a ring and wear gloves, just like in boxing. However, the difference between the two, is that fighters can not only punch, but can also kick, elbow, and knee their opponent, Camana said.

When Camana first expressed his desire to compete in Muay Thai to Team Toro owner and professional Muay Thai boxer, Ricardo Perez, he wasn’t sure if Camana would follow through with his goal.

“Some people say that they want to compete [in Muay Thai], and then they start training and realize it’s too much for them,” Perez said. “However, within a month of training Eddie, I could tell he was going to be a fighter.”

Camana trains at Team Toro for two to three hours every day except Sunday. In addition to working on his hits with padding Perez holds out, Camana also works on strength and endurance to prepare for his fights, he said. Perez has him lift weights, work with straddle boxes, jump rope, and run three to five miles a day on his own time.

So far, Camana has completed six fights. He competes in shows and tournaments throughout Illinois, as well as out of state and national fights. A show is a single fight and typically has an exciting atmosphere with a DJ, party lights, and even liquor for those 21 and over, while tournaments consist of multiple fights spread throughout a day or two, Perez said. Each fight lasts around two minutes.

Camana has found much success in his competitions, even though he has been involved with Muay Thai for less than a year. On June 19, he won the biggest Muay Thai tournament in America, the Thai Boxing Association (TBA) tournament in Iowa, where nearly 1.000 fighters came from all across the country. In addition, he won the World Kickboxing Association (WKA) tournament on Aug. 27-29 in Delaware. Most recently, in October, Camana was named national champion and won a belt at his first ever show in Guatemala.

“Winning the TBA tournament was good and all, but getting national champion [in Guatemala] was very exciting,” Camana said. “[However], my biggest accomplishment is probably WKA.”

Camana’s performances at the WKA national championships qualified him for the WKA World Championship in Ireland, where he will represent Team USA in October of 2022.

In addition to working on his own fighting, Camana has found much joy in teaching others Muay Thai, he said.  He helps out with the children’s classes at Team Toro, and was also able to teach a seminar to students of all ages at a gym during his trip to Guatemala.

“The whole experience [in Guatemala] was interesting to see a different environment than in America,” Camana said. “It was humbling to see the way people live with the poverty out there.”

Camana plans to attend college, while also getting the experience necessary to go professional, and possibly the Olympics one day.

“Not only is Eddie a good athlete, but he is just a really nice person,” Perez said. “He’s dedicated, very well mannered, and just has the whole package. I’m excited to see where he goes [with his Muay Thai career].”