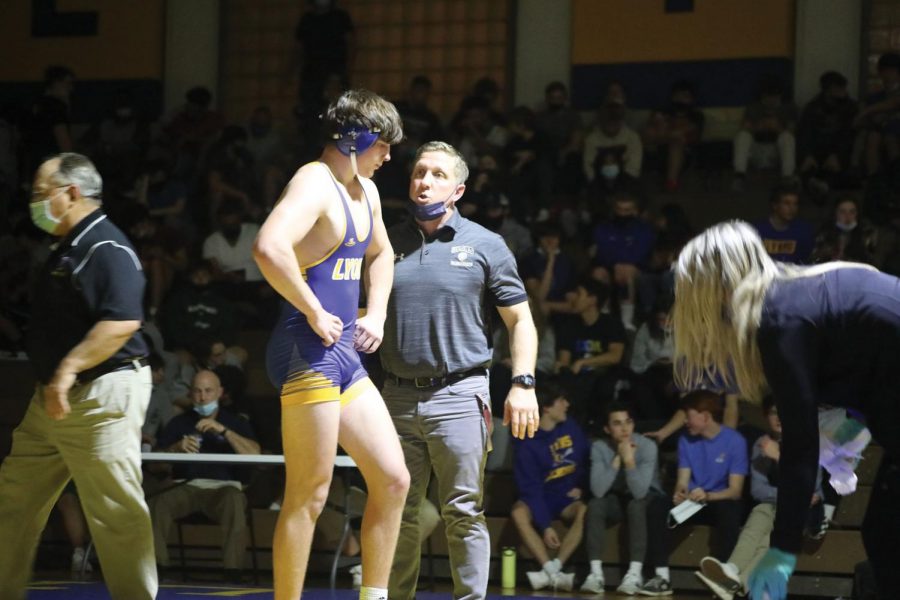 Returning from last year’s short season, the LT boys wrestling team is eager to get back to the Vaughan Gym. Due to COVID-19, their season only went from mid April to mid June last year. This season, varsity head coach Griff Powell, carries on with his 17th year of coaching wrestling at LT. Prior to coaching, Powell wrestled for nine years, including at the University of Illinois.

“With all the things that we were dealing with last year, as a coach’s association, we went to the IHSA and brought a proposal asking if we could get shifted as far into the school year as possible,” Powell said.

“It was the first time for a lot of those guys to ever have been in the varsity lineup,” Powell said. “ We just wanted them to go out and compete as hard as they could.”

One of LT’s two captains, Cooper King ‘23, wrestled well at the Barrington invitational on Nov. 26-27, according to Powell. King made it to semifinals at the tournament the second day, but injured his knee and was unable to wrestle at his full potential. However, he carried many strengths through the tournament, like being able to move quickly and score fast on his feet, King said. Although he was very impressed with his performance in this tournament, there are still things he is looking to improve on, he said.

“I need to be better with not letting my opponent control ties, and not let them turn me when I am bottom,” he said.

Varsity assistant head coach and King’s grandfather, Mark King, has been coaching wrestling at LT for almost 50 years.  With all of the coaching experience, comes many achievements. He was selected as Illinois Wrestling Coaches Association Coach of the year in 1992 and inducted into the Illinois Wrestling Coaches and Officials Association (IWCOA) Hall of Fame in 2002.

LT’s other captain, Cooper Schodrof ‘22, like many other wrestlers, has set a goal to qualify for this year’s state tournament, he said. Along with that, Schodrof is aiming to achieve 35 or more wins. The biggest challenge he had to face with wrestling during COVID-19 was the absence of fans at meets last year.

“It’s harder to get pumped up or as motivated without  [the fans] to cheer you on,” Schodrof said.

As it being his last year on the mats, he is going to miss the fans and the wins that brought him so much happiness, he said.

“I’m most excited about ending my wrestling career on a good note,” Schodrof said. “I am looking forward to leaving everything I have on the mat this year, to see what I am made of.”