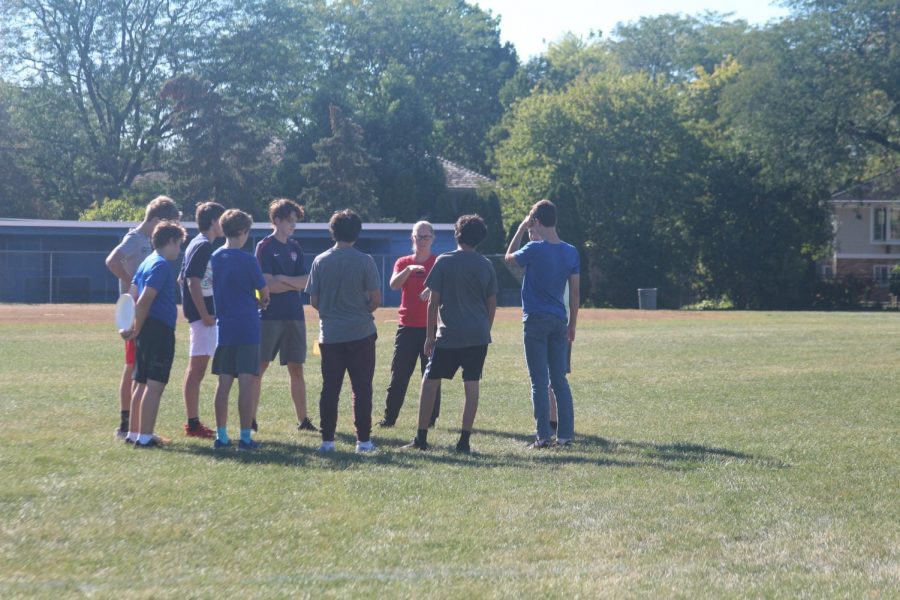 For the past five years, Emilee Ledonne, head coach of the Ultimate Frisbee club, has worked with the students of LT to support and promote the sport that she’s played for the past 25 years, she said.

“I started a club team in Chicago that I coached and played on for 15 years,” Ledonne said. “Then I started a middle school team and then a high school team. My kids started being able to play, so I wanted to make a team for them.”

The Ultimate Frisbee club opens the doors for students to learn the game, which could be described as a combination of soccer and football, she said. Practices occur Tuesdays and Thursdays after school, behind the Corral at South Campus. There are currently two teams, JV and varsity, that are essentially divided based on what campus a student attends. Technically a spring sport, the team plays all year long, attending tournaments scattered throughout the year.

In a typical game, two teams face each other to try and score points by catching the frisbee in opposing endzones, she said. Ledonne’s daughter, Lily Ledonne ‘23, has been playing for the past few years and has enjoyed watching the progress of the LT team.

“We work well together now, because we’ve all been playing together for three years, but at the start it was kind of hard to work together,” Lily said. “Our team’s gotten a lot better, so we’re starting to be against better teams.”

The varsity team plays in an adult-league every Thursday. Additionally, the team’s been playing some tournaments around the area since practice started up again. By utilizing this time before the spring season, they’re sure to benefit from it in the long run, she said.

“We’ve been doing okay so far,” Lily said. “I think this practice will help us prepare for later [in the season] because some of the other schools haven’t started their seasons yet, so we’ll be able to get a head start and be more prepared than them.”

Similar to Ledonne, Connor Sandman ‘23 had a familial influence when it came to trying out the sport and utilized his open schedule from the past year to join the club here at LT.

“My dad played for Chicago’s club team, so that’s something I’ve always been in the loop with,” Sandman said. “I’ve thrown around with him since I was little. It’s always been something a part of my life.

During this past summer, Ledonne and Sandman were members of the Illinois Youth 20 Mixed Team at the Youth Club Championship, a national tournament that took place in Blaine, MN. The three day tournament took place from Aug.7-9, and allowed the team to benefit from watching and challenging players from all over the nation, he said.

“It’s definitely really fun getting to be exposed to more high level players,” Sandman said. “[The tournament] was a really great way to grow as a player and as a team.”

As coach, Ledonne encourages anyone interested in learning more about the craft or wanting to play to join whenever they can, she said.

“Anybody can come play whenever,” Emilee said. “It’s open, so if [you] ever want to check it out, we’re every Tuesday and Thursday right after school. It’s really fun and competitive.”