Both runners finish marathon in under five hours, check off bucket list goal 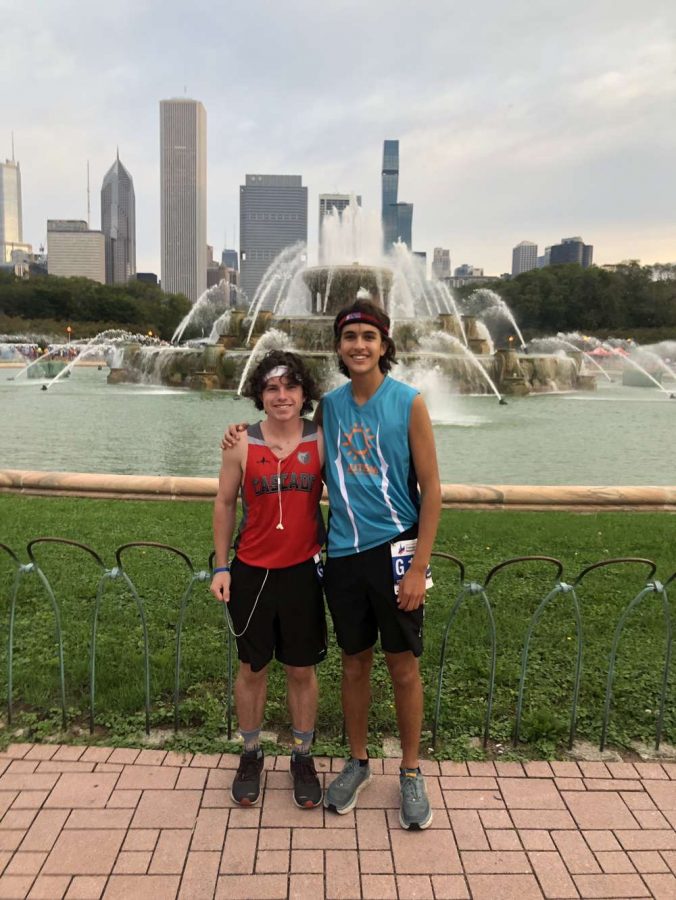 After a quick chat with each other in January of 2021, Tiernan Kelly ‘22 and Kyle Mora ‘22 signed up for their first Chicago Marathon (26.2 miles) in hopes of successfully completing it. The marathon was held on Oct. 10 and had around 40,000 participants. Every mile there was a checkpoint that allowed runners to refuel on electrolyte water or bananas. The route led the runners through 29 Chicago neighborhoods, including Boystown, the United Center, and Guaranteed Rate Field, Mora said.

“I thought [running in the marathon] would be a really cool thing to do and I really wanted to run at least one in my life, so I thought ‘why not now?’,” Kelly said. “And I did it.”

Kelly finished in 4 hours and 18 minutes and Mora was not far behind at 4 hours and 43 minutes, after running through a leg cramp. The boys started to seriously train in August using the Nike Marathon Plan, which started preparing them 18 weeks prior to the race, Mora said. Kelly would routinely run in a straight line all the way to the Palos steps and back, giving him 20 miles of training. Each week from August to early October, they increased their running mileage from 12, to 15, to 18, to 22, then back down to a consistent 14 for the last couple of weeks. This allowed them to maintain their stamina throughout the actual race.

“We were running at about a 9 minute 30 second pace for each mile, but on the 20th mile, I got a cramp that persisted for the last six miles, which slowed me down,” Mora said.

In order to run in the marathon, each participant has to either be chosen in the raffle (started in January 2021) and pay $250 or run for a charity after raising a specific amount of money for the foundation, Mora said. While Kelly was chosen for the raffle, Mora was not. He collaborated with the “Run For Autism” foundation and successfully secured a spot to run after raising $1,250 for the charity.

Luckily, both boys secured a spot and were encouraged by all of the supporters that came to see the big race.

“My advice would be to write something on your chest or shirt to give something people can cheer for,” Kelly said. “Kyle and I found it was super fun when people would be cheering for us, and you were able to quickly connect with strangers in the crowd.”

Although it was a fairly clear day for running, the humidity tracker was shown in the “red,” or dangerous zone multiple times throughout the marathon, Mora said. Still the boys didn’t let that slow them down.

“A lot of people were really stressed out about the weather because it was way hotter than people thought it was going to be,” Kelly said. “I heard from a bunch of people that have run a bunch of marathons and they said that it was terrible conditions, but I felt like it was mainly the wind that affected me.”

Both boys have competed with LT boys cross country (XC) for the past four years and had to leave the team one week before the marathon, because of the IHSA guidelines prohibiting high school athletes from participating in road races during their sport’s season, Kelly said.

Nutrition wise, the boys didn’t drastically change their diets and instead tried to avoid foods with tons of sugar, Mora said. Kelly fueled up for the race by eating bananas, pizza, chocolate milk and Pad Thai. Although neither of them feel like it took a huge toll on their body, running marathons can increase the risk of injury to muscles, so the boys have been taking it easy the past couple of weeks.

“Right now I don’t plan on [running] any more in the future,” Kelly said. “I think it was one of those bucket list items that you get to do once. I’m still kind of in disbelief that I actually ran it.”