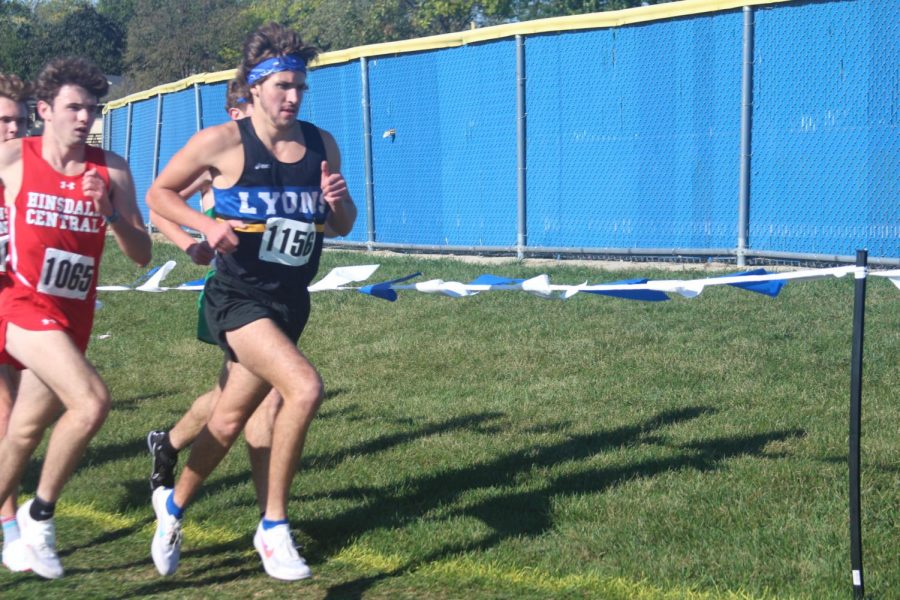 Charlie McLawhorn ’22 has been climbing in the ranks of cross country over the past four years of his involvement. He went from freshman year being not fully committed to the sport to now, an all-state athlete continuing his success into senior year. At last year’s state meet, McLawhorn crossed the finish line beside Jocqael Thorpe ‘21, breaking down in tears together in the realization that they were now all-state athletes.

“It was just something we talked about since the first day of practice, what we wanted to do,” McLawhorn said. “[Everything] coming all together at the end of the year was something really special that I’ll never forget for the rest of my life.”

Running was not always a given for McLawhorn; it took trying out various other sports to realize that running was the one he wanted to take seriously, he said. In fact, it wasn’t until the end of sophomore year when his coach convinced him he could be good enough to go to state, that he started to train harder with the guidance of older teammates, like Owen Hays ‘21.

“Training with [Hays] and then [seeing] all the hard work paid off, and I really got into just grinding it out and seeing how good I could get,” McLawhorn said. “Because of that I’m now [committed to run in] college, and it’s a pretty big accomplishment [that] I thank my teammates and coaches for.”

McLawhorn attributes a lot of his success to the support of his teammates. Likewise, teammate and friend Finn Gallagher ’22 emphasized McLawhorn’s leadership with younger athletes, which benefits the team.

“He motivates everyone and gets them ready and focused on the race,” Gallagher said. “That’s probably the biggest instance of leadership, being there for the team, but also just on regular runs [he’ll] check out the younger guys and see how they’re doing. So he’s really selfless in that way, really wants to help everyone out.”

Head boys cross country coach Michael Danner highlighted McLawhorn’s consistency in training and racing as his greatest asset to the team. Danner is also hopeful that McLawhorn will be able to lead the team to a top five finish in this year’s state meet.

McLawhorn has seen success as the cross country season comes to a close with a fourth place finish at conference and third place at regionals with a time of 15:28 in the 5,000-meter run. He hopes to be in the top five at the state meet, which took place Nov. 6 in Peoria, after the LION newspaper’s print deadline.

“Once I found running, I really got into the grind of it,” McLawhorn said. “Competing against yourself is the main reason why I like it so much. It’s a mental battle, it’s always like, how much do I want it, and I like that personal motivation.”

McLawhorn will continue his running career at Tulane University next fall.