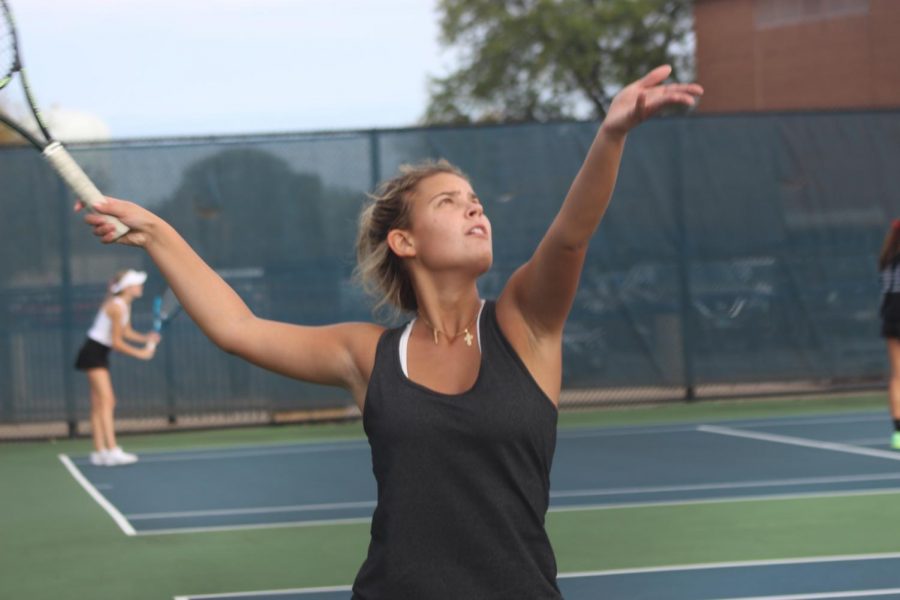 After an unconventional season for girls tennis as a result of COVID-19 last year, the team has returned to a more normal season with two doubles teams placing in the top 40 at state.

Some changes made to increase safety last year prevented certain parts of the sport, such as the state competition and spectators from occurring. Some players such as Anastasia Bozovic ‘22 took a break as a result.

“I did not play last season because I knew that state was not happening,” Bozovic said. “I was just going to take a little break for the year and focus on tennis individually and it really did help me out for this season.”

Players such as Sophie Peto ‘22 were glad to have Bozovic back on the team after her temporary pause.

“It’s definitely great to have a strong player like her back on the team,” Peto said.

Some of the changes experienced by the team last year, however, only increased feelings of togetherness within the current lineup.

“It’s a lot more fun this year, because we can do stuff with the teammates,” Margaret Brejcha ‘22 said. “We [‘ve gone] out to dinner and breakfast.”

In addition to changes related to COVID-19, the team has continued to cope with the loss of coach Bill Wham earlier this year.

“We always try to honor Wham as much as we can,” Bozovic said. “Individually, he was such a big influence in my life. He was an awesome coach [and] a nice person. Whenever we go out to play, we go out to play for Wham.”

Some players felt off entering the state series without coach Wham—someone who had taught them invaluable life and tennis skills, Bozovic said.

“He always came and helped the varsity girls for sectionals and state,” Peto said. “It’s definitely a little weird without him this year, because the last two years we had him prepping us for state.”

In place of Wham, coach David Robare has helped the team prepare for their matches at state, which took place on Oct. 21.

After playing at various tournaments, consisting of quads (a style of tournament in which four separate teams play against each other) throughout the season, the team ended up placing second at sectionals and yielding two doubles teams moving on to state: Bozovic and Mela Zimkus ‘22 as well as Brejcha and Peto.

“I’m kind of just having fun with it,” Bozovic said. “The nerves are still there, obviously, but it’s my last year and I want to finish off strong.”

For the most part, practice leading up to state has remained the same. A few additions to the typical routine include sparring with players from the varsity boys teams and brief individual drills with Coach Robare.

“Robare took each one of us and had a five minute session of hitting balls at us as hard as he [could] at the net and us just trying to volley them back,” Peto said. “It was good to have some individual time with the coach to see what we could work on.”

Despite the individuality of tennis (even in doubles), players such as Bozovic feel the impacts of the game and their coaches’ lessons on a daily basis.

“Playing for a team has given me an idea of how to make friends while playing tennis, because it’s very competitive [and] a lot of people don’t make friends in tennis when playing competitively,” Bozovic said. “I think this teamwork is great for later on in life. It’s great to have that skill.”