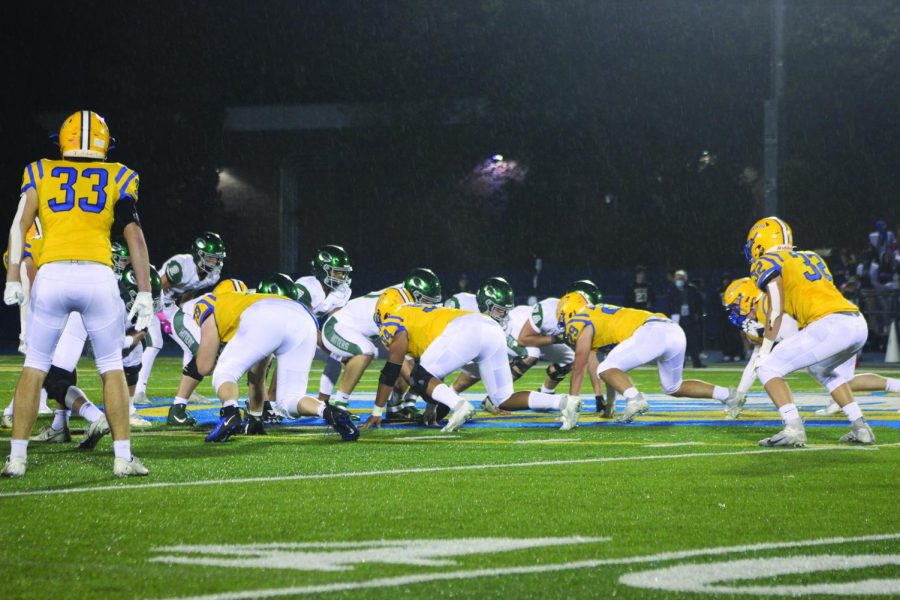 Lyons Township defense lines up against Glenbard West offense prior to the snap in game on Oct. 15 (Burke/LION).

The LT varsity football team lost in their first playoff game on Saturday, Oct.30, against Lockport with a score of 35-10 and closed out the 2021 season.

Before going into the last regular season game against Downers Grove North (DGN) on Oct. 22, head varsity coach Jon Beutjer had confidence in the team to pull off a win and send them into the playoffs.

“Right now, we are just focusing on one game at a time, and we are trying to get better each week,” Beutjer said before the last regular season game. “We are just trying to peak at the right time.”

An ultimate conference win against Downers Grove North with a final score of 21-14, ensured the team would continue their postseason into playoffs for the first time since 2017.

“Being a captain means being a leader who sets an example, not only on the field, but off of it,” Cherry said.

The best game of the season was unanimously the home game on Sept. 17 against Oak Park River Forest (OPRF).The Lions won with a score of 35-13.

“My favorite moment from this year has to be beating OPRF,” Antonetti said. “It was a really big game for us, and it was also a rain delay game, so it was a really cool win.”

Even with last year’s season being moved to the spring due to COVID-19 and games being cancelled, the team has continued to stay committed to the program.

“The kids come every day and they give great effort,” Beutjer said. “They have a great attitude and they are playing for each other.”

The 2021 fall season has been competitive with a regular season record of 5-4.

“It means so much to our program and school,” Tobin said. “It was a win or go home situation, and the emotion after the game was unlike anything else.”

With the 2021 season coming to a close, the seniors are hoping to continue their relationships with each other, even after the playoffs.

“My closest friends are people on this team,” Tobin said. “I know that I will forever be friends with my teammates now.”

The team has grown from teammates into family members throughout the long season, Cherry said.

Many seniors are planning on continuing football into their college experience, including Tobin, Antonetti, and Cherry.

“I’m not sure of where I will be playing next year, but I am keeping all of my options open to see where my best fit will be,” Antonetti said.

Senior members have a lot of fun memories from the season. The morning practices from 5:30 a.m. to 6 a.m. were some of the best times, Cherry said.

“[I will miss] My teammates and coaches,” Tobin said. “I’ve grown up with the guys I’m playing with and have spent almost every day for years working with the same guys and coaches.”