Izzy Lee to play at University of Illinois, Eleanor Musgrove to play at Air Force Academy 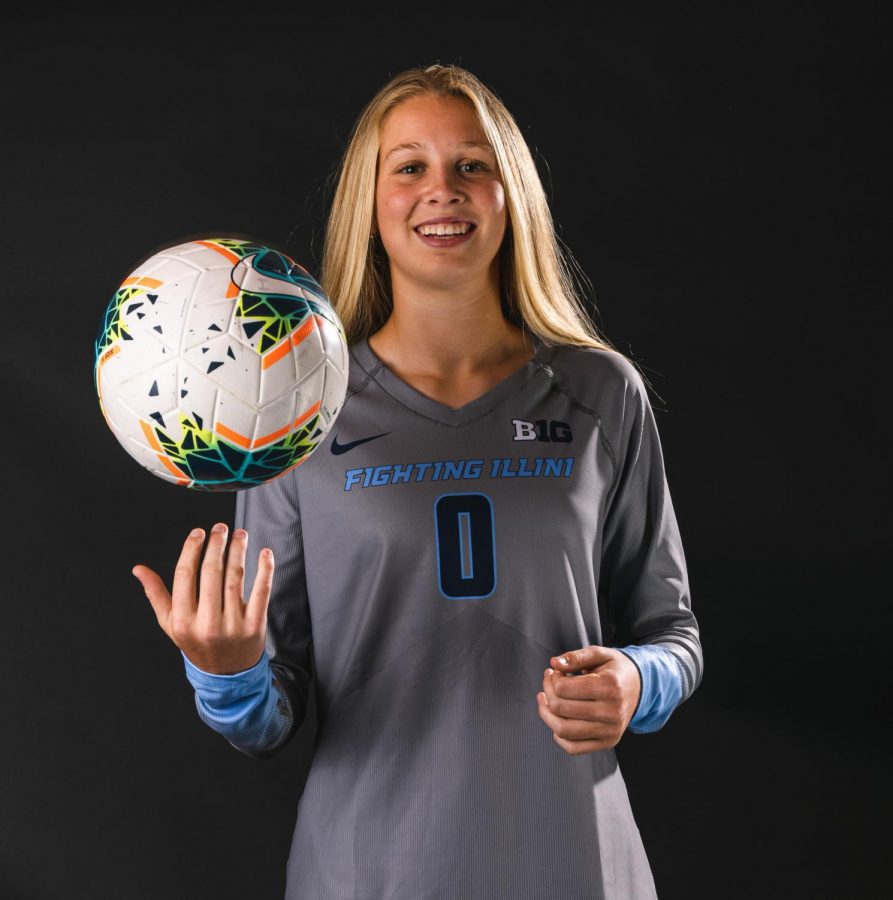 After winning the state semifinal game in June 2021, Izzy Lee ‘22 was told by her coach that a scout from University of Illinois was there watching to recruit her. Post-game, she talked on the phone with them and later received an offer to play Division 1 soccer as a goalie on their women’s team during an official visit in August.

“I was really excited [to receive an offer] because every one of my family has gone there and it’s the school I wanted to go to,” Lee said.

Lee has played with Lyons Township Soccer Club since she was 8 and recently transferred to Eclipse Soccer Club to finish her club career. In addition to soccer, Lee also played basketball and didn’t decide to play soccer in college until about eight months ago.

“The whole high school team last season solidified the fact that I want to play in college because it was kind of how I think a college team would be like, how close we all were,” Lee said. “I think the whole team and [William Lanspeary] and [Andy Newcomb] were really helpful in [making that decision].”

Lee let up only four goals the entire season as the team’s goalie, which varsity girls soccer coach Lanspeary attributes to her ability to read the game, positioning, good hands, quick reaction times, and height.

“Izzy was really tested in a couple of the playoff games,” Lanspeary said. “Our defense held strong in the regular season, so she didn’t have too many games where she was tested, but in the playoffs she came up huge and just made some unbelievable saves for us.”

Another athlete on the girls varsity team is Eleanor Musgrove ‘22, who recently committed to the Air Force Academy to play center-midfield on their women’s soccer team, attend college, and train to serve in the Air Force. Although Musgrove had received offers from other schools, a roster spot at Dartmouth College among them, attending the Air Force was something she had already been considering.

“I’m fourth generation military, so my dad, my grandpa, and then my grandpa’s dad were all in the military,” Musgrove said. “It’s something that I’ve always been interested in, and it just had a lot of opportunities for me that I didn’t see at other schools.”

Along with soccer, Musgrove has been a part of the swim and dive team throughout high school. She played on the girls varsity soccer team starting her sophomore year, but was able to get some experience training on varsity her freshman year as well.

“Eleanor is an unbelievable overall athlete with the other sports that she plays as well,” Lanspeary said. “As a junior she was stronger and more confident, you could just see a bit of a different player from previous years. She’s a very intelligent player and reads the game really well. She’s just as good at attacking for herself as she is setting up her teammates for opportunities as well.”

Lee and Musgrove are looking to finish their high school careers with another great season, hoping to win the state championship game this year.

As well as being teammates, they have also been life-long friends who grew up across the street from each other and have been inseparable since they were little, Musgrove said.

“I don’t even think of [Izzy] as a friend, we’re like sisters,” Musgrove said. “When she committed to Illinois, it meant a lot to me because we’ve been so close for so long. We’ve both wanted this, so it’s kind of emotional. I love her and I love playing soccer with her, so to see both of our dreams come true is really great.”