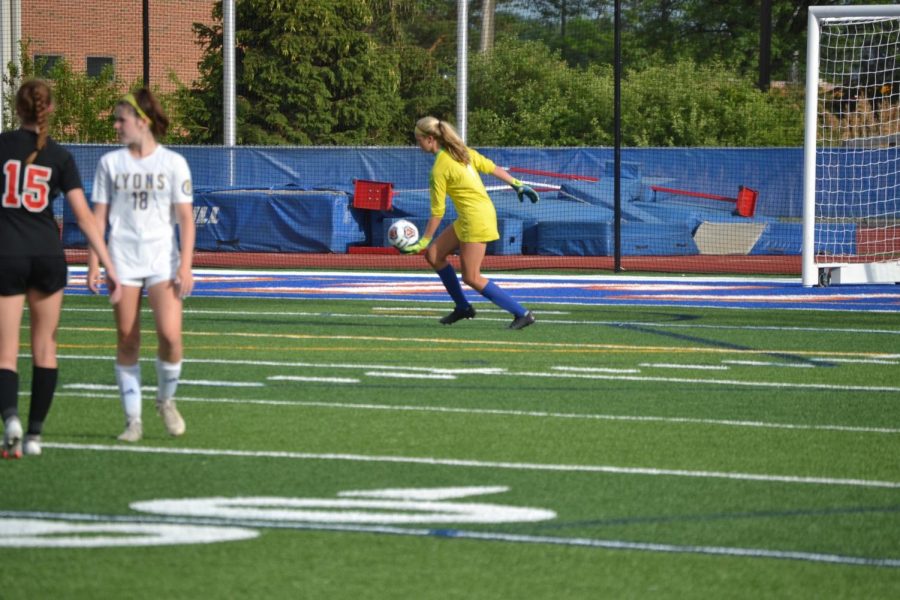 Without having a season in 2020 due to COVID-19, and with the restrictions still present this past school year, the girls varsity soccer team wasn’t sure how much they’d actually be able to play, head varsity coach William Lanspeary said.

“At the beginning of the season we were very worried about getting shut down,” Lanspeary said. “We didn’t know whether the IHSA playoffs would actually happen.”

After tryouts, the coaches knew that they had a pretty good team, Lanspeary said. However, they could not have imagined eventually walking into the IHSA state championship completely undefeated and with only three goals scored on them throughout the entire season.

“We knew we had a good team but weren’t sure if everything would come together after not having a season last year,” Reese Komsthoeft ‘21 said. “But after our first couple games, we knew we wanted to go far.”

In the state semi-finals, the team beat Barrington High School, which advanced to the finals on June 19. They lost 2-1 against O’ Fallon High School, placing second in state.

“The feeling after both games was sort of surreal,” Lanspeary said. “After the last game, there was a brief moment of disappointment, but that quickly turned into a great celebration. The best part was seeing the players run over to the incredible fans that were cheering just as loudly for them in defeat as they had in victory the day before.”

With huge crowds during the playoff games (held at Hoffman Estates High School), the girls felt overwhelming support, Komsthoeft said. The fans also helped add to the intensity which made the girls even more excited.

“I’ve never been so proud and excited for this team,” Jordan Lee-Carracci ‘21 said. “All of the hard work and passion we had put in paid off.”

Most of the girls already knew each other from previous seasons and club soccer, Lee-Carracci said. Practicing with their club teams and utilizing Zoom meetings were ways the team was able to stay connected, Komsthoeft said.

Even through all of their success, the girls encountered many sexist comments about their team on the Instagram account, @lthsgirlssoccer.

“One more thing that I’m very proud of this team for is how they handled themselves through that situation,” Lanspeary said. “The hope is that we can use the situation as a springboard for some positive change at LT, and I think we’ve already seen some of that happening.”

This season, the girls made it further than ever before whilst forming stronger bonds with their teammates in the process, Komsthoeft said.

“[The girls] struck a great balance of working hard and having fun while doing so,” Lanspeary said. “This was such a great group and we’re going to miss the seniors tremendously. They provided so much to this team and the girls soccer program not just in their play on the field, but with their leadership and the wonderful people that they are.”