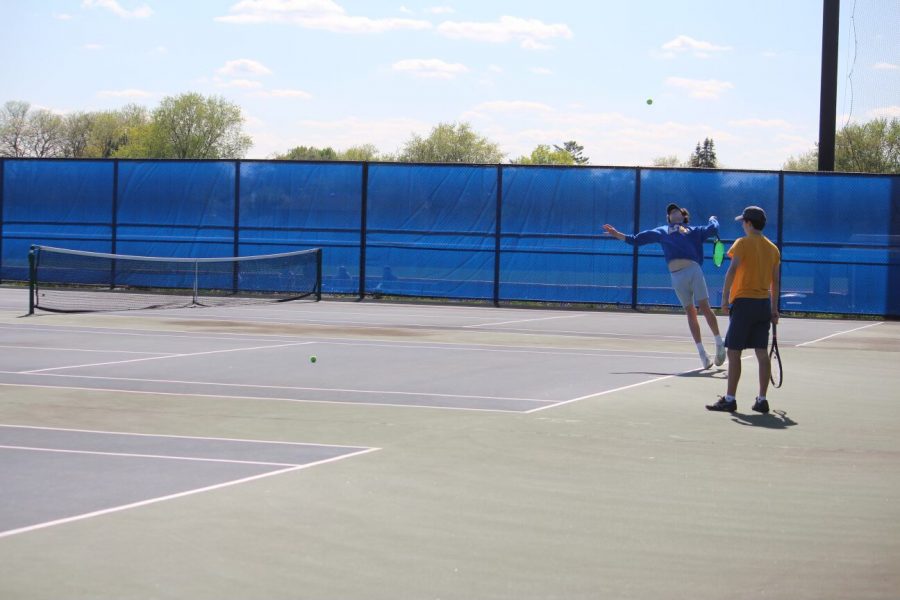 With the cancellation of the 2020 season due to COVID-19, both players and coaches are excited to be back on the court, head boys varsity coach David Robare said. The season started April 5 and will end June 12.

Robare is stepping up as head coach from his previous position as JV and Assistant Varsity Coach for boys and head varsity coach of the girls tennis team. He will fill the shoes of previous head coach Bill Wham, who had been coaching the team for more than 30 years.

“Most of the team is already familiar with [Robare],” 2019 All-State returner Owen O’Connor ‘21 said. “We are excited to get the chance to work with him.”

Tennis is considered a lower risk sport, according to the Illinois High School Association’s website. While tournaments and competitions will look different this year—with no teams outside of LT’s conference allowed to compete with LT—everyone is hoping for a close-to-normal season, Robare said. Both single and double matches will be allowed.  LT will play each West Suburban Conference team twice, once at home and once away and will then go onto the sectional tournament on June 4, 5, 11, and 12 where they will be able to qualify for the state tournament on June 10-12.

“The inclusion of a state tournament was great news,” Robare said. “That will certainly give us additional motivation to strive towards a strong finish at the end of the season.”

Robare is looking forward to seeing varsity players excel in competition, as well as seeing player advances on the freshman and sophomore teams in order to have long-term success. However, one competition that everyone was anticipating is the match against Hinsdale Central, he said.  LT faced Hinsdale Central on April 20 and May 13.

“I think it goes without saying that Hinsdale Central is always a great rival to play against,” Robare said. “We are fortunate enough to have other strong conference opponents on our schedule.”

Hinsdale Central will be one of the hardest conference challenges for the team as well as qualifying and preparing for the state tournament, O’Connor said. Because the team is hoping to have a complete season, they will prioritize their health and safety through measures such as hand sanitizer stations, constant equipment cleaning and wearing masks whenever they are mandatory.

“Tennis is lucky in the sense that social distancing is already somewhat built in,” Robare said.

The team also will follow all COVID-19 protocols, including distancing players. As long as everyone follows the safety protocols, the team can focus on improving their game and competing at their best, Robare said. Even with the new safety modifications, the team is happy to have a season at all after a cancelled season last year.

“I am most looking forward to just being back with the team and being there to watch everyone play and support them throughout the season,” O’Connor said. “I also look forward to trying to make a deep run in the state tournament.”

The team is hoping to have multiple qualifiers in the state tournament including Dominic Cuchan ‘21 who is projected to be a top contender for the state title this year, Robare said.  The season is dependent on in-conference matches due to the lack of weekend invitationals and non-conference opponents.  But with more students going in-person for classes and more teams practicing, the team hopes to have a normal feel to this season, Robare said.

“Playing team sports and spending time with friends and teammates is a small step back towards normalcy,” Robare said. “To be a part of that and allow our athletes the chance to compete for their school is incredibly important to me”.

The team is excited and ready to succeed this season, O’Connor said. The team plays next in the WSC tournament hosted by Proviso West from May 27-28.