Athlete of the Month: Ben Taylor ’21 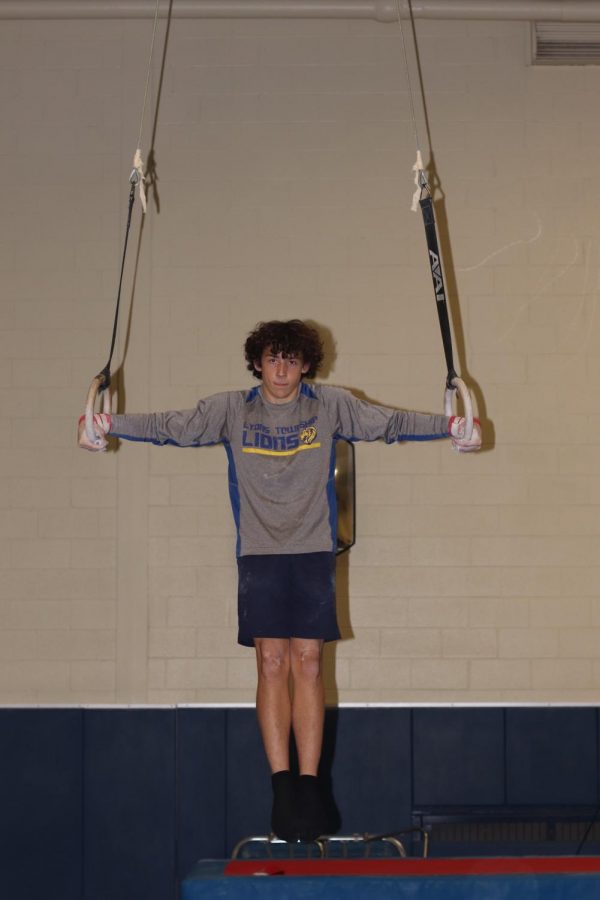 At the end of his sophomore year, Ben Taylor ‘21 eagerly stood at the end of the parallel bars, listening to the cheers of his varsity teammates and coaches behind him. With a running jump off the springboard, Taylor performed a series of techniques like the Kip, Peach Glide and L-Sit. His near-perfect routine earned him a mark of 9.4/10 and individual qualification for the IHSA State finals, Taylor said.

“It was the best routine I had ever done; I stuck the dismount and maintained the best form,” Taylor said. “I remember turning around, hearing everyone cheering for me. I got out of the event and saw my coaches and teammates just so excited for me. It was such a cool moment.”

Taylor began gymnastics at 8 years old when his mom enrolled him in classes at Premier Gymnastics Academy, he said. He joined their club team a year later and participated with them up until this past November. Since freshman year, Taylor has been a member of the LT boys gymnastics varsity team as well.

“Ben was definitely a varsity caliber athlete the day he joined the team,” LT varsity head coach Sam Zeman said. “He’s very smart, disciplined, highly organized within himself and is respectful, helpful and supportive to others.”

As a club member, Taylor gained experience in all six events for boys gymnastics (floor, pommel horse, rings, vault, parallel bars and high bar), he said. During the high school season, he usually competes in the All-Around—an event that features all six individual events.

“One thing that’s really cool, relative to being on a high school team, is acting almost like an unofficial coach,” Taylor said. “I can help my teammates out with their new skills through demonstrations.”

Taylor is easily the one person the team relies on, varsity teammate Conor Cahill ‘21 said. He’s able to explain the maneuvers of new, complicated skills and is patient with other teammates during practices.

“Ben is really kind of the heart and soul of our team,” Cahill said. “He’s the one always leading conditioning after practice, he’s the one leading warm-ups. He really just pushes everybody to get better. And he just continues to get better and better each year too.”

The past spring season was disappointing as his season was cut short and the team was unable to compete for state, Taylor said. This year, the team still won’t have nearly as many meets as a regular season, given IHSA guidelines. But, over the fall and winter, Taylor and his teammates were able to meet for a few practices and contact days, in the fall, he said. As of press time, the season is set to start March 15 and will include at least five meets.

While the length of the season may not be ideal, Zeman and other LT coaches have begun discussing a plan to pursue an IHSA state series in a safe and responsible manner, he said. With all the time and effort his athletes have put in over the past year, Zeman wants to give them as normal of a season as possible.

“It’ll be a little bit intense when we start up again because we won’t have as much time to craft and perfect everything,” Taylor said. “But if everyone’s working hard and staying on task, I’m extremely hopeful. It’s my last year, so hopefully we’re able to have some type of season.”

Taylor still plans on continuing gymnastics—at least as a hobby—after high school ends, he said. While a college intramural team may not be the same as the NCAA, Taylor would be grateful for any opportunity to maintain his acrobatic skills.

“All I really need is a trampoline,” Taylor said. “Whenever I have access to one, I’ll definitely make sure to make good use of [it].”

Taylor will miss the environment he has built and shared with his teammates, he said. By being part of the high school team, he has come to appreciate gymnastics as less of an individual sport and more of a team sport.

“These are the people that I’ve been training with, working out with—people I really care a lot about,” Taylor said. “Just being with this group of people helped me understand what it means to work towards some goal, not just for yourself, but a group as a whole.”