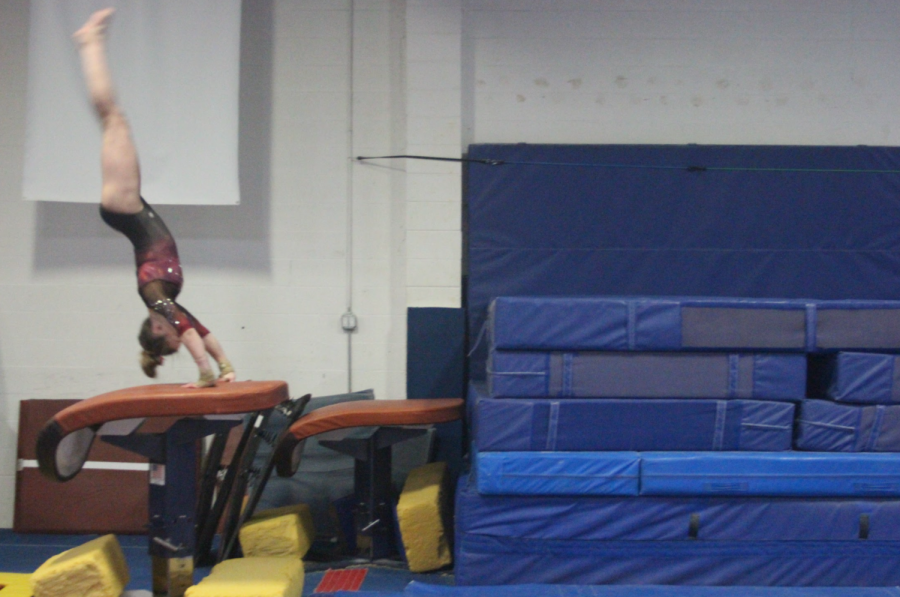 “When Kaitlyn first arrived, she probably didn’t know how good she was at the time,” Reid said. “Outside of her natural talent, Kaitlyn is just super determined; she never lets up or settles. She goes above and beyond by going to trainers and continuously working on nutrition.”

Grimes, a four-time national qualifier of the Women’s Junior Olympics National Championships, verbally committed to Ohio State University her sophomore year. She credits the team atmosphere, coaching staff and academics as her top factors leading to the decision, Grimes said. The recruitment process, which began her freshman year, included visits to Kaitlyn’s practices and official meets to gauge her competitiveness and coachability, Grimes said. The two most important meets for her recruitment were Nationals of 2018, where she scored an all-around point total of 37.025 and Nationals of 2019, where she scored a 9.875 on vault. Her 2019 performance ranked her the 10th best in the country.

“Before important meets, my teammates and I like to get ready together,” Grimes said. “We’ll do our hair and makeup and listen to music to get us ready. A lot of our motivation comes from each other—we really pump each other up. I also try to stay calm and just think about how what I did in practice is basically the same thing I’ll be doing at the meet.”

During the meets, Grimes competes in each of the four events: the uneven bars, vaults, balance beams and floor, she said. As she continues onto college, she will have to earn herself a spot on the individual event, meaning she may specialize in one or two of the four events.

“It really just depends on how you are leading up to a meet [in college],” Grimes said. “I’m hoping I can compete in all four [events] in college, but either way, I’m just going to be happy to compete.”

Despite cementing herself as one of the best high school gymnasts in the country, Grimes’ arduous five-day-a-week practice schedule and the overall commitment that year-round club gymnastics demands left her at times doubting her ability to make it to the next level, she said. Sitting down and having one-on-one conversations with her coach were incredibly important during those times, helping her to redirect her focus and confidence, she said. Grimes said that  even with the commitment, she has still been able to enjoy her high school experience to the fullest.

“The club’s schedule made it really difficult for me to get involved with [LT Gymnastics],” Grimes said. “But I think that being a part of this team and being friends with all these girls from other schools has been awesome, and I’m very thankful for it.”

Grimes’ teammates share her appreciation towards the overall comradery the club has built. This year, they voted her as team captain, Reid said. BIG Gymnastics teammate Lincoln-Way East senior Olivia Bowsman, a Towson University commit, has known Grimes for the past five years and has thoroughly enjoyed watching her grow as a competitor and friend, she said.

“[Kaitlyn] has always wanted the best for her teammates and been super supportive,” Bowsman said. “I know she is the type of person that I can come to if I need help with anything, she’s always the person I go to. Over the course of a year and a half, we became super close, and she’s my best friend.”