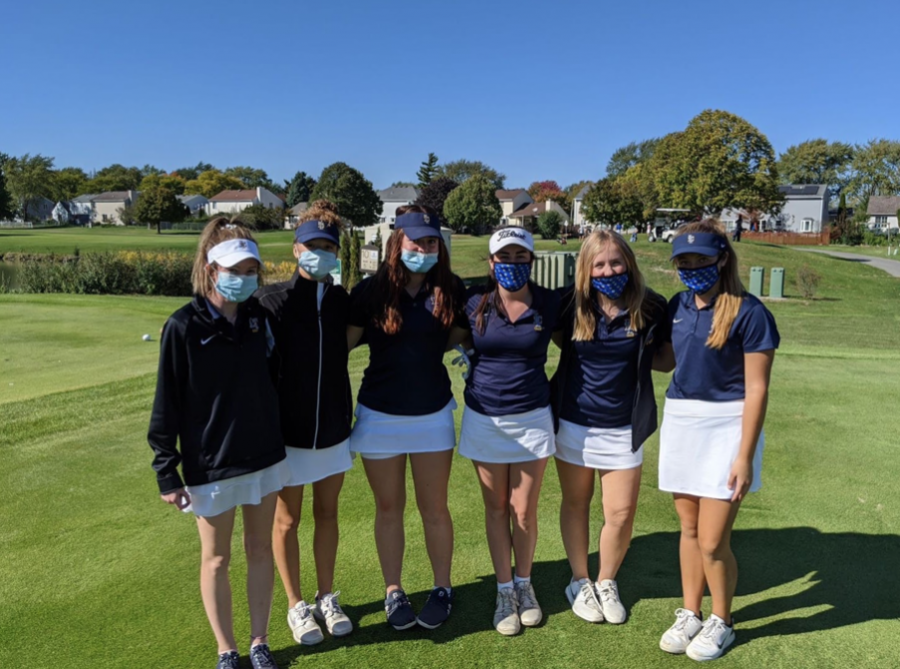 Despite the uncertainty of a varsity girl’s golf season amidst COVID-19, the athletes maintained motivation and worked hard throughout the season to improve. The team completed the season with a tie for third in their post-season conference and a strong fourth place finish in a challenging regional competition, varsity Coach Jeff Johnson said. Sylvia Kozub ‘22 also advanced to Sectionals.

The greatest challenge of the season was that the team was playing in a more competitive conference, Johnson said. During their regular season conference match, they finished in fifth place out of six teams; however, Johnson expressed hope for their regional competition as the teams in the conference were pretty evenly matched, he said.

“There’s always a chance,” Johnson said before they played in the regional match. “I mean, it will be tough; it’s a very good regional—they readjusted for [COVID-19]—[so] only two teams come out of regionals instead of three, [which] really reduces the odds for everyone in there, but I think we have a chance.”

COVID-19 guidelines and precautions did not affect the team too much, as they already played mostly distanced; however, they had to wear masks and refrain from sharing equipment, Johnson said.

For varsity player Chloe Blauw ‘22, the greatest challenge of COVID-19 was forming a connection with the JV players, as they were unable to have pasta parties or any sort of team bonding activities outside of practice.

“[Pasta parties] are our main way of having contact with the JV team, so it’s harder for us to talk with [them] because during practices we’re split up,” Blauw said during the season. “So it’s been a lot harder to come as close.”

Isabella Strauss ‘21 was the only senior on the team this year, and over the four years she has played golf at LT, she has gotten close with many of the girls on the team, she said.

“I’ve known most of the girls on varsity for a couple of years at least, and I try to be like an older sister to them,” Strauss said. “Not only with golf, but in general [I try] to be a role model and lead by example.”

Last year, Strauss and her sister had organized group t-shirts for the team, with a saying and their names on the back so they could match and have something to remember their season. She decided to do the same this year and organized an order of t-shirts which the team appreciated, Blauw said.

“Especially for this year, I think it was really important because everything is different with [COVID-19], and I thought that it would be memorable to have,” Strauss said. “And now we have little matching t-shirts, which I think is so cute and such a good thing to have as a memory.”

Towards the end of their season, both Blauw and Strauss expressed gratitude for the chance to compete and were proud of the performance of their team as a whole. Johnson also thought they had played well with the added challenge of a more difficult conference this year.

“We’ve had some good rounds, played some good matches, had some good individual scores,” Johnson said. “I think the most important thing is that the girls have had fun. They’ve enjoyed their opportunity to get together, to be allowed to compete in a sport.”