Swimmers express gratitude, excitement for opportunity to swim amidst pandemic 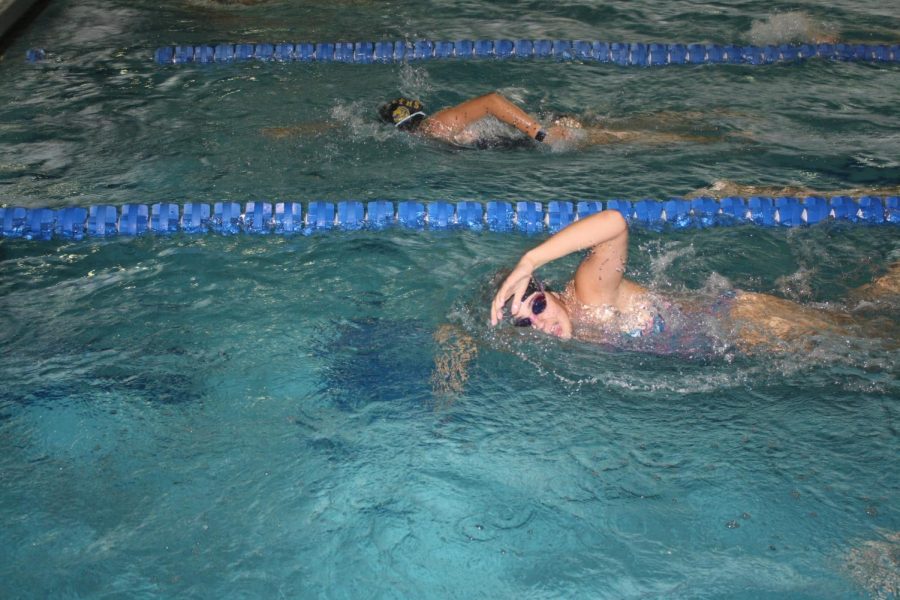 Swimmer Margaret Meehan ‘21 checked her phone after her club swim practice with some of her other teammates and was excited to see that Illinois High School Association (IHSA) had cleared Girls Swim and Dive for a fall season. After accepting that it would be canceled, the news was a very special thing to hear, Meehan said. The announcement came out from the IHSA’s Board of Directors on July 29 and outlined precautions and new season dates for all high school sports.

“It’s going to be really important to keep our attitude positive because we could easily turn this season into a pity party,” Meehan said. “But I think we just really have to be grateful for this opportunity that we have.”

The team began training Aug. 17 and has gone from 11 practices per week to only six in order to stay safe and keep the athletes’ immune systems strong, Maura Ferguson ‘21 said. They have also had to split up varsity and JV into different pods, each training at a different campus and not interacting with each other, Ferguson said.

“It’s a bit hard to keep the team motivated just because we feel a bit [detached],” Ferguson said. “But other than that I think we’re doing the best that we can, and I’m really excited for the rest of this year.”

Several other factors have also contributed to making this season more difficult than past ones. Primarily, many of the athletes were not able to train as much over the summer as they usually would due to COVID-19 restrictions, Meehan said. The team is also having to rebuild itself after the graduation of many talented seniors and state champion Callahan Dunn ‘20, Meehan said.

“We did lose a lot of seniors,” Ferguson said. “But I think one thing that we’re really trying to do is keep morale high and encourage the underclassman to step up a bit because I think that that’s really important.”

For girls swim coach Scott Walker, this year has introduced many new challenges that he has not seen during his 34 years of coaching. With no current plans for a regional, sectional or state meet, it’s hard to keep the team motivated, Walker said. The team is able to have dual meets with a few schools, but only a limited number of athletes are allowed to participate, which has made it frustrating, Walker said.

“I’ve had to step back several times and remind myself to take a deep breath and just to try to keep an open-minded approach,” Walker said. “In a way, that’s not a negative thing, it’s a perfect excuse to think outside of the box and have the opportunity to see if something different works for training.”

Some of the new protocols the athletes have to follow include wearing masks at all times when they are not in the pool, limiting the number of swimmers in each lane at a time and no longer using the locker rooms to change, Ferguson said.

However, with all of the setbacks and challenges, the athletes are still managing to keep a positive attitude and be grateful for the opportunity they have to swim, Meehan said.

“I just want to represent my school the best I can, but I also just want to be grateful for this opportunity to swim,” Meehan said. “A lot of states don’t have this and a lot of sports were unfortunately canceled or pushed back.”