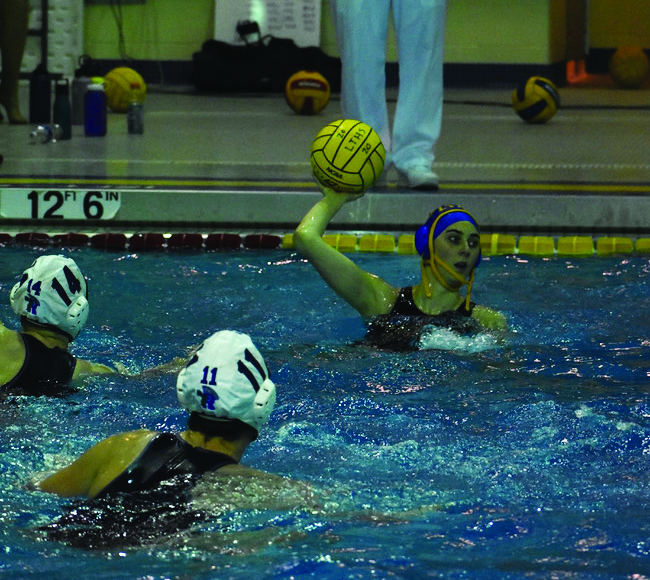 Without a pool to train in or her teammates to count on, Abby Guerra ‘21, along with many other LT girls water polo players, persists through the disappointment of a season suspension and the isolation of quarantine by getting into an at-home workout routine. Guerra and her coaches hope this will keep the team’s skills in-tact during the COVID-19 crisis, she said.

“The plan is to keep the athletes up with their workouts so, if water polo resumes, they will be ready for action,” varsity head coach Megan Jacobs said. “They have cardio, ab, and other strength sets given to them to keep them working out and in shape during the break. I also send out water polo skill videos for the girls to watch, and answer [their] questions [about the skills].”

With the coronavirus becoming more and more of a prevalent issue, countless sports seasons have been put in jeopardy. The least athletes can do is continue their training in whatever way possible, which is exactly what Jacobs and JV and assistant coaches are encouraging their players to do, they said. The coaches also had five-time Olympic water polo players Tony Azevedo run a 30-minute, water polo specific team workout via Zoom.

“Our coaches have been telling us to hold ourselves accountable,” Guerra said. “They email us about three to five times per week with videos, so we essentially get ‘homework.’ It’s important to be taught and be able to see techniques – that’s something we can’t do [by ourselves]. If we do come back, we’re just going to hop back into it. I think our coaches expect that [of us].”

Guerra hopes to be recruited for college water polo, which motivates her even more to continue working on her strength and skills, she said.

“Personally, since I know what I need to do to strengthen for water polo, I have been doing some lifting and running, or I hop on the stationary bike,” Guerra said. “Sometimes I even go outside and I pass [the ball against] the wall of a church near my house.”

The news of suspension and possible cancellation was especially difficult for seniors including Abigail Cabrera ‘20 to take in, as this is their last chance to play alongside their teammates, Cabrera said.

“I feel really bummed out because it is my last time playing with all my teammates, and since I’m not pursuing water polo in college I wanted this season to be memorable,” Cabrera said. “Now that [the season] is suspended, we feel a little overwhelmed which is why we are motivating our teammates to try and do workouts on their own so once the suspension is over we can resume right where we left off.”

Depending on when training can resume, IHSA has discussed the possibility of extending the season in order for competitions to still take place, Jacobs said. This possibility promises success for the girls, as coaches and the team expect to go far this year.

“I believe that we will be doing great things this year,” Cabrera said. “We have a great coaching staff and we all push ourselves 100% during practices, with absolutely no excuses [for slacking off].”

Both Cabrera and Guerra remark on the potential their team has this year. The players are more driven than ever and, this being Jacobs’ first year as the varsity head coach, they have been pushed hard at practices and now in remote training, they said.

“[Jacobs] has taken it upon herself to be a great head coach,” Guerra said. “She came in with a plan and I really respect that—we need a coach that’s going to hold us accountable and go hard on us. It’s that whole idea of holding ourselves accountable that’s going to make me and the whole team do better.”

With this drive for success, the girls can only hope for the chance to get back to the pool as soon as possible and pick up right where they left off, Guerra said.