Girls track starts the season off on the right foot 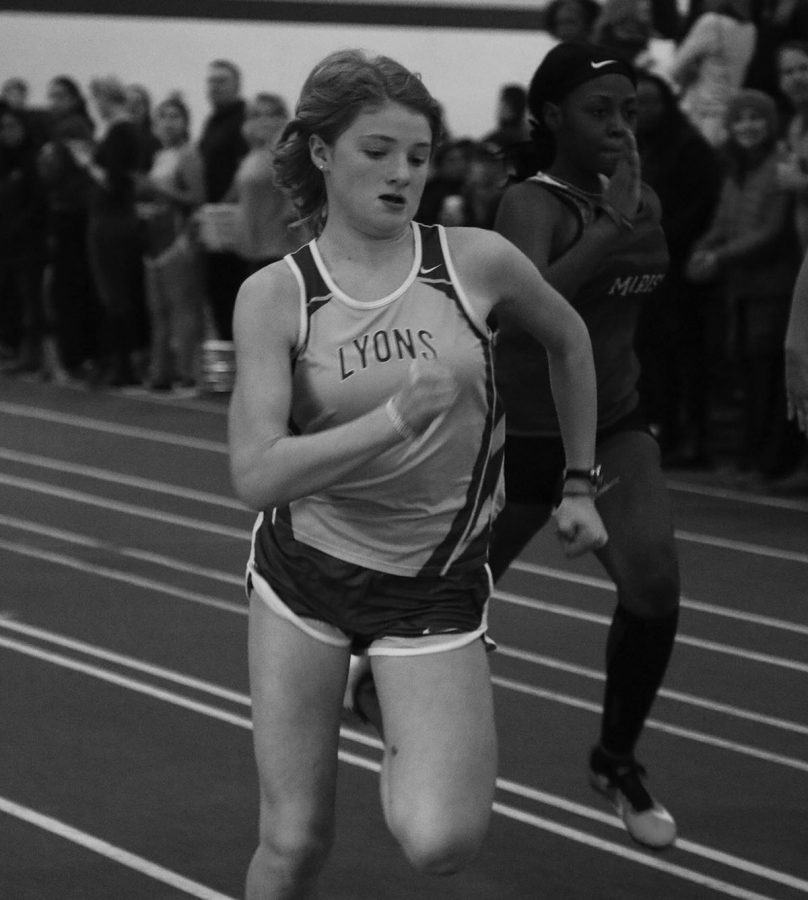 Caroline Vear '22 sprints during a race in the SC fieldhouse (Buckendahl/TAB).

Girls track started off the season by taking first place in the quad-meet held on Feb. 15. The win was shared by both the varsity and frosh/soph teams against Marist, Lake Park and Lake Zurich in the SC Fieldhouse.

“The first meet is mainly to see how everyone performs,” sprinter Lillie George ‘21 said. “It is about getting everyone into the flow of things and [to learn] how meets work.”

There is less pressure to be at your best at the first few meets, George said. However, there is still evaluation occurring from the coaches about who will be the leaders on the team.

“March marks the start of invitation season, but right now the goal is to see who is capable of running at the higher level—who drives the team,” George said.

With that being said, there is a lot that goes into being a key player in track and field.

“[The leaders are] the people who are always putting in 100 percent effort and always doing the practices,” George said. “They put their best effort into all parts of the workout.”

Giving all you got is just half the battle, George said. There is a lot more to it than just being able to run fast for long periods of time.

“There’s the physical demand of training, but there’s also a heavy cognitive and emotional cost to getting better,” assistant varsity coach Alexander Lyons said. “The girls have to study racing tactics, learn how to read sensory data in a race and how to [compete] across different race distances.”

The cognitive abilities needed to excel at the sport span farther than just being able to analyze the race and using the techniques runners have been taught. There is a level of emotional maturity needed to keep trying, even after failure.

“[There is a] vital, but underrated quality in great athletes: they are willing to have their hearts broken,” Lyons said. “I think it takes a lot of courage to go after a big goal that you may or may not accomplish. When you want something really bad, and you invest a lot of yourself in it, it’s painful when it doesn’t work out. There’s no guarantee that you’re going to achieve what you want, but [they] take the leap anyway.”

With a strong start like that, it’s possible girls track and field will make it to state again this season. However, no one can predict this early, but the team has high hopes.

“There isn’t really a strategy to make the state meet,” Lyons said. “The athletes just concentrate on preparing well and learning from week to week. That’s what occupies our attention at practice.”

What makes the outlook for this season so promising is the respect the runners have for each other and the friendships they have built.

“I really respect the kids on the team,” Lyons said. “They work hard and have discipline and all that cliche sports stuff, but they also are just really tuned into each other, and to themselves. They take really good care of one another, particularly in stressful moments of competition.”

Girls track has their next meet on March 3 in the SC fieldhouse at 5 p.m..