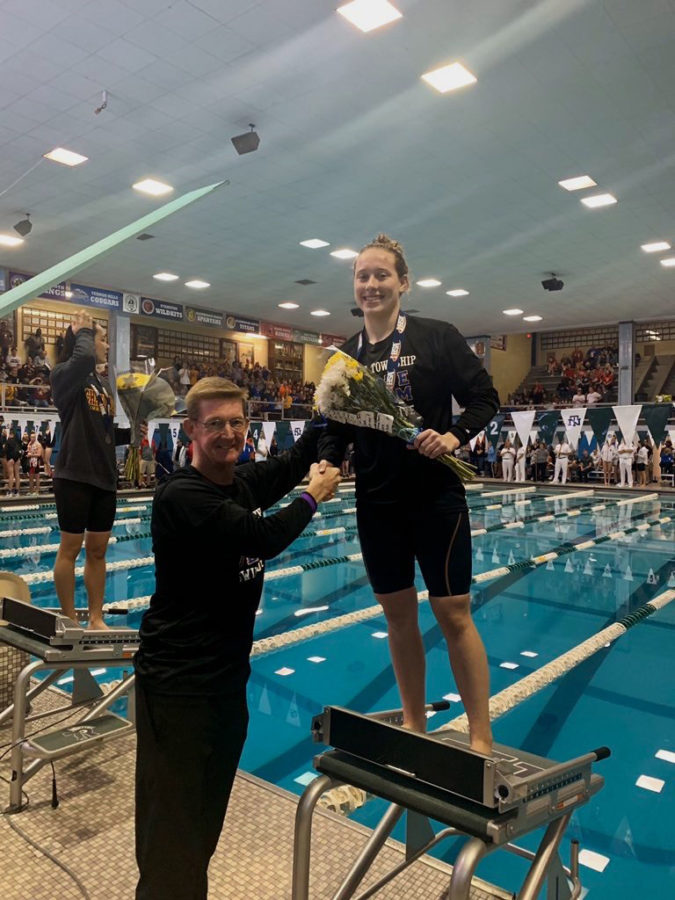 After Callahan Dunn ‘20 gazed at the scoreboard at the end of her 200 Individual Medley race and saw the number one next to her name, she was instantly filled with joy. It all hit her when she looked over at her team and coaches who were smiling and cheering enthusiastically, celebrating her once-in-a-lifetime success.

“It’s so special to share it with all of them,” Dunn said. “My teammates and coaches all [contributed] to that swim and that state title because they are the ones who pushed me to get [there] and be the best that I can be.”

“To say I’m grateful, proud and happy for the entire team is an understatement,” Walker said.

Although this was Walker’s first year coaching Dunn on the girls team, he has always kept an eye on the progress of the girls program while coaching the boys, he said.

“From an outside [view] and from being on the guys team, [Dunn] just basically has never wavered from her goals and she allowed accepted time to be part of the process of gaining experience and [continued to train],” Walker said. “The older she got, the more experience [she got] and all the pieces just fell into place for her, which could not have happened to a more deserving young girl.”

Even before she began swimming at LT, Dunn had been working for this title, she said. The ups and downs of training and the team culture made her stronger this season and greatly influenced her performance.

“This season I was much more positive and overall happier,” Dunn said. “As a senior, I just wanted to enjoy my time on the team, and I wish I had that mindset earlier.”

Walker also saw this shift in mentality when she won her title, he said.

“I just felt that she finally had fun with the swim instead of dealing with all the pressure,” Walker said. “From the very beginning of the season I just wanted her to have fun and [enjoy her] last year because she truly carried the program for the last four years.”

Dunn’s state-champion title aside, she could not have attained so much success without the help of her teammates, she said.

“I’m proud of all my teammates because every single girl played a role to score that high at state this year,” Dunn said.