Athlete of the Year: Grant Leader ’19 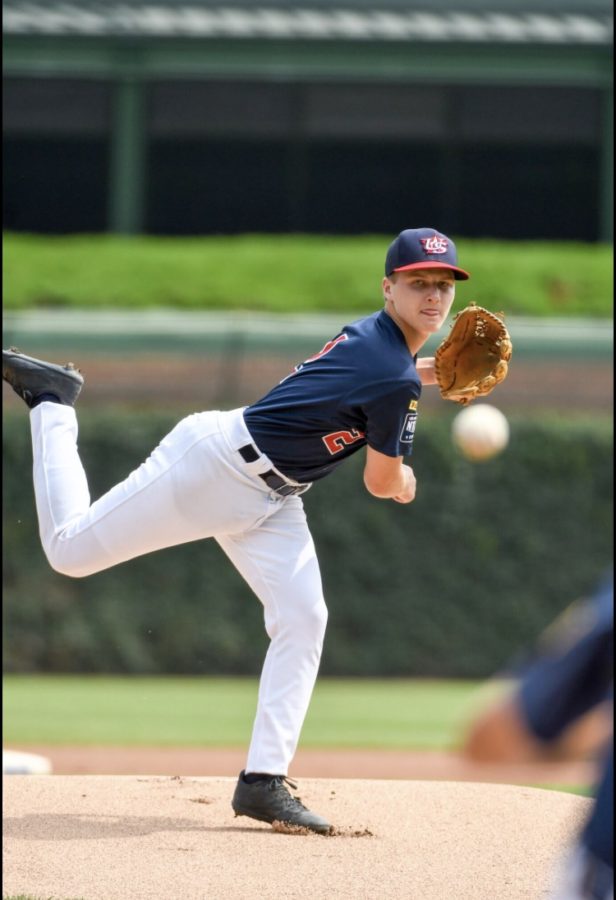 Leader pitches in a game (Photo courtesy of Grant Leader).

Every four years, the world pauses and comes together to cheer on their country in the Olympic games, and like clockwork, every four years thousands and thousands of youth athletes see the Olympians wearing their country’s flag and think to themselves ‘I want to do that.’ The sad part is, not many of these kids ever got to experience that dream of competing for your country, for the pride of your nation.

Grant Leader ‘19 however, got to experience that feeling in the summer of 2017 when he was one of the just 40 kids who were chosen to compete on the National Team Development Program, or NTDP. The program allowed for the top youth baseball players in the nation to form into two teams and compete against each other, while wearing the same uniforms that the United States national team wear.

“Playing with USA baseball—that feeling of wearing your country across your chest and hat—is the coolest thing ever,” Leader said.

Playing for NTDP is just one of many of Leader’s accomplishments over the past four years. Since his freshman year he has been named to central region All American First Team, was named to 2017 area code underclass team, an honor that is hand selected by major league scouts, and was a preseason All-American honorable mention freshman through senior year by Perfect Game USA, he said.

Nearly two years later, Leader is still impressing many with his pitching skills, which include a 92 miles-per-hour fastball, and his leadership on the LT baseball team. The team’s record is currently 22-6 heading into the postseason, and is highlighted by the three headed pitching attack from Leader, Eric Steensma ‘19 and Michael Walsh ‘19, who have all been longtime teammates and witnessed Leader’s leadership skills firsthand.

“He’s just about the best teammate anybody could ask for,” Walsh said. “He’s a great leader, he’s always there for his teammates and supporting his other pitchers. There’s no other guy I would have by my side pitching in high school with than Grant.”

Part of Leader’s key to success is his focus, Walsh said. That focus could be seen when in 2018, in a series against OPRF to clinch the West Suburban Conference Silver title, Leader pitched for six and two-quarter innings and didn’t walk a single batter, Matt Piento ‘18 said. While he had to step out due to a high pitch count, the no hitter was clinched in the last two outs by Piento.

“It was the last game of the series, and we were looking for a sweep,” Piento said. “This game meant a lot because it helped clinch the conference title my senior year.

While his baseball abilities are phenomenal, someone who just met him would never know. Leader is a very soft spoken individual who tries his best to be a good role model as an upperclassmen, Leader said.

“When he is in the classroom or at practice, he’s this nice, soft spoken, humble guy, as well as a great friend and is always there for everybody,” Walsh said. “When he gets on the mound his mindset completely changes, he has the bulldog mentality and can’t wait to strike out the guy opposing him.”

Striking out batters is where Leader excels; so far he has 52 K’s on the season as well as posting a 2.2 ERA while also notching two wins this season, according to MaxPreps.com.

Leader started playing on varsity for LT at the end of his freshman year, when he was moved up to the varsity squad for the postseason. Leader also plays for Top Tier Baseball, his travel team, but it doesn’t quite compare to playing for your school.

“There is something different about playing for your school and representing them,” Leader said. “I’ve played with all the seniors at LT since I was about 10 years old, and we have more chemistry than any other team I’ve played on.”

Leader is going to pitch at University of Illinois for the next four years; he made this decision his sophomore year, before many of his peers had even thought about college. Reasons for choosing U of I are the schools strong academic tradition and a great coaching staff. The decision for him came between U of I and University of Michigan, however remaining close to home so his family could watch him was one of the biggest factors, Leader said.

“My grandpa comes to all of my games both; the travel games and all the LT games he can,” Leader said. “My parents have been super supportive, paying for me to go to tournaments, paying for equipment, traveling-they have been awesome and I am super grateful for them.”

With LT baseball starting the postseason at the Mt. Carmel regionals, the team is trying to carry on and finish strong on a long season that has included multiple cancellations due to rain and other factors out of the team’s control. However, Leader is doing his best to keep everyone’s heads up.

“I need to help keep the team’s attitude up, we are going to have rain, games are going to get cancelled and that can be hard but help keep our noses to the grindstone at practice,” Leader said.