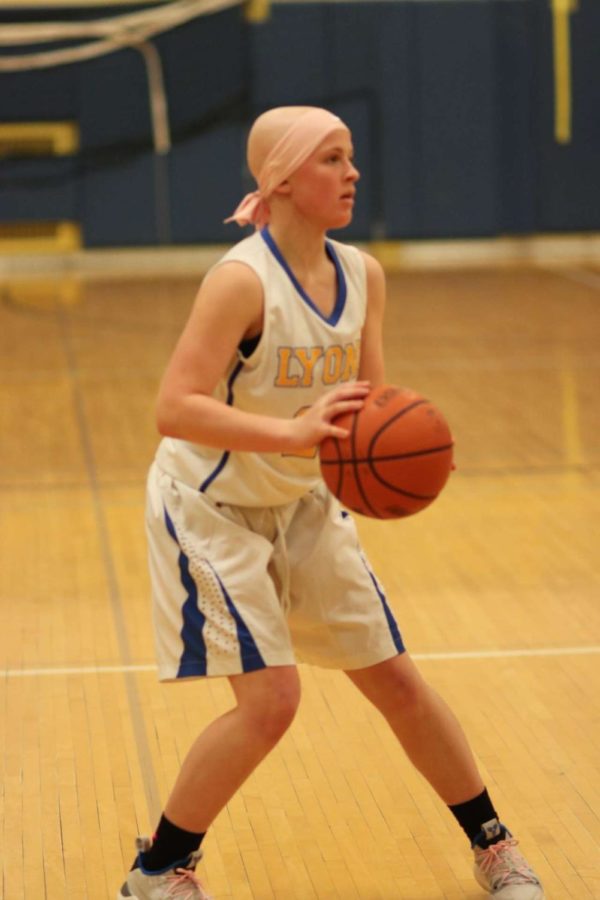 Despite being diagnosed with Hodgkin's Lymphoma, Allie Kuhlman '22 continues to play basketball for LT. (Photo provided by Megan Guzlas)

Allie Kuhlman ‘22 had just her finished basketball game last December, when she noticed she had lost feeling in her left arm, and it had turned blue.

Her family immediately rushed her to the ER, where many tests were done. She soon found out that a tumor was pressing on her vein, cutting off circulation in her arm. Eventually, Kuhlman was diagnosed with Hodgkin’s lymphoma on Dec. 8; however, this did not stop her from playing basketball.

“[Basketball] always gives me something to look forward to and being able to play shows that cancer is not stopping me from doing anything,” Kuhlman said.

Kuhlman was diagnosed with stage two Hodgkin’s lymphoma, located in two places. The cancer is between her heart and lungs, and stretches into part of her neck. A few days after her diagnosis, doctors installed an access port under the skin to inject chemicals, used in chemotherapy, into her body, without going through an IV.

She is currently undergoing chemotherapy in four 21 day cycles. Despite the frequent chemotherapy, she still manages to attend as much basketball and school as possible.

“[Allie] is a strong, positive leader,” head freshman basketball coach Morgan Gallagher said. “Even with her diagnosis and all of the treatments and doctor visits, she works her butt off to make sure she attends as many practices and games as possible.”

Many times Kuhlman comes to basketball after a long day of chemo, Gallagher said.

“Her determination and positive attitude have rubbed off not only on her teammates but on myself as well,” Gallagher said. “I have even told Allie, I now strive to be a more optimistic person because of her. She is truly remarkable.”

Since Kuhlman diagnosis, the team has been very supportive of her, Gallagher said. They have set up fundraisers to raise money for her battle, including the Pink Out game on Jan. 19, and a bake sale. The girls show support each game by wearing green bracelets on their ankles and wrote Kuhlman’s initials and number on their shoes.

“As a team, we check up on her and stay positive,” team member Anna Bryant ‘22 said. “We don’t act different around her because she is the same person she was before her diagnosis.”

The oncology team at Lurie Children’s Hospital is confident in curing Kuhlman, her father Eric Kuhlman said. The family has bought into the team’s confidence and remains optimistic throughout her treatment.

“The best way to describe since she has been diagnosed is like a roller coaster, especially through the more challenging times,” her father said. “We see how her love for not only basketball, but her team too motivates her and we couldn’t be happier that she has a positive distraction to keep a positive framework during these challenging times.”