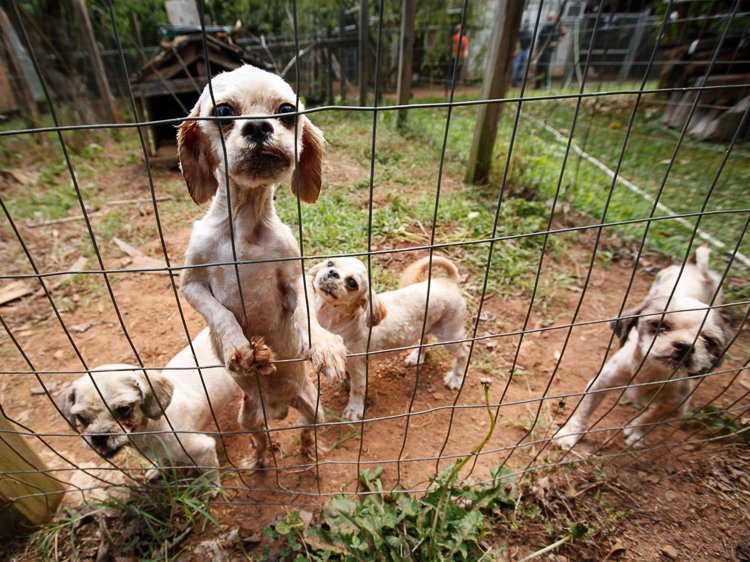 Behind every wide-eyed, tongue-lolling, tail-wagging puppy you see through the glass of a local shelter or dog store there is a story. For the 2.11 million dogs sold from puppy mills each year, that story is one of mistreatment, malnutrition and commercial motivation.

There are over 400 breeds of dogs worldwide. Many popular breeds such as retrievers, pointers, terriers and toys have been bred for specific traits that make them desirable on the market. Size, color, type of fur and demeanor are just some attributes that almost all prospective dog owners search for when trying to find the “perfect” pet.

While there are dog breeders who run ethical and compliant practices to provide consumers with specific breeds, the dog breeding business as a whole has become lucrative and unreliable, as many breeders take advantage of the animals who cannot defend and speak up for themselves.

This is where we see the problem with puppy mills.

Puppy mills are dog breeding operations whose main goal is to churn out as many dogs as they can. In doing so, they often disregard hereditary health problems that are common to many breeds and provide their dogs with absolutely subpar living conditions. They put profit and consumerism well above the quality of life of their dogs.

Dogs in puppy mills are treated like machines, not living organisms. According to the American Society for the Prevention of Cruelty to Animals (ASPCA), female dog begins to produce pups at the earliest possible age and after she has her first litter, she is forced directly into producing another one. After the mother is completely physically depleted or otherwise unable to produce another litter, she is killed. Any of her pups who exhibit noticeable physical disabilities or flaws are also killed.

The pups who do survive are raised in small cages without adequate food, veterinary attention or socialization with other dogs. Many have genetic and internal problems.

Since breeders in puppy mills are only concerned with the number and physical traits of their puppys, they quite often fail to check the dogs they are breeding for internal or hereditary disorders. The ASPCA noted that the failure to provide their paternal dogs with veterinary examinations means that diseases like epilepsy, heart disease, diabetes and other musculoskeletal disorders get passed down from litter to litter. The inadequate conditions that the dogs are raised in also mean that many puppy mill dogs contract avoidable diseases like pneumonia, heartworm and giardia before they even arrive at pet stores.

These diseases can remain unnoticed until the dog is already adopted. Puppy mills concern themselves with producing physically attractive dogs, not internally healthy ones. They will profit off of selling dogs while the new owners will flounder in unexpected veterinary bills.

Right now,  21 states have no laws that regulate commercial dog breeders and many states only require breeders to meet the United States Department of Agriculture’s low standards.

Naperville  has recently proposed a ban on pet shops that sell anything other than rescue animals. The city council has tabled the discussion, but I believe this is a discussion that all cities, not just Naperville, should be having.

Consumers speak with their dollars.

If we choose to research further into the dogs that we are adopting, and make the conscious choice to not support puppy mills, they will have no money to continue their corrupt, abusive business.

Man’s best friend deserves more than cramped spaces and malnutrition. We as consumers have the power to give them the life they deserve.