‘The Half of It’ Review 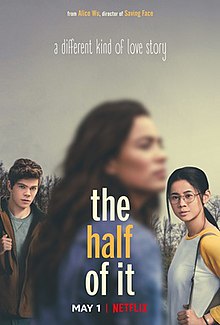 “The Half of It” is a cute, coming-of-age movie that doesn’t feature a straight white girl as the main character. Instead, it follows Ellie Chu, a girl who owns an essay-writing business, and Paul, a somewhat dim-witted boy who is hopelessly in love with the most popular girl in school, Aster. In an effort to win her affection, he approaches Ellie, hoping that she can help him write the perfect love letter. The only problem? Ellie Chu has a crush on the same girl.

What helps this Netflix teen romance rise above its peers is that it is realistic. It confronts the problems and racism that many immigrants have to face in America. Religion is also a major aspect of the movie. Almost everyone goes to church in their small town and it is a semi-frequent topic of discussion. While I had not been expecting this, I found that it helped to further paint a picture of small-town America.

As you get deeper into the film, the film further explores the characters and their relationships. Even if love does take center stage, the friendship between Paul and Ellie became my favorite part of the movie. The only thing these two characters really have in common is that they have a crush on the same girl (even if Paul is cluelessly unaware of this). Paul is a hopeless romantic, and Ellie is a cynic. Paul’s passions include perfecting his taco sausage, and Ellie’s passion is words. Their contrasting personalities create a friendship that is all the more raw. It’s a friendship you’ll end up rooting for more than the romantic relationship.

However, the romantic relationship that forms cannot be ignored. Ellie and Aster form a bond through late-night texts and exchanged letters. The intimacy of their words drives their relationship forward without any physical interaction. I really appreciated how the movie not only told a love story but made love a topic of discussion. The film explores what love is and what it means to be in love. The best part was that it never gave a concrete answer, leaving the viewer to come up with their own conclusions about the ambiguity of love.

While this movie is by no means a cinematic masterpiece, it is above the typical teen romance. I would definitely recommend it if that’s the genre you’re looking for.