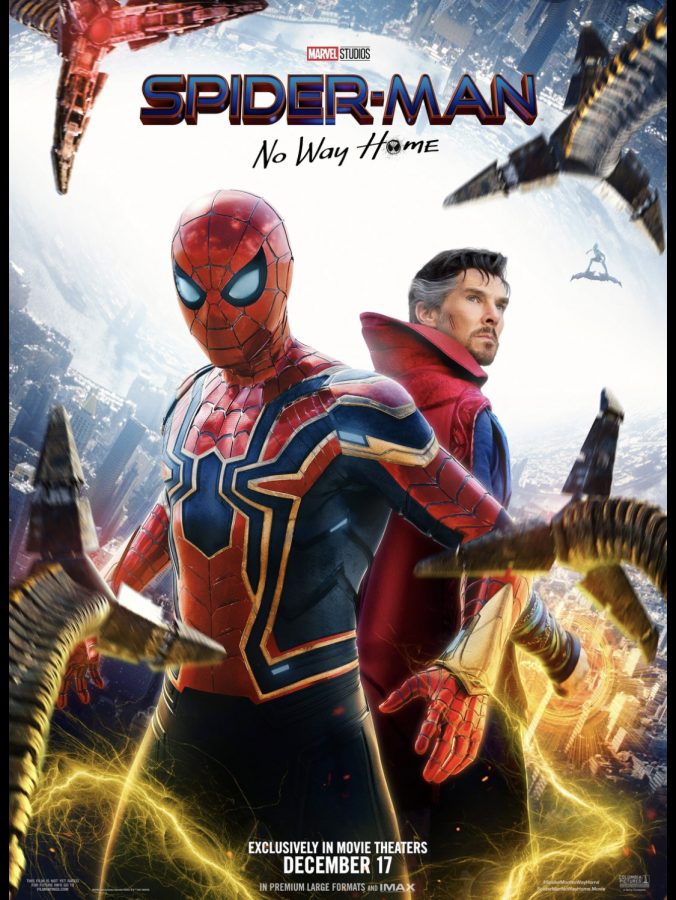 “Spider-Man: No Way Home” was released across theaters in the U.S. on Dec. 17, 2021. As of Dec. 21, 2021, this movie has had the second biggest box office weekend debut in Hollywood history, subsequent to “Avengers: Endgame,” with $260 million in revenue. Worldwide, it has grossed $600.8 million, making it the third largest debut ever, following  “Avengers: Endgame” and “Avengers: Infinity War.”

This movie is the latest addition to the Marvel Cinematic Universe, and features Tom Holland in his role as Spider-Man. Following popular belief, I think that Holland executes both roles of Spider-Man and Peter Parker perfectly. However, I still can’t decide whether Holland, Andrew Garfield, or Toby Maguire is my favorite portrayal of Spider-Man. In “Spider-Man: No Way Home,” Holland portrays Parker/Spider-Man in his senior year of high school as he tries to juggle college applications while also saving the world.

After months of looking forward to “Spider-Man: No Way Home,” I can say it was worth it. I was nervous that expectations were being set too high, and that I would be disappointed following the movie. However, I can say that my expectations were exceeded. There was a huge shock factor that kept up throughout the duration of the movie and it seemed like they were playing on nostalgia from old movies, to keep everyone immersed. The incorporation of old with new was a huge element in “Spider-Man: No Way Home,” and the producers of this movie did a good job with expanding appeal to multiple audiences.

The only thing that I would say was negative, was that a lot went on during the movie. The plotline moves extraordinarily quickly, so it’s crucial that one pays attention to every minuscule event that occurs. If you leave to get a drink or get some popcorn, I’m 96% sure that you’ll come back and have no idea what’s going on. Personally, I was frustrated with Spider-Man’s/Parker’s decisions throughout the film. All of the conflict that occured could have been avoided if some logic had been written in, but of course, what can you expect from a teenage boy?

I would also recommend watching all of the Spider-Man movies before you go watch this, and maybe some other Marvel movies if you have time. Marvel tends to weave multiple story lines throughout their films. They sneak “Easter eggs” into each movie that you would not catch if you have not viewed earlier films. Everyone should watch this movie, but you will not understand a huge portion of the plot if you go into the theater lacking background knowledge. Without a doubt, it is still a good movie even if you are short on Spider-Man knowledge, but I really advise that you watch the prior movies beforehand in order to have the most worthwhile experience. I am also placing a heavy emphasis on staying after the credits roll; staying the extra 10 minutes is worth your time, I promise.

Overall, “Spider-Man: No Way Home” was an amazing experience. I would definitely go back to watch it for a second time and I don’t even like going to the movie theater. The movie is really worth the price of the ticket, and make sure to have your mask handy since the theater will undoubtedly be crowded.