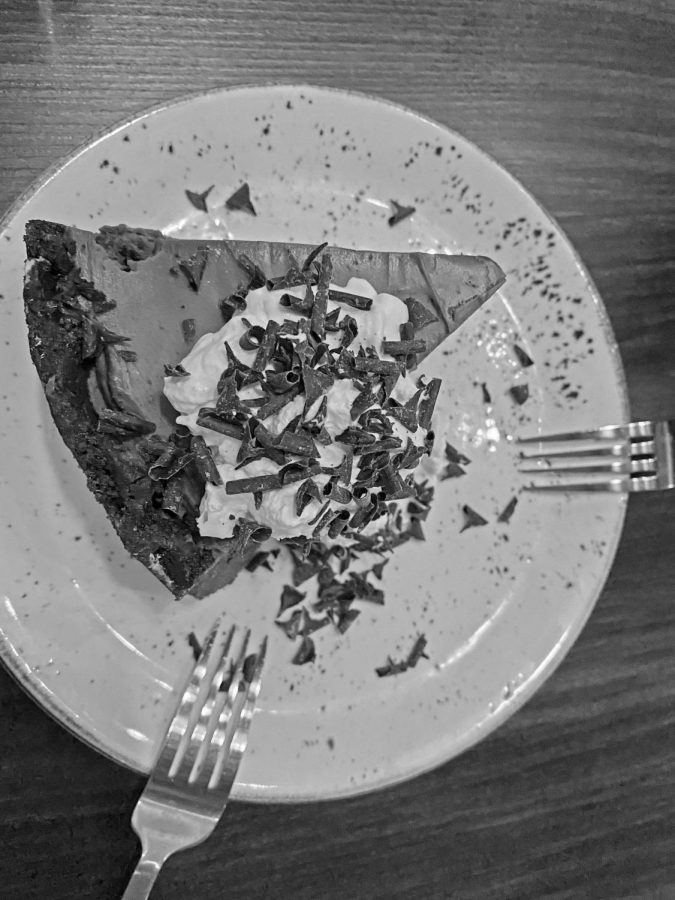 Gelato Pie made out of peanut butter gelato and an oreo crust served at GP Italiano (Race/LION).

When I heard about GP Italiano, the new restaurant in downtown La Grange, I was immediately intrigued. I love Italian food, and am always eager to try a new place to open my horizons.

Upon entering the restaurant, I immediately noticed the romantic lighting and the forest-like canopy of trees hanging overhead. The decorations were tasteful and mystical, lending the place an air of magic.

For my appetizer, I ordered the Meatballs ($13), which also came with grilled bread. I enjoyed the vodka sauce the meatballs came in, which was complemented by the whipped ricotta on top of the meatballs. To be honest, I enjoyed the sauce more than the meatballs themselves, which were pretty standard.

My waiter told me that the wood-burning pizza and handmade pasta were made in-house. After discovering this, I selected the Tortellini ($19) out of the eight total pasta choices on the menu. I adore pasta, so I had incredibly high expectations once I found out it was made in the restaurant. The tortellini was served with oysters, shiitake mushrooms, cremini mushrooms, and browned butter. The usage of oysters intrigued me, as I have not normally had oysters with tortellini. I was immediately impressed with the freshness of the pasta and enjoyed it greatly. At first, I thought the portion size of the tortellini entrée was small. However, upon further examination, I realized the individual tortellini were larger than what I was used to, so the meal was still filling. I greatly enjoyed the mushrooms and the creamy sauce it was served in. I also tried the Burrata Ravioli ($18). I have to say, this ravioli is some of the best I have ever had. The cheese in the ravioli was the perfect texture.

The dessert I selected was the Gelato Pie ($10), which was chocolate peanut butter gelato in an Oreo crust. The slice was large, and the gelato was incredibly rich; if I had ordered it for myself, I would not have been able to finish it. I thought the sweet Oreo crust and the rich gelato meshed together very well. However, the pie itself was a little hard to bite into because of how frozen it was.

Overall, I think GP Italiano is a wonderful addition to downtown La Grange. The food was delicious, and I loved the tortellini. The servers took care of us and brought our food out quickly. If you’re looking to go to a nice restaurant, I would definitely recommend going to this eatery.

GP Italiano is located on 1 South La Grange Road, La Grange, and is open from 4 p.m. to 9 p.m. Tuesday through Thursday and 4 p.m. to 10 p.m. Fridays and Saturdays. Reservations can be booked on the website, Tock app, or by phone.