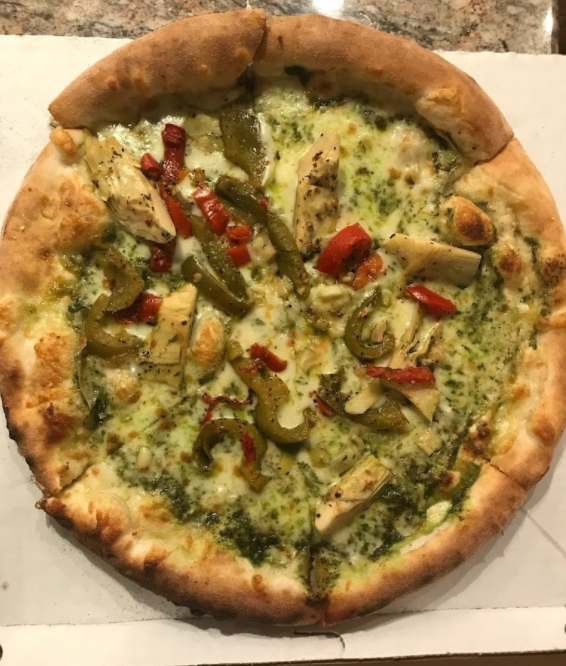 Even with LaGrange’s proximity to the quality pizza places Chicago boasts, we have our fair share of well-loved spots in our own downtown area. With the closure of Fireside pizza, a new establishment, Billy Bricks, has opened.

Billy Bricks offers indoor dining; however, my family enjoys the convenience and safety of delivery on a Friday night, so we decided to try the new restaurant from the comfort of our kitchen. With a large menu consisting of appetizers, pastas, sandwiches, salads, desserts, and of course pizza, there was a lot to choose from, which I appreciated.

For a starter, we tried the bread bites, which came with eight pieces and a marinara sauce ($4). Crispy and buttery, they tasted like a perfectly done pizza crust. They were pretty basic, but done well and at a good price. The marinara sauce was cold, however, and probably would’ve complimented the bites better if it was warm. Nonetheless, a solid choice for bread-lovers and a great price for those not looking to break the bank.

The first pizza I tried was the artichoke pesto with grilled peppers pizza ($15) for a pizza serving one to two people. Being a big pesto lover, and a pretty strong artichoke fan, I had high hopes for this pizza. It was not something I’ve seen before, and as a vegetarian, I was excited to experiment outside of the veggie and cheese pizzas I usually end up with. I was not disappointed. The pesto replaced marinara as the sauce of the pizza and added a pleasant basil flavor to the slice. The cheese on this one and the others was not as melted as it could have been, but that might have been due to getting it delivered instead of eating in the restaurant. However, the flavor and type of cheese were suited well to each pizza, and other than slight texture issues, I had no complaints about it.  Then there was the other star of the pizza: the artichokes. For someone who enjoys artichokes, they complimented the pesto nicely and were a unique addition to what would have otherwise been a slightly boring pizza. My one complaint would be that the artichokes were a bit too large and spread out for my liking, and I didn’t love not being able to get the full artichoke flavor in every bite. Overall, with Billy Bricks’ signature wood-fired crust and standout toppings, this pizza was unique and one I’d definitely have again.

I’m far from a pizza connoisseur, but it’s pretty easy to judge a place by the quality and effort they put into their cheese pizza. Dare I say it actually may be the hardest type to get right because of its simplicity and not being able to mask its blandness with various toppings. Despite going into it ready to criticize, I’m pleased to say Billy Bricks’ “Quattro Formaggi”—four cheeses, for those not fluent in Italian—($15) did not disappoint, and we could taste the thought that went into choosing the ingredients. What I most appreciated was how the four cheeses—mozzarella, parmesan, asiago, and provolone—did not fuse into one flavor, but rather shone through individually in each bite. Again, I have to note to be wary of delivery if you like your cheese more melty because the time it spent in transport messed with the texture a bit and made it less oozy than I would have liked. Overall, though, it is a solid choice for picky and adventurous eaters alike.

Billy Bricks also has a great selection of salads to choose from, all of which could be entrees by themselves or a side to share. I settled on the Arugula salad ($10), which included a base of arugula topped with fresh mozzarella, cherry tomatoes, avocado, pine nuts and a lemon vinaigrette dressing. What first caught my attention when I tasted this salad was how fresh all of the ingredients were. The argula was perfectly crisp and had a nice peppery taste that was balanced well by the smoothness of the mozzarella. The lemon vinaigrette was also superb and added a nice tang to the greens. The only flaw was the price was a bit high for the simplicity and medium size of the salad. But overall, the salad was a win and a perfect side to any pizza or pasta dish.

With the dozens of pizza places in the surrounding area, it’s hard for one to stand out, but I think Billy Bricks has done a great job so far. Their fresh ingredients, expansive menu and unique crust could easily lead to a spot as a local favorite. I would recommend this to those looking for a new pizza place.