The anxiety of being Asian American 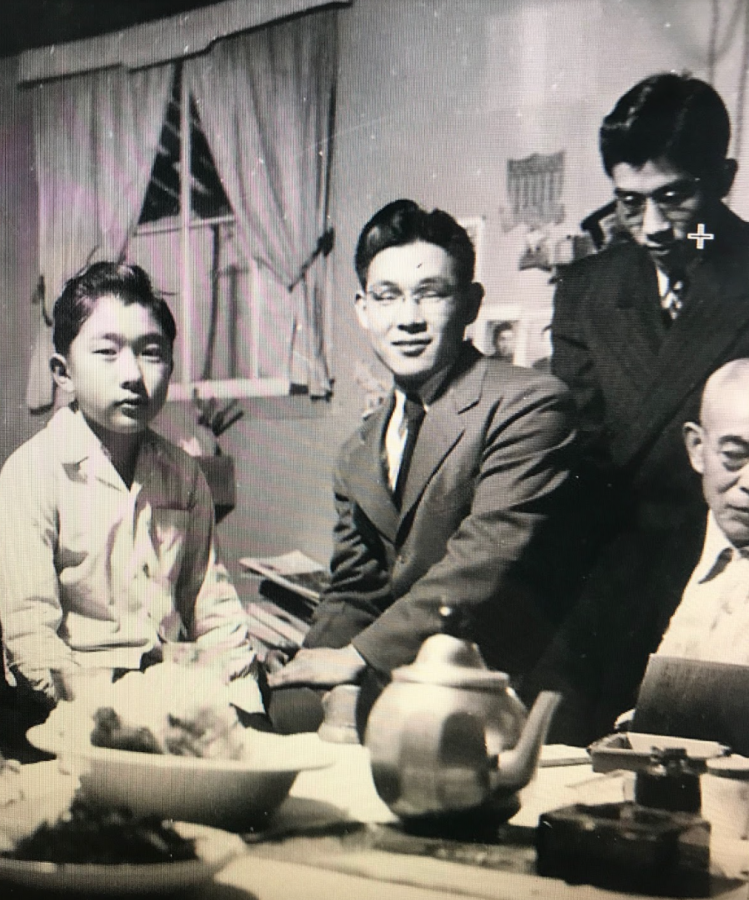 Photo of my Grandpa (furthest left) and his family in the internment camps with a fake wall behind them to imitate a “real house”.

As a half white-half Japanese woman living in America, you learn to ignore the frequent racist slurs whispered behind your back, the stretching of kids’ eyes to mock the distinct almond-eye shape of most Asians, and the constant flow of snarky comments that “weren’t meant to offend you” from everyone around you, even from those you expect to be different.

Out of the hundreds of derogatory sentences I have been told, these are some of the most common: “oh you Asians and your math”, “you’re only smart because you’re Asian”, and “go back to your country”.  What these people don’t understand is that I work on math homework as regularly as any other student, I get good grades because I stay up until three in the morning perfecting every last assignment, and America is my home country.

Phrases such as “chinks” and “japs”, as well as mocking the Asian accent, have been normalized in our culture. Racism against Asians is considered a less serious offense since we are commonly referred to as the “white adjacent”, yet we are still not accepted members to their society. Although I have never been ashamed of my origins, at times I find it hard to accept myself when I feel like such a stray in society. Oftentimes, even people I am closest with are unable to understand my feelings and play them down as if I am overreacting.

For decades, people have used one specific event such as Pearl Harbor or the COVID-19 pandemic to rationalize xenophobia against the entire Asian community. As children, both of my grandparents lived on the West Coast of California. When WWII broke out, Americans were angered by the bombings of Pearl Harbor and took their resentment out on the entire Japanese race. Shortly following the bombings, President Roosevelt announced a new U.S. government policy stating that people of Japanese descent would be interned in isolated camps simply because of their ancestory.

My grandparents and their families lost everything when they were forced to relocate to such camps, even though neither family had any involvement in the Pearl Harbor tragedy.  My grandma’s family was considered “lucky” because they were sponsored by a white family in return for unpaid labor on their farm. For years my grandma and her siblings slept in a chicken coop attempting to make life seem as normal as possible.  During this internment period, my great grandmother passed away due to lack of proper healthcare and birthing complications. After the government released Japanese citizens with little to no compensation for their trauma, my grandma changed her cultured name of “Shisuko” to simply “Barbara” in fear of still being an outcast and not finding a job with a Japanese name. Although I hold much love for this country, it is hard to forgive it for allowing this atrocity to take place.

More recently, the Asian community has been “blacklisted” due to the COVID-19 pandemic.  Some Americans act as if Asians are more likely to spread COVID-19 and blame them for bringing the pandemic to the U.S. Although the disease first took form specifically in China, racist aggressors are unable to distinguish between Asian ethnic groups, making anyone who is or perceived as Asian a possible victim. “STOP AAPI [Asian Americans and Pacific Islanders] HATE”, an incident-reporting center founded by the Asian Pacific Policy and Planning Council, has received more than 1,800 reports of pandemic-fueled harassment or violence in 45 states and Washington D.C. since March 2020, according to Time magazine.  Public outrage over these violent incidents has only grown as videos are tweeted and retweeted all over social media. Thousands of people are taking to the streets to speak out against the anti-Asian sentiment and rally for racial equality.

Even my older sister’s professor asked her if she ate a bat when she told him she got dimsum with her friends the past weekend. It is unsettling that this sentence came from the mouth of someone you are supposed to have a strong and trusting relationship with.

I understand that this is an unprecedented time and that racism against Asians will not disappear all in one day.  However, the community needs to realize that Asian Americans have always been the scapegoat for many of America’s problems and that innocent lives are being cut short simply because of their race.  It is devastating to think that many Asian Americans are terrified of showing their face in public for fear of being brutally attacked.  Do hundreds of people have to be violently attacked or killed for anyone to notice that something is wrong with this country? We are tired of America constantly silencing our voices, and if no one else will stand with us, we will stand alone.