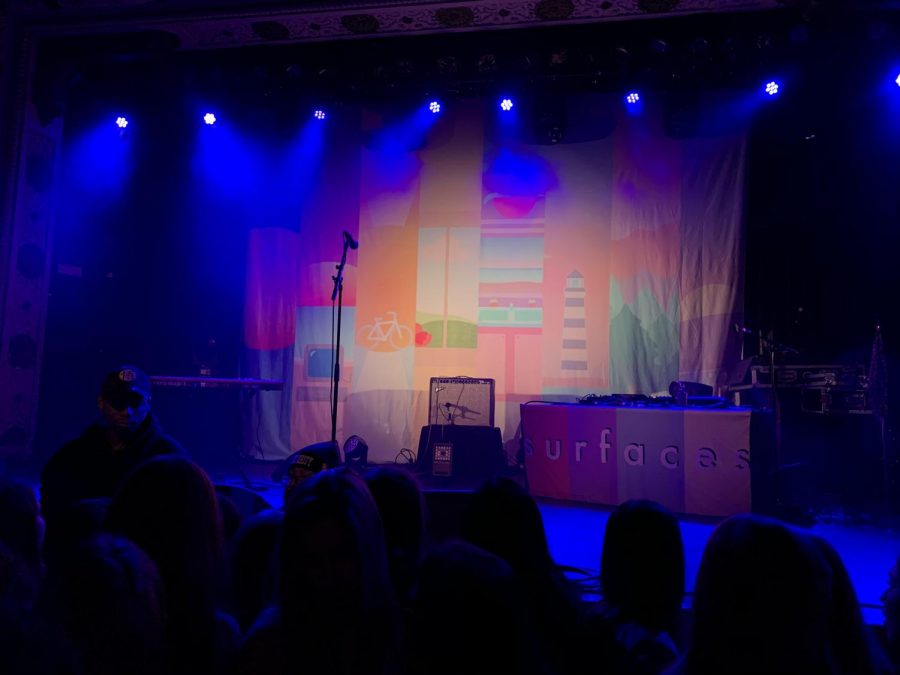 The stage at the Surfaces concert (LION/Williams)

When I arrived at the concert venue on Jan. 10 for Surfaces’ Chicago-stop on their Warm Winter tour, there was still a line wrapped around the Metro. Immediately, I noticed the stage. Its wall was covered with the mellow pastels that Surfaces has branded, and each column scene seemed to embody a different song. I could imagine the way those colors would pulse with the energy of the crowd when band members Forrest Frank and Colin Padlecki stepped onto the stage.

The Texas-based group had secured a strong following in Chicago thanks to their feel-good, melodic style of music that simultaneously acted to hype you up and ease your stress. When the two entered, screams filled the venue and the crowd surged forward like they were under a magnetic pull. It was so sudden and forceful that many in the audience even tripped and fell. After checking to make sure the audience was okay, Frank and Padlecki began the set

The group opened the night with “Loving,” one of their hits from their first album “Surf.” The songs that followed were a mix from “Surf,” their second album “Where the Light is” and singles.

As Frank sang, he jumped and danced around the stage, ensuring that all sides of the audience got a taste of his style. He constantly tried to get the audience involved by prompting arm-waving during slower parts or cohesive jumping at a beat drop. Not that the audience really needed to get more involved; their energy was absolutely invigorating and evoked an almost out-of-body experience as everyone’s screams melded together to the sway of the music.

The group employed Lito Hernandez on saxophone, bringing the set to the next level. While the songs performed by Surfaces were very similar to what you would hear listening to them on Spotify, which the audience expected and appreciated, the robust jazz sound of the saxophone added an element that made the live experience more in-your-face.

Throughout the night, the crowd jostled and danced together. We were compacted to an extent that is only acceptable at concerts. The common passion for this band–strong enough for some audience members to drive five hours for the show–connected the crowd.

Like many artists, Surfaces thought it would be fun to trick the audience. Without having played their most popular song “Sunday Best,” the band gave a thank you to the audience before hastily exiting the stage.

I doubt anyone in the audience believed they had ended; regardless, we all joined forces and chanted the name of the song. With each chant, the volume grew and with each clap, the excitement built up until finally, they bounded back onto the stage. The audience’s cheers meshed, their loud voices resounding off each other so that it sounded more like a high-pitched buzzing. Sensing the energy of the crowd, Frank asked the audience to all take a step back before the band played the unmistakable chords of Sunday Best. He knew the inevitable: the crowd was about to go wild. It was impossible not to with Padlecki ringing a cowbell to the rhythm and Frank’s enthusiasm slipping out with every lyric. The group made the right call to save their best for last; it left the crowd on a high that they could ride on their rainy trip home.

However, there were a few decisions made by Surfaces that were only acceptable given that they do not have much experience with tours. For example, at the end of the concert, Padlecki threw his drumsticks in the audience. While fun and lighthearted in theory, with a rowdy crowd it was not surprising that one girl received an elbow to the face instead of the drumstick she was reaching for.