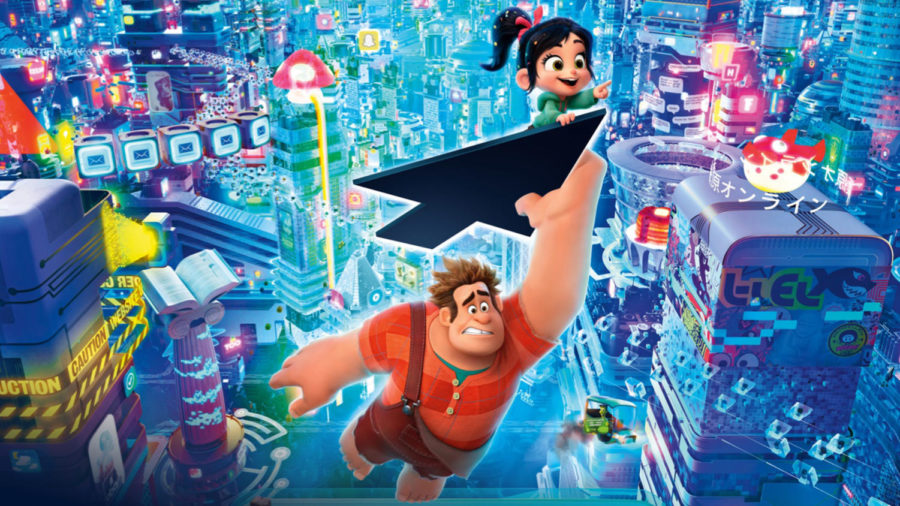 A promotional image for the movie (Courtesy of The Avalon Theatre).

Disney movies are the iconic representation of innocence, joy, and love that shapes the childhood of many people. When people think of their youth, they often imagine their favorite Disney movie. That is why I always thought of “Wreck It Ralph” as a part of my innocence. I was 10 years old when the first movie came out in 2012, and I remember my sister and I begged my mom to take us to see it. When we finally got to witness it, we both were astonished by the creativity the first movie brought to the screen. The villain, Ralph (John C. Reilly), of an old arcade game called“Fix-It-Felix,” learns to love, value friendship, and be the good guy outside the game. He has help finding himself with another video game character, Vanellope Von Schweetz (Sarah Silverman) from the arcade game “Sugar Rush.” Together they go through an amazing journey where they eventually become best friends.

After six years, Disney decided to make a sequel called “Ralph Breaks the Internet” which premiered on Nov. 2. The PG rated, 112 minute sequel expands on the original film. The friendship of Ralph and Vanellope is still going strong after six years. During the day when the two video game characters go to their jobs in their games. However when Vanellope’s game “Sugar Rush” breaks, the arcade decides to shut down it down by unplugging it. This leaves Vanellope and all other characters in “Sugar Rush” stranded with no job. Ralph and Vanellope decide to save her game by virtually leaving the arcade to join the world of the internet.

Compared to the arcade world, the internet is another technological dimension that holds media platforms that we all know today such as Google, Snapchat, Twitter, Amazon, and more. Ralph and Vanellope explore the internet as they look for ways to save “Sugar Rush”. They come across many new characters such as Yesss (Taraji P. Henson), Shank (Gal Gadot), and KnowsMore (Alan Tudyk) that assist them on their quest. During their travels, Ralph and Vanellope learn to grow even more as friends, and in the end they overcome their internal conflicts by accepting each other’s dreams.

Overall, I applaud the directors Phil Johnston and Rich Moore for their imaginative and creative details that brought the film to life. The way the internet world and technology were presented was genius and hilarious. I found myself laughing out loud at many of the witty references. On the other hand, there were moments in the movie where plot seemed to slow down and become repetitive. Nevertheless like every Disney movie, the kid-friendly film possessed a heartfelt lesson to teach young kids. The overall message was to embrace your friendship with one another, and respect each other’s aspirations by always being there for each other. The movie was very positive and entertaining with a good way for kids to realize to cherish their friendships, yet I still enjoy the first “Wreck It Ralph” than the sequel. It may be that I am older now so I don’t see the movie the same as the old 10 year old me, but I feel that the first film has a better, non-cliche plot. Although I would see “Ralph Breaks the Internet” again, I would rather watch the first “Wreck It Ralph” for the 100th time.