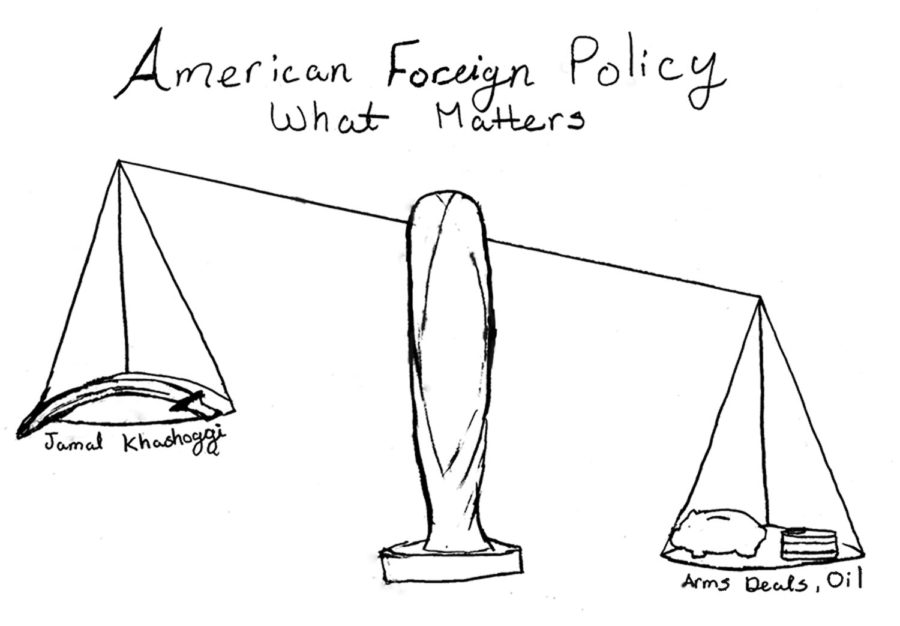 Jamal Khashoggi walked into the Saudi Arabian consulate in Turkey on Oct. 2, but he would never come out alive. Almost a month after Khashoggi disappeared into the consulate, his disappearance is still captivating the world—and complicating the United States’ already tricky relationship with Saudi Arabia.

Khashoggi was a formerly a resident of Saudi Arabia and even served as an adviser for the Saudi government. However, his opinion on the kingdom would drastically change over the course of his lifetime.

He made an about-face. While formerly being affiliated with the monarchy, he became one of the kingdom’s most vocal dissidents, likely the reason why Khashoggi is no longer alive.

Khashoggi wrote for the Washington Post’s Global Opinions’ section on the topic of Saudi Arabia. He did so very critically. He was in self-imposed exile in the United States, but his criticism still rang loud. But today he can criticize no more. Now, he is dead—likely at the hands of his former government.

For his final column—which was published weeks after his disappearance posthumously—Khashoggi tackled the very issue that his murder has thrown into the national and international spotlight: the death of free expression in the Arab world and Saudi Arabia in particular.

He wrote the column on the area’s political environment. He wrote about an environment where a dissident journalist for a major U.S. newspaper can be lured to a consulate to be, according to reports, dismembered by a foreign government.

“Arab governments have been given free rein to continue silencing the media at an increasing rate,” Khashoggi wrote. “There was a time when journalists believed the internet would liberate information from the censorship and control from print media.”

But he pointed out that those aspirations and hopes have not come to fruition. His case is incredibly strong evidence of that.

“They have also arrested local reporters and pressured advertisers to harm the revenue of specific publications,” he wrote. As his case shows, the governments don’t just arrest—they murder.

The continually changing narratives presented by the Saudi government is clear evidences of the validity of Khashoggi’s concerns. His case underscores, in present day, the complete lack of accountability that Khashoggi tackled in his last column.

First they claimed he left the consulate on his own terms. Next they said it was perhaps rogue actors who killed him. Now, the Saudi government seems to be trying to quell the anger that the murder of Khashoggi has created, arresting 18 individuals for their alleged involvement. But many still believe the call to murder Khashoggi may go up even higher in the Saudi Kingdom. Perhaps, as evidence has suggested, even the kingdom’s crown prince Mohammad bin Salman.

The situation is made even more complicated because of the U.S.’s unique relationship with Saudi Arabia. The strategic alliance between the U.S. and Saudi Arabia—despite the country’s rather troubling human rights record—has led to many vociferous objections from politicians on both sides of the aisle. But when push comes to shove, there doesn’t seem to be much change brewing.

While Khashoggi’s murder still hasn’t faded tcompletely, it has certainly faded into the inner pages of the newspaper. In his last column, Khashoggi made note of that repeated trend.

“These actions no longer carry the consequence of a backlash from the international community,” Khashoggi wrote. “Instead, these actions may trigger condemnation quickly followed by silence.”

While Khashoggi’s death is undoubtedly egregious, he is by no means the only journalist to die in the pursuit of the truth. What makes Khashoggi’s case extremely unique is that he wrote for a major U.S. publication—the Washington Post, one of America’s premier newspapers. But in 2017 alone, 66 journalists were killed worldwide, 46 of whom were killed almost undoubtedly because of their work, according to the Committee to Protect Journalists.

Journalism is not a career for the weak of heart. Journalism is work that is of incredible importance and can have incredibly impact as well. That is a major draw for aspiring journalists but it is also a major risk as well.

When an organization’s coverage does not adhere to the wishes of the people in power—especially in a country where press freedoms are by no means guaranteed—one’s journalism can lead them to paying the largest price: their life. If that means anything, it means that their work is even more important.