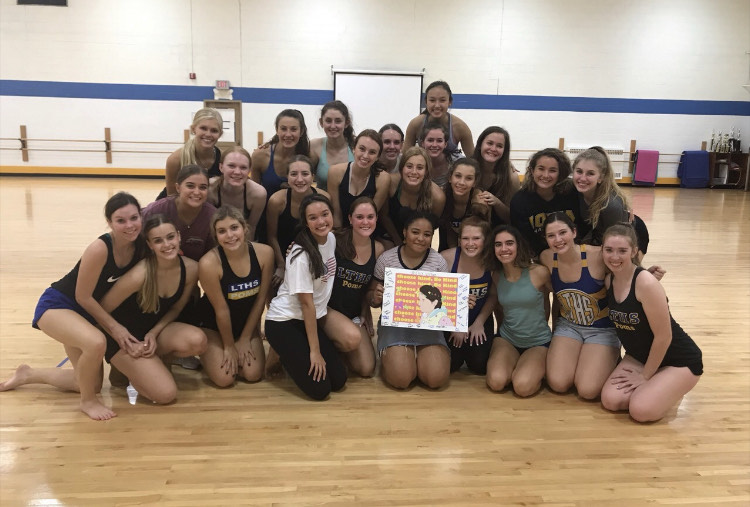 Beginning her junior year as an LT student, Tatiana Thomas ‘21 knew she wanted to make a difference. Inspired by her latest read, “Girl Made of Stars”, Thomas sparked an idea. She wanted to show girls at LT that they are worthy of love and success. In an effort to carry out her aspirations, Thomas has decided to launch a first of its kind campaign. She calls it, Worthy Women.
“I wanted to make an impact on the girls at LT, in whatever way possible,” Thomas said.
Every two weeks, Thomas selects a group of girls from a club or sport as her Worthy Women recipient. Once Thomas selects a group, they are read a customized speech, given a poster to sign, and a picture of the team with Thomas.
The drive behind the campaign comes from an unpleasant time in Thomas’ life when she was mistreated by another female peer.
“In sixth grade I was bullied by someone who I thought was close to me,” Thomas said. “I wouldn’t want anyone else to go through that, so I think it is important that girls build each other up.”
The first LT student Thomas chose to share her idea for her campaign with was Ellie Junius ‘21. Thomas told her she was interested in starting a campaign to support and display the hard work of LT females, Junius said.

“I thought it sounded awesome, especially because of how much LT lacks female
empowerment and kindness between female teams,” Junius said.
The week of Sept. 23, Thomas began to put her ideas into action. Thomas informed Michele Vieu, junior guidance counselor of her plans.
“I thought it was an outstanding idea,” Vieu said. “At LT we are fortunate to have students like Tatiana making great strides toward strengthening and empowering our students and community as a whole.”
When selecting a group of young ladies to recognize, Thomas looks for the qualities of togetherness, respect toward one another, and determination.
“I think these qualities are so important in a group of females, because often times girls tend to treat each other poorly, which makes no sense to me,” Thomas said. On Monday, Sept. 30, at 5:30p.m., in the North campus dance gym, Thomas presented the LT poms team as the first recipient for the Worthy Women Campaign.
“I chose poms because they dance at all the home football and basketball games, and I feel that sometimes they are overlooked and underappreciated by the student section,” Thomas said.
LT poms members, including Ella Bylsma ‘22 were moved by Thomas’ words to the team.
“It made me want to continue to be nice to girls no matter who they are,” Bylsm said.
Thomas would like to grow the campaign so it can be recognized among the LT student body. She plans to do this by putting up post it notes with positive messages in all the girls’ bathrooms at North campus. With more funding, Thomas would also like to pass out Worthy Women stickers to LT girls, so that her message reaches girls who do not participate in any sports teams or clubs. Thomas will rely on mentors like Vieu and Junius to guide her through leading a successful campaign.
“As her counselor, I will continue to support and guide Tatiana as she pursues
her passion and movement,” Vieu said.