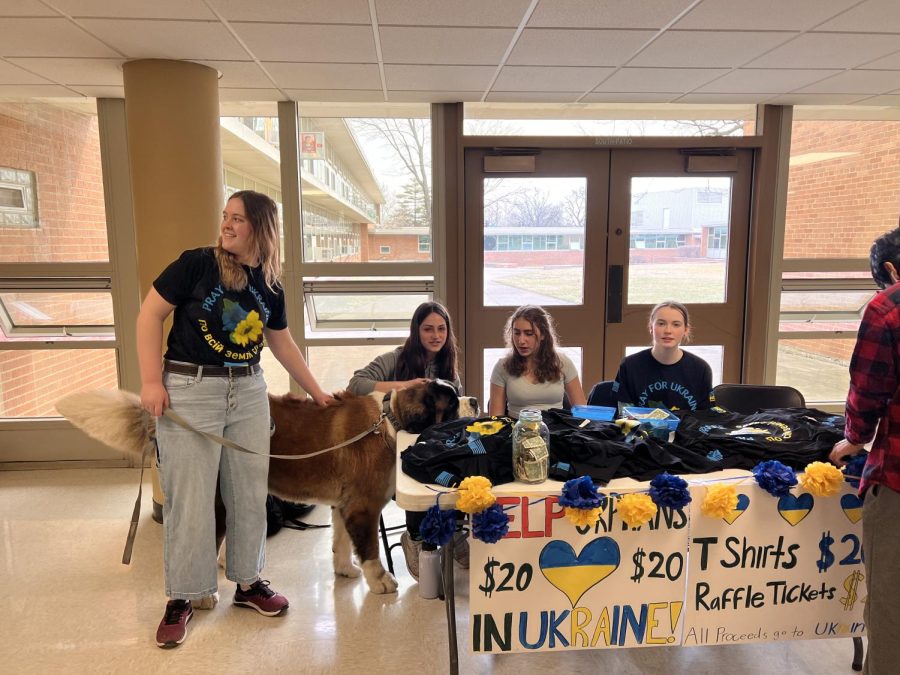 Inspired by her family’s nonprofit organization that employs at-risk veterans, Rags of Honor, Penelope Cornell ‘25, with the help of PSI (Peaceable Schools Initiative), organized a three-day fundraiser before spring break to raise funds for Ukrainian orphans. The fundraiser sold T-shirts for $20, designed by a Navy vet from the nonprofit, as well as offered a raffle prize and accepted donations from all.

“Many students and staff wanted to help, but didn’t know where to start or what to do,” Cornell said. “Since we have such a large reach with over 4,000 students, my aunt and uncle asked me to help. I then began the process [of] a full fundraiser.”

Cornell, as a member of the club, approached PSI sponsor Annette Orrico to help with the behind-the-scenes work that goes into a fundraiser, Orrico said. The shirts were sold for three days during lunch periods at both campuses, and the total donation from the sales came out to $2,500.

“We are in such a tight-knit, giving community, always wanting to extend our resources and privileges to others,” Orrico said. “I think it’s natural for our students to want to do something to help [people] in an area that’s feeling such devastation.”

T-shirts are still up for sale and can be purchased on the Rags for Honor website, Cornell said.

Within the same week from March 23 to March 24, Interact club also collected donations to send to the children of Ukraine. With a quick turn-around and a personal connection, club sponsor Cheri Price worked with students to fundraise money to send to the country through the humanitarian group United Nations International Children’s Fund (UNICEF).

“My nephew is from Kherson, Ukraine, so I talked to our club president and was like ‘I’d really love to do something,’” Price said. “This really is what [Interact’s] purpose is.”

With donations being collected in the libraries over the course of two days, Price and the club’s members were able to make a check out for $450, Price said.

Additionally, paraprofessional Dainora Baliutaviciene arranged a sleeping bag drive from March into the spring quarter. Collections were located in the libraries at both campuses.

“I wake up with the news [about Ukraine] and I go to sleep with the news,” Baliutaviciene said. “As a small person, I couldn’t do much. But, it was a small thing that was the least I could do.”

With family in Ukraine, Alina Predolyak ‘22 and her family wanted to do their part to show support, Predolyak said. Her brother started an organization called Help Heroes Of Ukraine, which has already raised an estimated $3 million to be sent over. The sleeping bags collected will be sent through the organization.

“[Ukrainian children] are our age,” Cornell said. “They are like us and they were thrown into a war, losing everything they once knew. We cannot alter the past, and accepting that is hard, [but] we just try to do the next right thing, no matter how miniscule or daunting the task.”