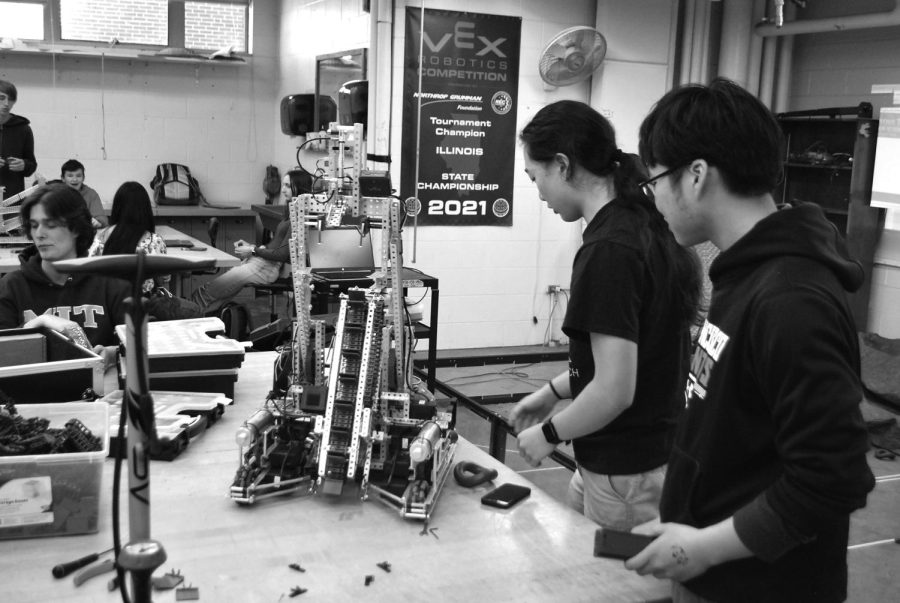 Based on their top 15 team finish in the Illinois State Championship, the Robotics C team qualified for the VEX Robotics World Competition, which took place in Dallas, Texas on May 5, 6, and 7. The competition included approximately 800 teams from across the country and internationally, with countries such as Australia, Ireland, and Japan competing.

“Seeing all these people come together from around the world for one thing was what I [was] most excited about,” Robotics C team member Tyler Vizgirda ‘22 said.

This year, the competition required robotics teams to build a robot that could manually pick up hexagonal goals, Vizgirda said. The object was for the robot to bring the most of these goals over to its team’s side to earn points. In addition, there were small rings, and if the robot placed the rings on the goal prior to bringing the goal back, the number of points earned increased. Each round of the competition was one minute long, with the first 15 seconds being autonomous, meaning the robot scored points based on what it was pre-programmed to do. The remaining 45 seconds were driver controlled.

Initially, at the state championship, LT’s robot included two claws that could both raise and lower to pick up goals, Vizgirda said. However, this robot was not made to collect many rings. Teams that placed higher in the state championship used rings to their advantage, so LT robotics worked to rebuild their robot to collect more rings and maximize their points. For the World Competition, the robot included one claw that could raise and lower and one that lifted and stacked rings.

“It’s really interesting to listen to them [talk] about when they come across a problem and to see the experience they get when they figure out how to solve that problem,” Robotics coach Blake Sauders said.

The team also prepared for the competition by watching videos of other robots to determine the best strategy in balancing getting the most goals and enough rings to earn more points, Vizgirda said.

In addition to the C team, another LT robotics team, called the D team, competed at the World Competition. As opposed to qualifying for the competition through the Illinois State Championships, they qualified by submitting a poster to an online tournament. The tournament was available to everyone world-wide, and the D team won the poster design contest which required students to create posters advertising VEX Robotics, Saunders said. The D team will be competing in the same way as the C team despite qualifying in a different way.

“Worlds is my high school dream,” Robotics D team member Vasiliki Fournier ‘24 said. “So getting to do that as a sophomore is really cool.”