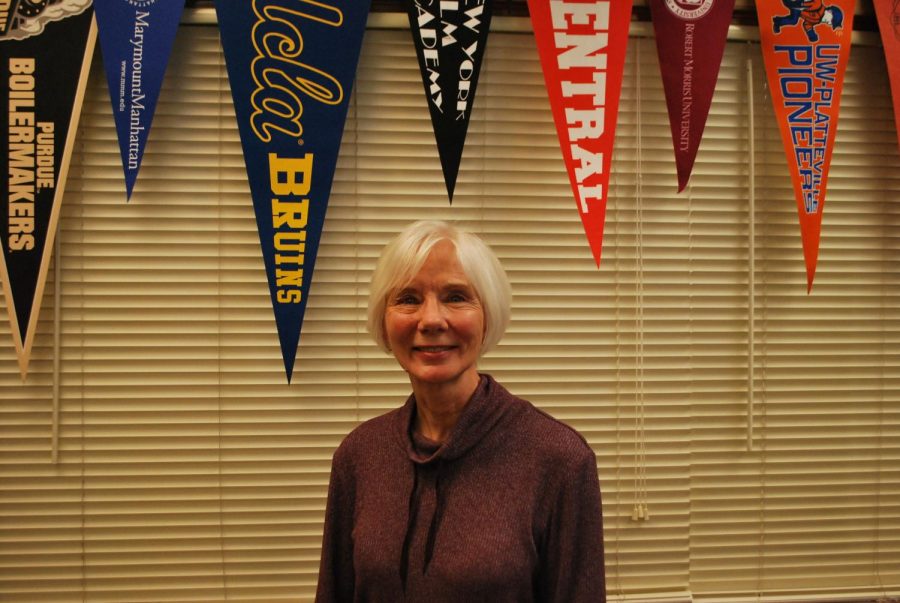 Lianne Musser poses in the College/Career Center, where she has worked for 16 years, on April 19 (Mosqueda/LION).

For the past 16 years, Lianne Musser has served as LT’s College Coordinator, assisting students with their post-secondary planning. At the end of the 2021-2022 school year, Musser will retire from her position and leave her office in NC Room 148 for one last time.

“Her help was very beneficial to me,” Ryan Murphy ‘22 said. “She helped me with an application for an honors program. I felt like she really cared about how I did.”

During Musser’s time at LT, she, along with fellow staff members, have helped change the way that post-secondary planning is looked at and approached, she said.

“When I first came here, I felt like a lot of the emphasis was only on the top 10% [of students],” Musser said. “I worked very hard to make all students feel like this [College Career Center] is a place where they can go to pursue their college goals.”

One of Musser’s biggest accomplishments was removing class rank in 2012, she said.

“I spearheaded the effort to remove class rank,” Musser said. “It really benefited a lot more of our students. Our median weighted GPA right now is 3.95. That means that if your GPA is below that, you wouldn’t even be in the top half of the class. This would make a student look like they aren’t very strong, when in fact, they are. It wasn’t easy to do this since LT is a school of tradition.”

Musser attended and graduated from Morton West High School in Berwyn, she said. She pursued a bachelor’s degree and graduated from Western Illinois University. Musser then student-taught in Puerto Rico as an English and Spanish teacher. Following that, she taught at Oak Park-River Forest High School, as well as a small school outside of the Quad Cities in Geneseo, Ill.

Musser took a break from working in education to help her father open a hardware store, she said. While working there, she trained and hired new staff.

“That [working in the hardware store] helped me in being able to now help prepare students with job interviews and in how you should approach a career,” Musser said.

Following this, Musser went to graduate school and pursued a Masters in Counseling, she said. She had been inspired to do this by a youth group at a church where she had been working. After graduation, she became a high school counselor and then transitioned to college counseling.

“College and career is a good fit for me, because I’ve worked in a number of careers,” Musser said. “I’ve run a business and I was actually a Blackjack dealer at one time. I think that sometimes, from a high schooler’s perspective, things look linear. Life doesn’t really happen that way.”

Musser then moved to the position of a counselor at Hillcrest High School in Country Club Hills, she said. As a counselor, she was in charge of providing college information to students.

Musser was initially doubtful that she would be hired to work as the College Coordinator at LT because they had such a “prestigious reputation,” she said. When the job first opened up, she did not fill out an application but did not submit it. When the position opened up three years later, she then submitted the application. Musser was hired two weeks before the start of the school year in fall 2006.

“I’ve always known about LT and the high quality of education here,” Musser said. “The college-going mindset of this community and the value on higher education drew me here.”

“We’ve been a great team together,” Svozil said. “Mrs. Musser has really been a big asset to this school. Her knowledge has been really helpful to the students at LT and it’s really been phenomenal.”

During their time at LT, Musser and Svozil have jointly planned the annual college fair, managed scholarships, and have put together all of the programming, including the Senior Honors Program, both said.

“The changes in this office are not just changes that I’ve made, but also changes that my fabulous coworker has helped make,” Musser said. “She really is not my Administrative Assistant, she is my coworker. When I’ve said ‘Gee I have an idea,’ she’s said ‘Let’s make it happen.’ We’ve always figured out how to do things together.”

After retiring from LT, Musser plans on doing pro-bono work for students who do not have access and resources relating to college information, she said. She also plans on traveling to Europe for a month with her husband.

“I’m excited to be able to travel,” Musser said. “Being on a teacher’s schedule, I’ve never been able to travel in the fall, it’s always been summer or Easter break or winter break.”

Musser’s successor in the fall will be Cody Daily, who is Victor J. Andrew High School’s current Student Success Specialist, which is a role similar to the College Coordinator, Musser said.