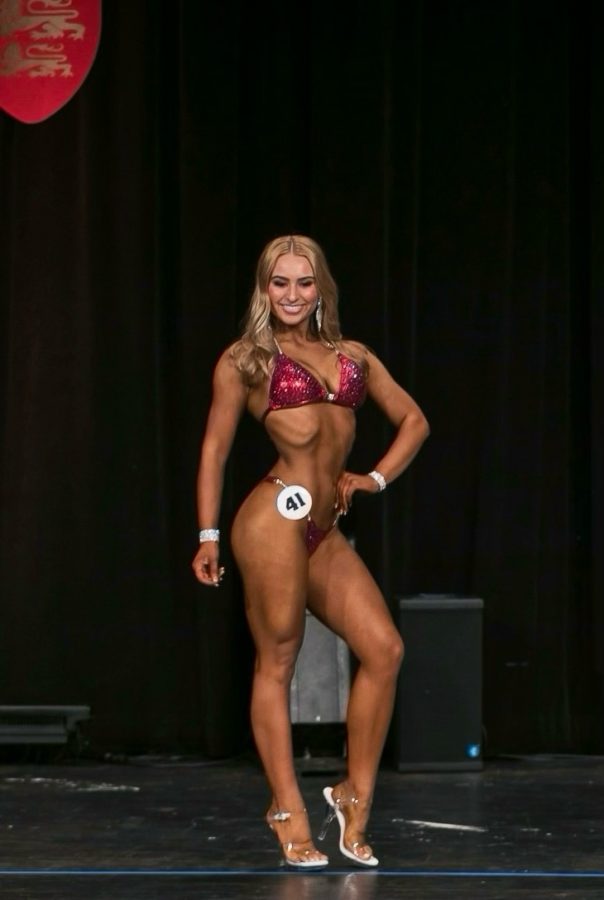 Isabel Blackstone ‘22 had been lifting for nearly a year and a half, when she decided she wanted to take her passion to the next level. After following professional bodybuilders like Lauren Dannenmiller on social media, Blackstone was inspired to compete in a bodybuilding competition herself. In July of 2021, she geared up to complete three months of preparation for her first ever competition.

“When Isabel brought up the idea of wanting to compete, I didn’t realize how serious she was about it,” her mother Regina Blackstone said. “I was surprised and had no idea about the [preparation] that went into the competitions, so I had a lot of learning and research to do.”

In order to be a serious competitor, Blackstone had to consistently work out, follow a strict diet, and learn proper bodybuilding poses, she said. She went to The Local Workout in La Grange for two hours, five days a week, where she focused on building and toning muscles in her arms, back, chest, and shoulders. She mainly trained by herself in her last two months of preparation, but received guidance from personal trainer Kyle Wolfe in the first month.

Blackstone also had a nutrition coach, Kyra Chessman, who created Google Spreadsheets so Blackstone could log the foods she consumed. In the beginning of Blackstone’s preparation, Chessman had her focus on getting a lot of calories to build muscle. As she slowly began eating fewer calories week by week, Blackstone ate more complex carbs to help keep her full. In addition, she sent weekly pictures of her physique, so Chessman could monitor her body progression.

“The progression pictures were like the main puzzle piece to keeping track of how [Blackstone was progressing],” Chessman said. “I also wanted to make sure that I was reminding her that it was important to stay healthy mentally as well, as a lot of girls [can] have poor body image.”

In order for judges to see her body from different angles, Blackstone had to flow through various poses in her competition. These poses were unfamiliar to her, so she worked with posing coach Kate Lane, who taught her the different stances she would need to take while posing. She worked on a front, back and side pose in order to be ready when judges called out the poses on competition day.

After finishing the intense months of preparation, Blackstone competed in her first ever

bodybuilding competition on Oct. 9 at Jefferson High School, in Rockford. She stayed at a hotel close to the high school, and had to wake up at 3:30 a.m. to get her hair and makeup done the day of the competition. She also received a dark spray tan the day before, in order for the judges to see the definition in her muscles under the stage lights.

“I was so nervous to get on the stage [where the contestants were judged],” Blackstone said. “Honestly, the minute I got on, it felt so surreal, and like I was stuck in time.”

Blackstone competed in two classes in the bikini division at the competition. Classes are how the competitors are separated. She was in Novice Class B, for first time competitors, and a second open class for any women between five foot two and five foot three feet tall.

“When I was moved to the end [for the second class], I thought oh well, you win some, you lose some,” Blackstone said. “It was a nice surprise when I ended up getting second at the awards.”

At awards, she also received first place in her first class.

Blackstone and Regina were very impressed by the support she received from other competitors at the event. Even though Blackstone was the youngest competitor, at age 18 (the competitor closest in age was 23), she was able to make friends that she still keeps in contact with.

“Everybody there was very nice,” Blackstone said. “The environment was super supportive and it was a really good community.”

Blackstone was also able to qualify for a national show, which is scheduled to take place on June 17 in Tennessee. While she is currently taking a break from her strict diet, she is still trying to build muscle in the gym. She plans to start her diet and preparation phase again in February.

“I think if you’re not involved in [bodybuilding], it can be really hard to understand it,” Regina said. “It’s not all like Arnold Schwarzenegger. It’s really about building confidence and fitness in a really supportive environment.”