Creates platform with science, history based content for teens 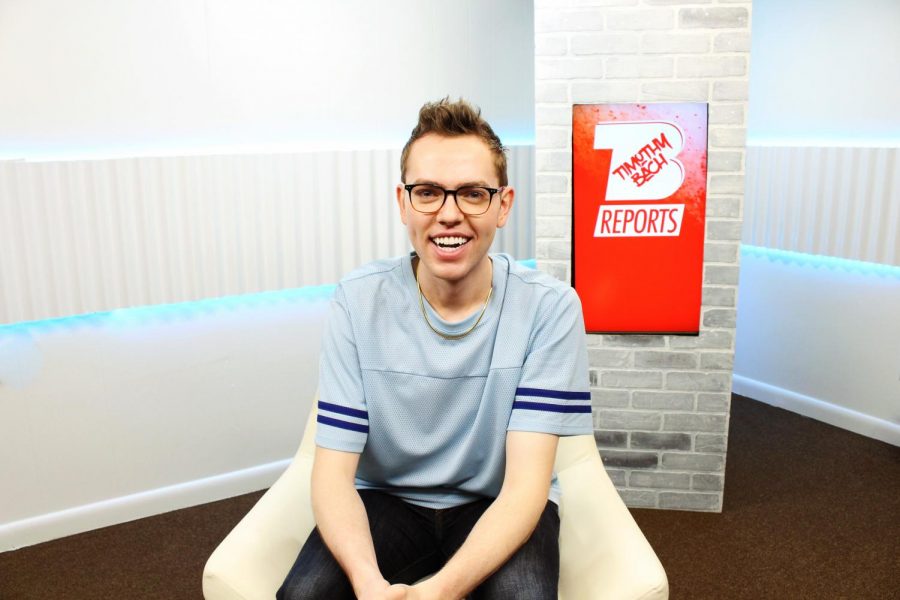 Timothy “Timo” Bach ‘16 entered ninth grade as a shy, slightly introverted student, he said. He was enrolled in LT’s Humanities block and was able to grow as a student and as a person while participating in these classes.

During his years at LT, Bach went by “Timothy Grider” but later changed his name to Bach in 2018. He was guided throughout his high school career by various mentors, and this set him on track to becoming an “influencer” on multiple social media outlets.

English teacher Amy Johnson had Bach as a student in Humanities reading, she said.

“It’s so interesting to see who he is now, because as a freshman he was so quiet,” Johnson said. “He would have really interesting one on one conversations with me and some of the other adults, but he was not like this larger-than-life personality that he is now. It’s exciting to see his transformation and evolution.”

Bach came into LT with a fourth grade reading level, due to the fact that he was challenged with dyslexia, he said. When he graduated, he was at a 12th grade reading level. Social studies teacher John Cronfel, former LT teacher Eric Bjornstad and Johnson were the first teachers who helped him feel like he could amount to more than he was.

There was visible growth in Bach’s personality throughout his time at LT, Cronfel said. He initially was very timid but started gaining confidence, especially in debate settings in class and in Model U.N..

“These people at LT fought for me and showed me that I could succeed,” Bach said. “I credit LT for opening the boundaries of what is possible.”

Although Bach did not show an interest in science while attending high school, his passion for this subject grew when he went to college at the University of Illinois in Chicago (UIC), he said. He had initially planned to focus on politics, but was given the opportunity to apply to the Northwest Passage Project—a program funded by the National Science Foundation, which focuses on researching climate and marine life in the Canadian Arctic. Throughout this time, his passion for media production developed, as he was working for a television station.

“It blows me away that his content has to do with science, because I never knew he was a science person,” Cronfel said. “I always thought he was more of a persuasive debater. He was always open-minded and willing to try new things, though everything is always pretty easy if you come in with an open-mind.”

Post graduation from UIC in 2019, he attempted to build his own news show, “News for Gen-Z by a Gen-Z.” At the same time, he applied for broadcast television roles, he said. He then created YouTube shows called “Science IRL” and “History IRL” based around content from those subjects. Bach started creating content on Tik-Tok for his “Science IRL” account and gained popularity from there.

“During the pandemic, I really went through a journey, because that was when I really started taking off,” Bach said. “The fact that I could mentor and speak with kids that were a little younger than me was great. I started gaining partnerships with big name companies [too].”

Throughout 2020, Bach started hiring staff to work as writers, video editors, social producers, and in marketing; he eventually had eight full-time employees, he said. He was also appearing on television and radio shows such as NBC5, Windy City Live, and WGN Radio. He too, created his own LLC, The Creator Factory, which is available for hire in creating video and photo production content.

“My passion is really for Science and History IRL,” Bach said. “However, I have been working on other stuff, and the focus of the digital talk show that I’m creating is to expose people to jobs in different fields that they never would have heard of. I also want to help students pursue STEM (Science, Technology, Education, Math) jobs as well.”

Bach is planning on releasing about three months worth of content, which includes about 15 videos relating to history and 45 to 50 videos for Science and History IRL, he said. He also plans to put on a monthly science camp for middle school students, due to requests from parents in  the LT area.

“I want every single person in the world to be an influencer, but I want to redefine what that term [influencer] means,” Bach said. “When I think of an influencer, I think of someone who is using their mind to create something that impacts others. I just want everyone to know that no matter what race or gender identity you are, you can be great at science and you can do anything you want.”