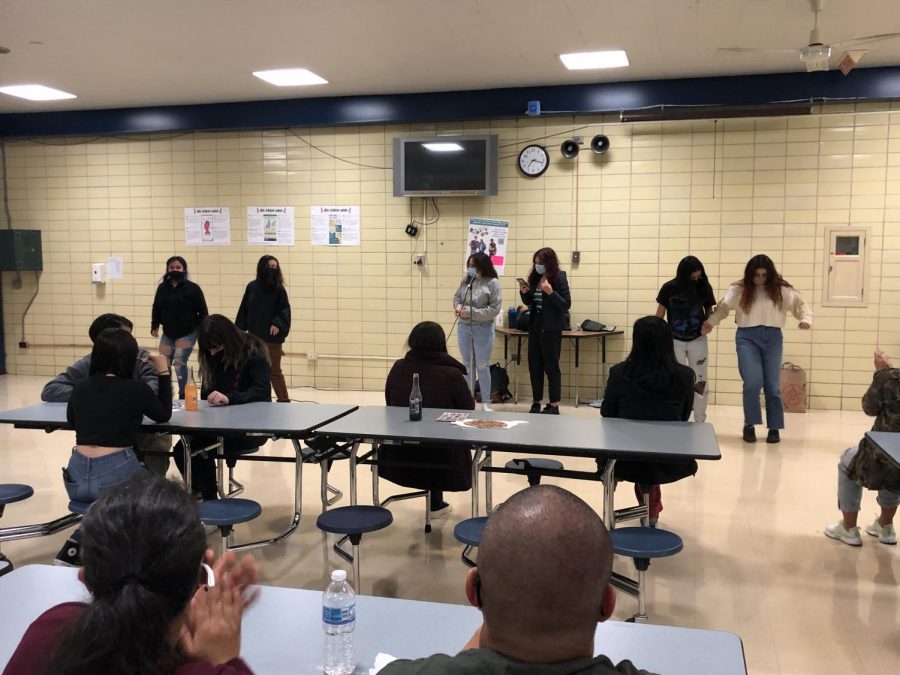 Latinos Juntos hosted an event on Nov. 5 open to all in the SC Sophomore Cafeteria based around a game rooted in Latinx culture – Lotería. The game, which is similar to Bingo, centers around placing markers on tiles called out by an announcer. The theme for this event was “millennial lotería,” which included tiles such as “el web design,” “el drone” and “el healing crystal.”

“I like showing my culture and sharing it with everyone,” Latinos Juntos club member Samantha Villareal ‘25 said.

Much of the evening was focused on the people attending, chair member of Latinos Juntos club Mia Ontiveros ‘23 said. There were lunch tables set up, which allowed friends and family members to sit next to each other. Roughly half of the attendees were parents and family members of LT students. The most important part of the event was the community, but the game itself, snacks, and accompanying rewards added to the positive environment, Ontiveros said.

“Having everybody here and playing the game [was] so cool,” Ontiveros said. “I just like the fact that we’re all here to have fun.”

Prizes included gift cards, candy, scrunchies, and pens. Those who showed up to the game night had the option to buy snacks, such as Takis and conchas–a baked good also unique to Latinx culture.

“Advertising is something that we need to do better,” Mosqueda said. “This is our first big event, so we’re kind of learning from this [for future events].”

Despite this, there were still a total of 70 students that showed up.

“I feel like we should definitely do more social media advertis[ing] and going around the school to hang up posters,” Ontiveros added. “The announcements [too]; we had [announcements] once, but I feel like once is not enough.”

There will definitely be more Lotería nights in the future, all with the aforementioned improvements added, Mosqueda said.