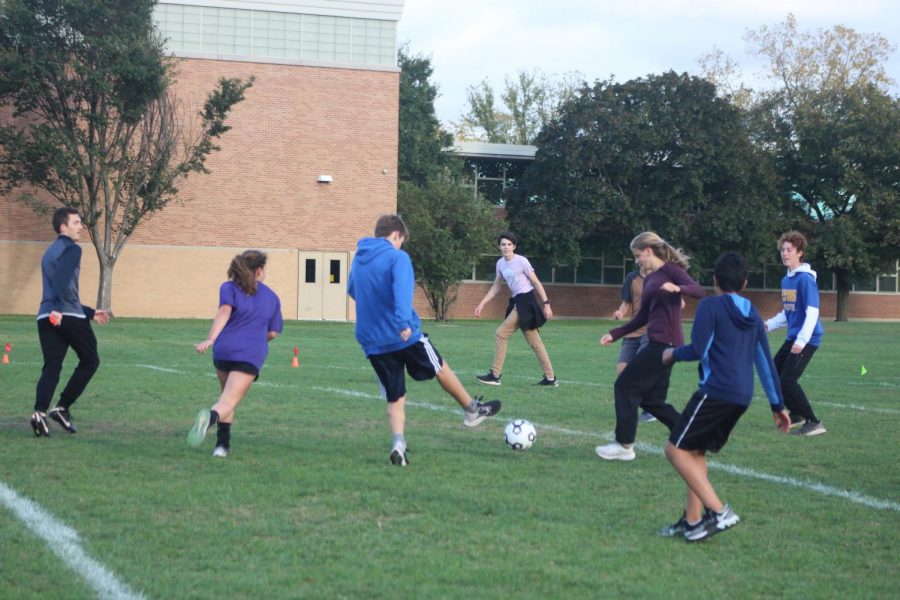 Students in Latin club compete against students in French club on Oct. 21 in the final soccer match on the fields behind SC (Wolf/LION).

“It’s really not about the win, it’s more about participating, having a good time, good sportsmanship, [and] collaborating together,” Ciaglia said. “We really stress that when we meet with our students, and [also on] the actual day of the LT World Cup. [This way], everybody is respectful of one another, because it gets pretty intense.”

The local tournament was started more than 10 years prior by a former German teacher, Karen Hoobyar. The current German teacher, Shannon Murray, is continuing the tradition by having the German club host the event and rewarding the winners with a prized golden squirrel trophy.

The cup had student organizers to help with certain aspects of the games. German club officers Alex Ledajaks ‘22 was the game planner and scorekeeper, Cam Kline ‘22, was the coach, George Scodro ‘22, was the runner—doing a little bit of everything, and Claudia Kupec ‘22, was the member oversight—assisting non-officer members off the field and telling them when they should be playing.

Something new to this specific year is the addition of the Business club to the competition, Ledajaks said. Upon introducing the unique idea to Business club sponsor Jeremy Vrtis, he approved.

“I’m excited that the World Language clubs have opened up to invite other school groups [to join the world cup],” Vrtis said. “Hopefully we will start a trend of additional clubs participating in the fun event.”

Clubs wore a certain color to help identify each team. Italian club was green, French club was blue, Latin club was purple, German club was red, and Business club was black. Each game lasted eight minutes, with a round-robin type of system, where each club played all other clubs. The team with the lowest score was then eliminated. Two more separate tournaments followed, and the winners of each had a final competition, Ledajaks said.

The cup aims to unite language clubs and celebrate cultural diversity as a World Language and culture community, Murray said.

“Sports bring people together in a way that they would probably not normally come together,” Murray said. “[The different language students] all have one thing in common—they are passionate about what they are playing.”

This year, the French club took home the golden squirrel after defeating Latin in the final round with a score of 2-1.