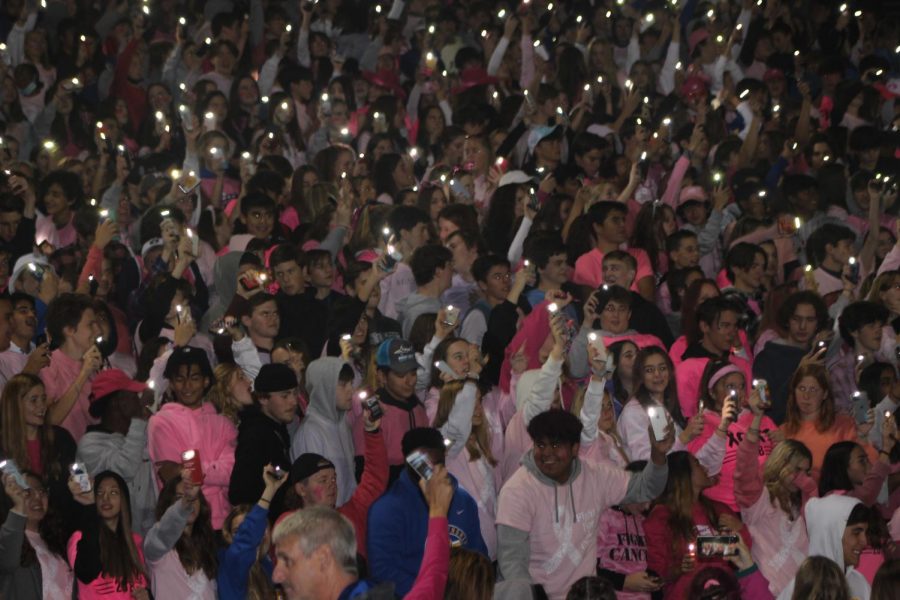 Students raise up phone flashlights at the "LT Pink Out" game (Burke/LION).

Future Healthcare Professionals (FHP) club at LT worked throughout the month of October to acknowledge National Breast Cancer Awareness Month, club sponsor Sylvia Tanious said. The students in this club have participated in and planned multiple activities to spread recognition on this topic. FHP started raising awareness for this specific cause in 2015, but have incorporated a new event this year.

“This year was our first year doing the pink powder [at the Pink Out football game],” Tanious said. “It was really exciting to be able to get everyone hyped and it was a great way to let people know that we are doing this. We got a lot of donations during half-time, so it was really awesome to see the community get involved with us.”

The pink powder was made of corn starch and pink food dye, FHP board officer Beaudan Brown ‘22 said. The powder was then put into individual cups and handed out to members of the crowd for them to throw.

“This was a fun and exciting way to grab the crowd’s attention,” Brown said. “It showed that our school was putting in effort into spreading awareness [about breast cancer], and it showed that doing good can be something fun.”

In addition to this newly formed tradition at the football game, FHP sold pink cotton candy, and gave out tattoos and pins, Tanious said. Both NC and SC were decorated with pink decorations, pink ribbons around the trees, and window paint on Oct. 9.

Throughout the month, FHP members walked around school carrying a designated container to collect donations, Brown said. These containers ranged from decorated milk jugs to pink rain boots; both cash and change donations were accepted. At the end of the fundraiser, $4,000 was collected and sent to the Breast Cancer Awareness Foundation.

Typically, the club sells pink cotton candy and shirts for the annual “Pink Out” football game to raise money for The Breast Cancer Research Foundation, Tanious said. This tradition was started because previous students wanted to bring more recognition for breast cancer awareness throughout the month of October. Prior to 2015, FHP did not have anything organized for breast cancer awareness, but sports teams did have individual “Pink Out” games during their respective seasons. These individual games inspired students in FHP to partake in the greater commitment of a whole month of acknowledgement for this specific topic.

“During the month of October, we want to spread as much awareness about this as possible,” Brown said. “We ask our community to help support research for this harmful cancer, because we want to help out those affected as much as we can and we want to try to make a change.”