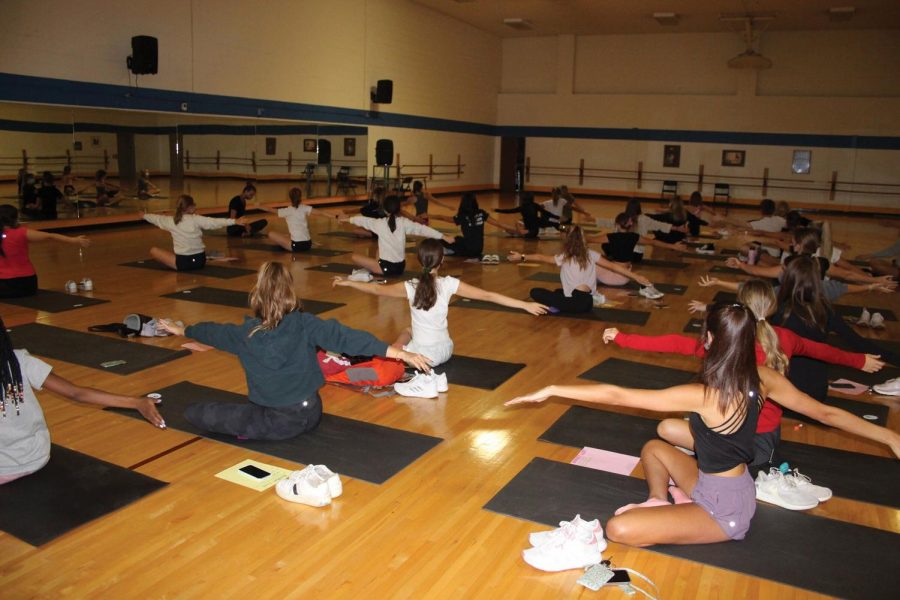 Students at the Yoga and Wellness club in NC dance gym (Gee/LION).

When Julia Reilly ‘22 was looking to go to a yoga class roughly two years prior, she was disappointed to find how expensive they were and realized that the classes were not aimed towards teens. Upon talking to Chloe Reynolds ‘22, they recognized not only the need for the LT club, but that they could create one. Sept. 8 at 7 p.m. kicked off the very first Yoga and Wellness Club, with roughly 30 people in attendance.

“I wasn’t really being active that much due to the pandemic and my sports being cancelled,” Reilly said. “I think that yoga is a great thing for your body and your mind.”

What’s special about this particular club beginning at LT is that there are plans to have both staff and students participate, club sponsor Cassandra Niego said.

“I think this club will be enjoyable for many,” Niego said.  “It has the potential to be unique from most other LT clubs, in that it has the opportunity to bring both students and staff together in like-minded activities, working side by side.”

The original Yoga and Mental Health Club was proposed at the same time that Natalie Shurla ‘22 had proposed the Wellness Club, so they combined and became co-leaders, Reilly said. Each meeting will have a stress-free environment that will also be a judgment-free zone.

“I personally had no coping mechanisms and how to cope with stress my sophomore year,” Reilly said.

This is one reason why the leaders’ goal is to have every member of the club find something to help deal with their stress. The club plans to meet every other Wednesday at 7 p.m. in the Vaughan Building