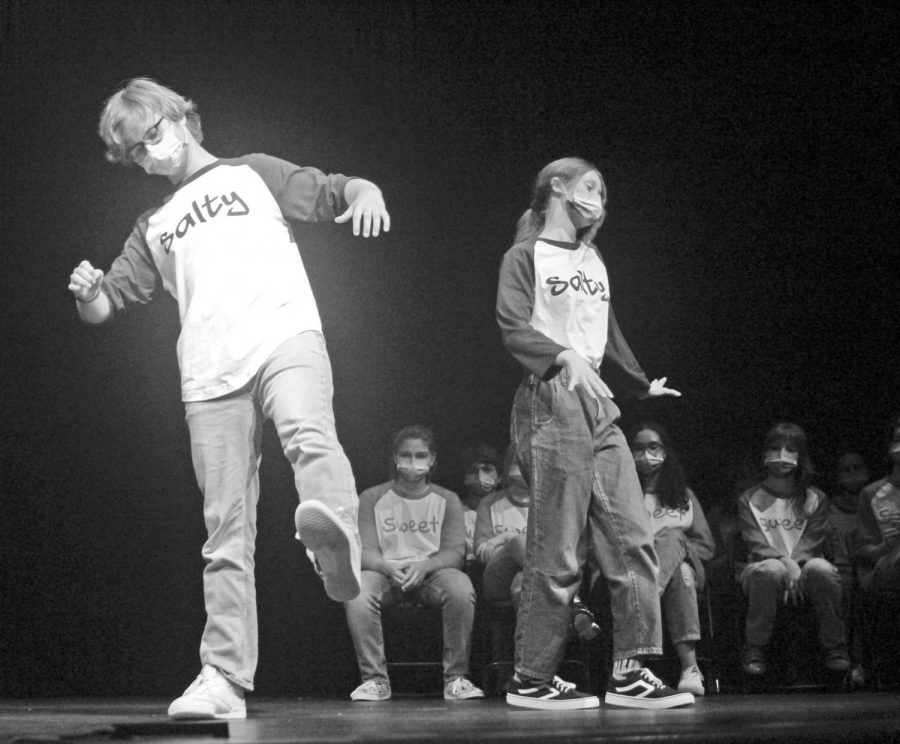 From left to right: Jake Gripp '22 and Lola Podolner '25 performing during the first show on Sept. 23 (Lestina/LION).

At the start of every year, LT hosts an improv show. This year the show was in the Reber Center at NC on Sept 23-25. They also had a homecoming week show on Sept. 28 at 7 p.m. in the SC PAC.

“It’s the kind of stuff they do in comedysportz, improv olympics, and the old show ‘Whose Line is it anyways?’,” Improv show director Mike Keuhl said.

Last year the Improv show was not held in its typical manner. The adjustments made for COVID-19 included pushing back the show until the end of first semester, hosting the show over Zoom, and casting it onto a Facebook Live.

“[The Zoom improv show] was fun, but it was totally different,” Keuhl said. “[The format] eliminated the physicality of it, which I think is some of the most fun you can have.”

This year, the 13th annual Improv show was live and in-person. The performers and audience members were wearing masks during the production and social distancing was enforced.

They have commemorated the 13th year by titling the show, “A Baker’s Dozen”.

Auditions for the show were held on Aug. 30 in the Reber Center. When auditioning, the actors were called into a room in groups of four to six, then asked to play three separate games.

“[During auditions], I see how they play with each other, how quick they are, [and] how willing they are to push the boundaries of their own comfort zones, in a humorous way,” Keuhl said.

The actors were in the Reber center after school that day waiting for their turn to audition.

“The auditions are a little nerve-wracking in the way that any audition is,” improv actor, Anna Murray ‘22 said. “But since I’ve done improv before, I wasn’t too nervous about it.”

The students selected for the show practice different improv games at daily after school rehearsals form 3 to 5:30 p.m. in the Reber Center. Once it was time for the actual show, the actors entered the stage without knowing what game they would be called up to play. They have never done the game with the situation or character that Keuhl assigns to them on the spot.

“It’s terrifying- I never could’ve done it when I was in high school,” Keuhl said.

The show had two teams competing against each other, but the competition was completely fake as Kuehl makes up the points based on audience participation. At the end, a winner is announced and the curtains close.

“The Improv show is a fun way to challenge yourself into becoming more witty and spontaneous,” Murray said.